Miles throws in many styles, and some new inventions

Get Up With It over the years has become my favorite of the Electric studio albums of Miles Davis. I will start with the Opus’, “Calypso Frelimo”, and “He Loved Him Madly”; these are sort of  Yin and Yang compositions. 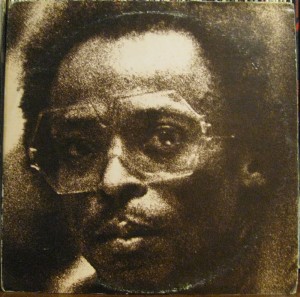 Calypso is nearly 30 minutes of unrelenting driving hard funk, with some long stretches of Michael Henderson’s droning bass lines. David Liebman plays some very nice flute, and John Stubblefield handles the sax duties, both are stellar and have plenty of ideas.

Miles jabs and stabs and is as raunchy as it gets, sounding much like a guitarist in many ways with his wah wah  pedal infused trumpet sound. Cosey and Lucas go nuts on guitar as well.

“Calypso” is an all-encompassing sledge-hammer to the senses. Funny thing about Liebman’s flute, it keeps the music grounded, offering just the slightest bit of relief from the onslaught.

“He Loved Him Madly”, the elegy to the recently departed Duke Ellington sure doesn’t remind you in any way of Duke,  this piece has become one my favorites of the Davis Electric era.

A world music flavor, and ultra slow groove, settle you in for a very relaxing journey to the center of the universe. This is probably as close to a hallucinogenic experience with music as you can have without the side effects.

Miles really digs into his entire bag of tricks, he sounds so lonely and far away in the mix, with Al Foster and Mtume providing a busy beat behind the slow bass of Henderson. The 3 guitarists adding some color, Cosey, Lucas and Dominique Gaumont. Other than Cosey I can’t really tell them apart honestly.

Liebman plays some very fine haunting flute once again.  As busy as Calypso is, “He Loved Him Madly” is very relaxing, with a simmering heat below the surface, the 2 side long tracks really compliment each other.

I always listen to the epics together uninterrupted, I would have a hard time believing Brian Eno was not affected by “He Loved Him Madly,” especially listening to his works of the mid to late 70’s.

One thing about Get Up With It, it is an album that  seems all over the map, aside from the to side long pieces. Much of the music comes from different sessions, “Maiysha”, “Honky Tonk”, and, “Billy Preston” have much more of a composed feel and commercial quality.

“Rated X” is a track that I initially didn’t care much for, talk about a track that sounds 100 years ahead of its time, maybe Krautrock from hell.  I don’t know Much about modern electronic genres, but reportedly this is a very important track to those various electronic genres. Then there is the ultra Commercial “Red China Blues” which I rather like with its straight ahead blues rock feel.

Any one who has heard Bitches Brew, and couldn’t get to a point of some sort of understanding of the electric music, you should give Get Up With It a try; it’s not as rough around the edges, not nearly as abstract, and much easier on the ears to the uninitiated.

This would be the last studio recording released from Miles for 6 years, and surely a worthy end to his prolific and controversial first electric period. When he came back, the creative groundbreaking was over, his music was safer, only We Want Miles and Aura even approach this kind of excitement and creativity.

Producer/engineer Teo Macero deserves special mention, as his cut and paste techniques, and splices somehow bring the music together from so many sessions.

In fact David liebman has said after hearing Get Up With It after it came out, he was amazed. Liebman didn’t remember anything sounding like what the product was in the studio. You can not tell the story of Miles Davis without Teo’s production any way.  I believe Get Up With It is the epicenter of  what many contemporary musicians sound like today from multiple genres.

You can get a nice vinyl copy of Get Up With It on eBay now for less than 30 bucks, one of the great things about collecting the electric music on vinyl is the price. Most electric period albums are had for between 15$ and $ 30 respectively.

There were a few mid 70’s Japan only releases that can get a bit pricy,  Dark Magus and Pangaea come to mind. These can run up to $100 for original mint pressings. Miles being so popular in his lifetime,  sold a lot of records, so these 70’s releases are still quite plentiful on vinyl.