I will not insult your intelligence by saying the 1980’s music from Miles Davis is as good or even close to being as groundbreaking as the earlier time periods of his music.  I can say however, the music is unfairly maligned, and certainly should not be treated as an afterthought. 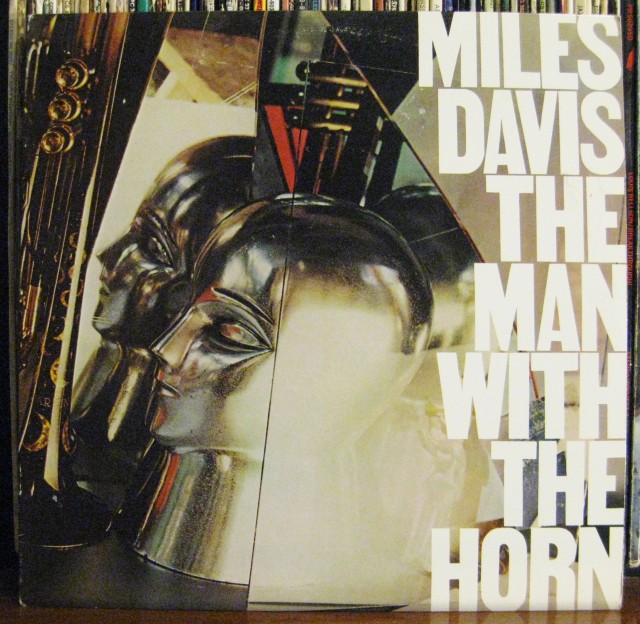 At the end of 1980 Miles arose from a 5 year personal and professional oblivion, to make a comeback that portrayed him as an elder statesman of jazz, even if the music he was playing then barely resembled jazz music.

Most people were just glad he survived the late 70’s, any music he could give us was a bonus. The first album The Man With the Horn was a little shaky, but as the decade went on Miles developed his final decade sound:

A particularly icy tone to my ears, a tone that was equally mysterious, and vulnerable, definitely different from his trumpet tone of the 70’s.

If you’re interested in reading more about Miles’ specific day-to-day life, I highly recommend 2 books that focus on Miles’ life in the 70’s and or the 80’s: Miles Beyond: The Electric Explorations of Miles Davis 1967-1991 from Author/Guitarist Paul Tingen.

The Last Miles, The Music of Miles Davis, 1980-1991 from author George Cole. Both Books dig deep into the electric years time periods. The Tingen book is indispensable in my opinion for a Davis fan trying to make sense of the electric period of the 70’s, as session and musician details are focused on as well as the personal story.

When I first started my journey with Miles Davis, I did not gravitate to the post 1980 music of Miles that’s for sure. My biggest complaint is the relative tameness,  some of it sounded very over produced. Of course by 1980’s pop music standards, it was in-line with what was going on at the time.

Other than Kind of Blue and Porgy & Bess, “the first 2 albums I heard from Miles, I found a home within the 68-75 music, Bitches Brew, Big Fun, Get Up With It,  Agharta, Dark Magus and the like. 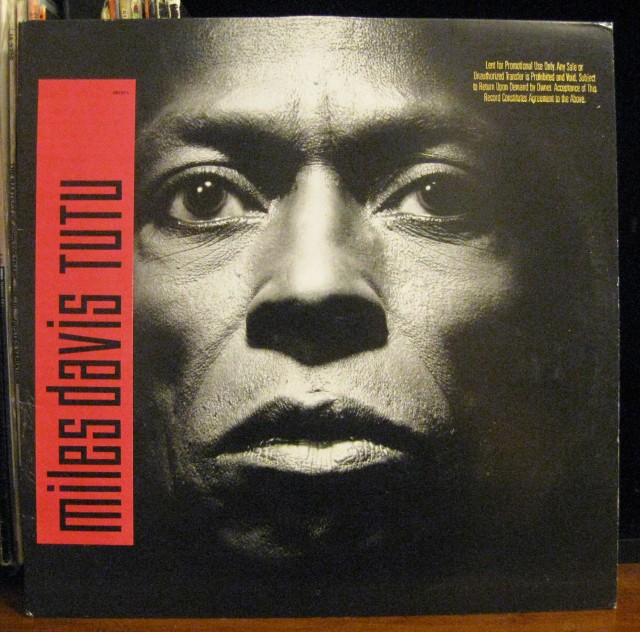 My first recollections upon hearing the 80’s music for the first time:

For one thing, the new wave sound is undeniable, that early to mid 80’s synth sound, icy cold and sinister?

The Music was not at all warm and inviting like the 50’s music, or progressively edgy as the late 60’s and 70’s music was.

I always felt the 80’s music was lacking something, the music seemed, dare I say “conformist”? Where was Dark Magus?

After 15 years of Miles listening under my belt, and a revisiting of the 80’s music, I think it is obvious that I underestimated this period of Miles’ music. The originality of it is quite high, the style and sound is pretty unique, if indeed easier to digest for mainstream audiences.

Miles trumpet is also unique, his sound at times is just evil sounding, I used the word sinister above for the icy synth sound, Miles doubles this sound on his horn. The more I hear the music and his playing it really is pretty solid.

It bares repeating, I am mainly considering the studio work of Miles around this time, if you have had a chance to hear the live document We Want Miles and any of the Montreux Concerts, things CAN open up a bit.

The music mostly hearkens back to the mid 70’s Cosey band style at times, but typically, things don’t go over board like on those 70’s shows… which not exactly what I want to hear. 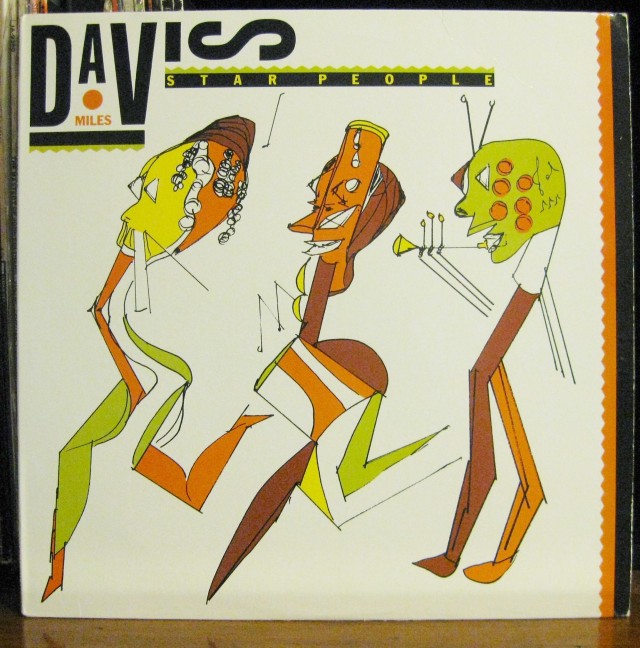 Miles carefully sculpted a sound though, that was both contemporary and original, yet still ALL him; all be it, him in a fusion Miles sort of way.

It is also interesting to note some of the outfits he wore, and how colorful they were, the style was more his own and less a Sly meets Hendrix wardrobe of the 70’s.

The 1980’s music is broken up into two periods, the Columbia years and the Warner Brothers years, though most of the music from both labels has a similar vibe.

Probably the best album during the entire decade was Aura: A musical suite that combined classical, progressive rock touches, new wave, bebop, funk, and rock to offer an album that is unlike most of his 80’s output.

In retrospect I think Aura is the one studio album from the 80’s that can be added to the rest of decades past great albums, to complete the cycle of Miles, an album Miles reportedly did not even want to make the album.

Producer Palle Mikkelborg plays the Gil Evans role here, and Miles gives him quite a bit of latitude.

Aura was released in 1989, 4 years after it was recorded by Columbia,  4 years after he went to Warner Brothers. I bet it irked Warner that 4 years after Miles joined their roster, the best album released during that period was a Columbia project? 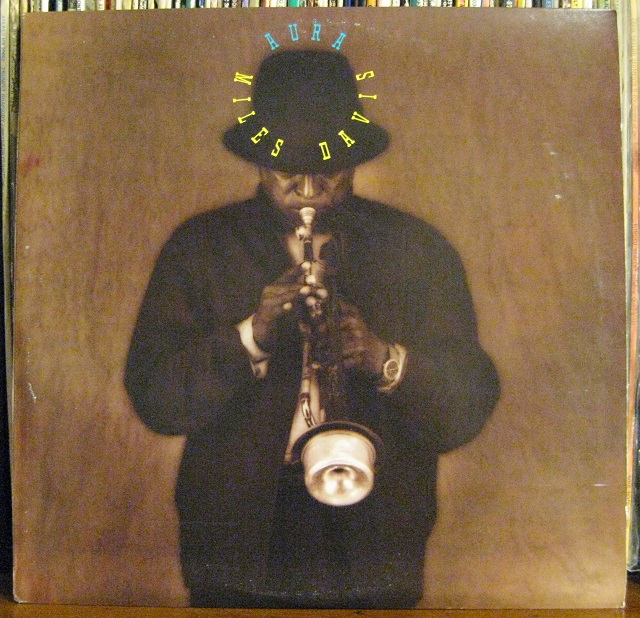 So what about the rest of the music? Well, albums like Star People, Decoy, Amandla, Tutu, and Doo Bop were all about that vibe of funk meets jazz, but believe me the sound is unique. I don’t remember hearing too much else that sounded exactly like these albums during the 80’s.

Possibly the most underrated album of the 80’s is the album Siesta: Basically a bassist Marcus Miller solo vehicle, Miller plays nearly every instrument on the album outside of the trumpet. Siesta was a soundtrack for an obscure film. The thing about it is it sounds influenced by arranger Gil Evans, in particular Sketches of Spain.

Miles plays some really familiar sounding trumpet on Siesta, he doesn’t have that icy tone I have noticed in 80’s, he sounds vulnerable and that familiar cracked tone is back, Siesta really is something to hear.

In my opinion Aura is the last masterpiece Miles Davis recorded, and probably the only real push the envelope piece of music after his 1975. Don’t get me wrong, I liked Star People, and the live document We Want Miles a bit, and all the 80’s stuff is worthy of listening to.

Aura is a different story, Sure it still has an 80’s vibe, I always thought there was a New Wave rock vibe on Aura, the Icy cold production adds to this as well.

Palle Mikkelborg Produced and arranged this music, to be quite honest, from things I have read about these sessions, I am not sure how much miles dug this music or even wanted to be at the sessions. Considering how he was at odds with Columbia Records during the Wynton Marsalis feud, but Miles reportedly needed the money, so he had to do it.

It turns out, Miles liked the album and experience, the music is quite good and unusual enough to hold ones interest. In fact, after maybe a dozen listens, I have no problem calling this Miles’s last great piece of music.

Why is Aura short-changed?

I think Aura may get the short end of the stick because Palle Mikkelborg composed the entirety of the music, and Those Miles Legacy protectors might be uncomfortable with Palle Mikkelborg being the man behind it, and getting so much credit for the music.

I suppose the best way to describe Aura is,  big band fusion jazz, maybe even third stream rock fusion. With the classical element that floats through the music, that third stream vibe is there.

It has such a strange sound that Columbia didn’t even release the music for 4 years, long after he had left for Warner Bothers, For me it sounds like an ECM record, the guitars and synthesizers are icy cold.

There are some busy African style drums that mix it up from time to time to still give you that “Miles funk” vibe. In some ways I can hear styles that harken back to Get Up With It, In particular the epic “He Loved Him Madly” with the shifting moods especially.

Miles himself plays wonderfully on Aura, lyrical as ever, and plenty of post bop mid 60’s style runs, and a few classic 70’s fusion quotes,

The production is also great, each instrument is well recorded with plenty of vibrance, the bright popping electric bass is up front in the mix.

All the tracks on Aura are named after what Palle Mikkelborg says were the colors of Miles’ Aura, that may be a little to deep for my Country Fried steak and Biscuits and gravy mind, but I do like the way the music comes together. Over the years it has really grown on me.

When I listen to this music with headphones, many shades of blue and green come in to my mind’s eye, I also see those colors with Kind of Blue and In a Silent Way for what that’s worth?

All in all I have really grown to love this album, I think it has to do with my Progressive rock fondness, and admiration of some European Players like Terje Rypdal and Jan Garbarek.

Aura reminds of that ECM style and production very much, I am glad Miles decided to allow the flattery of Palle Mikkelborg’s suite for Aura, it is a completely unexpected masterpiece within the Miles Davis Discography.

If you’re new to Miles and really were looking for a few from the 80’s, I would start with Aura, then I would head over to We Want Miles, Star People, and Decoy, from the Columbia stuff.

Then I would get the Warner Bros. albums Siesta, Amandla, and, Tutu. Miles last studio album was Doo-Bop, a heavily influenced by hip hop album, that has grown on me a little, even if the rapper on the album “Easy Mo Bee” sounds a bit dated. The non vocal tracks I actually don’t mind. 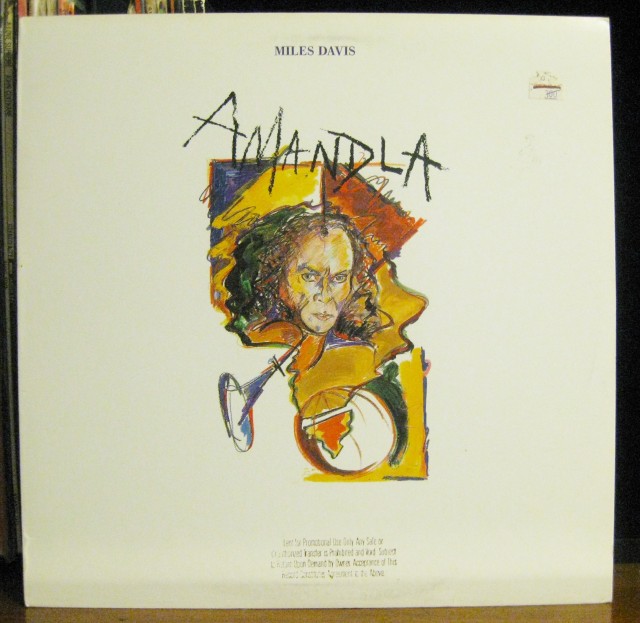 I think it might be a good idea to separate the 80’s Miles from the rest of his music, and not judge it against Kind of Blue, perhaps consider it a world-weary man easing into his sunset?

It’s music that is very good, with a unique sound and style that says: “Yeah it’s the 80’s, and I am Miles Davis, I deserve this?

Also if you are vinyl collector like me, Miles Davis happens to still be very affordable to collect. Miles was so popular that much of his early records, especially the 60’s, and 70’s, stuff were big sellers, and quite plentiful.

You can easily get a clean 1959 copy of Kind of Blue for less than $50.00 if you look around. Only rarer deep groove Prestige, and Blue Note vinyl seem to be out of control price wise.  The vintage Japan only releases like Dark Magus and Black Beauty are pricy, I paid nearly $60.00 each for my copies several years ago.

You can get most of these 80’s titles for less than $10.00, only the late 80’s releases, like Aura and Doo Bop seem to be rising pretty fast, as the late 80’s were the end of the LP era, and probably as many CD’s were pressed as records, making the vinyl fairly hard to come by.

*All photos are my own from my own LP collection*