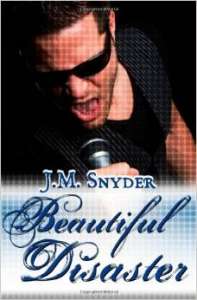 Beautiful Disaster by JM Snyder. Available from Amazon in both paperback and Kindle formats.

Corey and Ian are the members of 2ICE (pronounced “Twice”), the hottest pop-duo on the charts. Girls are throwing themselves at Corey and Ian’s feet every night after their concerts, and Corey seems to think nothing of taking them to bed for mindless, meaningless thrills. Ian has no taste for groupies, however—the one he really wants is Corey. But does Corey feel the same way, beneath all of his womanizing, and how can Ian trust his feelings could ever be real?

Okay, I honestly hadn’t been planning on reading so much gay romance/fiction, one book after the other lately. But this title  just happened to be in my suitcase after picking it up with the first book I read by author J. M. Snyder and I needed something new to start on. I was hoping I would like it better than the first book by the author I’d read, Rockstar. In honesty I liked this title even less.

There was nothing that drew me in to either Corey or Ian or made me care about their relationship’s   development. Part of it is I feel like we (the readers) are dropped into their story with absolutely no background information on who they are, where they came from, and if they are really passionate about music at all. In fact music and their careers are barely ever mentioned, except in talking about going from one concert to the next and dealing with their management. Corey and Ian can’t even be bothered to learn the names of their backing musicians! We know nothing about how they came together as a singing duo beyond it being mentioned that they’d won some kind of singing contest…honestly I felt both were complete cyphers of characters. Yes, Corey pouts and acts like a ten year old child; Ian is moody and drinks a lot. That’s really all I got out of their personalities and I didn’t care how “beautiful” they might be described by the author – I felt no attraction to either of them and less so to them as a couple.

It doesn’t help that the plot—such as it is—is basically a drawn out slash-fic cliché of two supposedly/previously straight characters angsting on and on about how they can’t reveal how much they really are in love with each other. Only here, unlike much similar slash fic, that reveal comes along less than halfway through the story; the rest of the book is a convoluted back-and-forth between them as first Ian won’t make love to Corey until he’s sure Corey really isn’t just using him. Then Corey won’t make love to Ian when Ian’s drunk. Never mind that they’re sharing the same bed night after night and cuddling and doing everything short of having sex—a plot device that made me roll my eyes (like ANY 20 year old boy would protest so much about engaging in “the act” on some great noble cause! I had a similar plotting issue in the recently read American Love Songs.)

Honestly this book kind of made me angry, I found it so annoying and tedious. I only finished it out of a sense of obligation to see it through to the end. I have friends who have sent me recs for some good gay romances which I will have to give a try later…for right now I think I want to switch to some Italy/travel related fiction and leave the romance and erotica behind for a while.