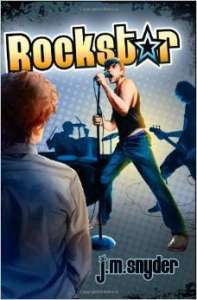 Rockstar by J. M. Snyder. Available in paperback and Kindle formats via Amazon.

Adam Blue is a rockstar – or at least, he’s sure he’s destined to become one as soon as he can get a record company to pick up his band, Viral Blue. Their chance for success comes when the band lands a gig at a hot local club, and catches the ear of Paolo Raucci of Raucci Entertainment. Paolo likes their sound, and perhaps more than that is immediately attracted to Adam. The feeling is quite mutual. But will Adam’s ego – and his blossoming relationship with Paolo – tear his band apart before they can finish their first demo recordings?

I had high hopes for enjoying this story, as I’m typically a fan of fiction about rock musicians, and I do like good gay romance and erotica. I even like characters who are sometimes seen as unlikeable, maybe even a jerk. But I just couldn’t get past how incredibly obnoxious a main character Adam was. He’s not just confident about his talents, he’s arrogant. He routinely treats his band mates, Trace and Mike, as little more than session players there to back him up, ignoring their opinions about their music. He routinely makes decisions about the band and their music without their consultation or even outright going against what they want to do.  I certainly can’t see that being a recipe for long-term success with their band.

But even worse, Adam comes across a gross misogynist on top of everything else, constantly belittling Viral Blue’s one groupie and referring to her and the manager of the local club where they play as a “sl-t” and “-itch” every time their names are mentioned. Some of the other characters do this as well, which made me uncomfortable about the author’s perspective on women and not just her characters’ point-of-view. I know that the m/m romance genre isn’t necessarily where one goes to read well-developed female characters, but I really dislike it when such books take such a negative viewpoint toward any women who might be present in the story.

Adam is just a nasty piece of work, through and through, despite how the author tries to describe him as attractive and desirable. As such, when Paolo comes along and they immediately fall in lust, it was hard for me to really care about it or get wrapped up in their budding “romance”.

It’s a shame because the writing in Rockstar itself is pretty good technically, especially for a small press publication (I only caught two typos/editing errors). The supporting characters of Trace and Mike are fun and I just wish the book had been more about them and their relationships with Adam. In fact, a more interesting story for me would have been about Trace and Adam getting together while having to deal with their awful frontman and putting up with his ego.

There’s also not actually a lot of explicit content in the book, so if you’re looking for a super-steamy read, this book isn’t going to satisfy.

Overall I’d only give “Rockstar” a 2/5 rating and can’t say I’d recommend it highly to other readers of the gay romance genre desperate for fiction about young rockstars. The book was published in 2009 by JMS Books LLC.