Making the Most of Your Visit to Pompeii 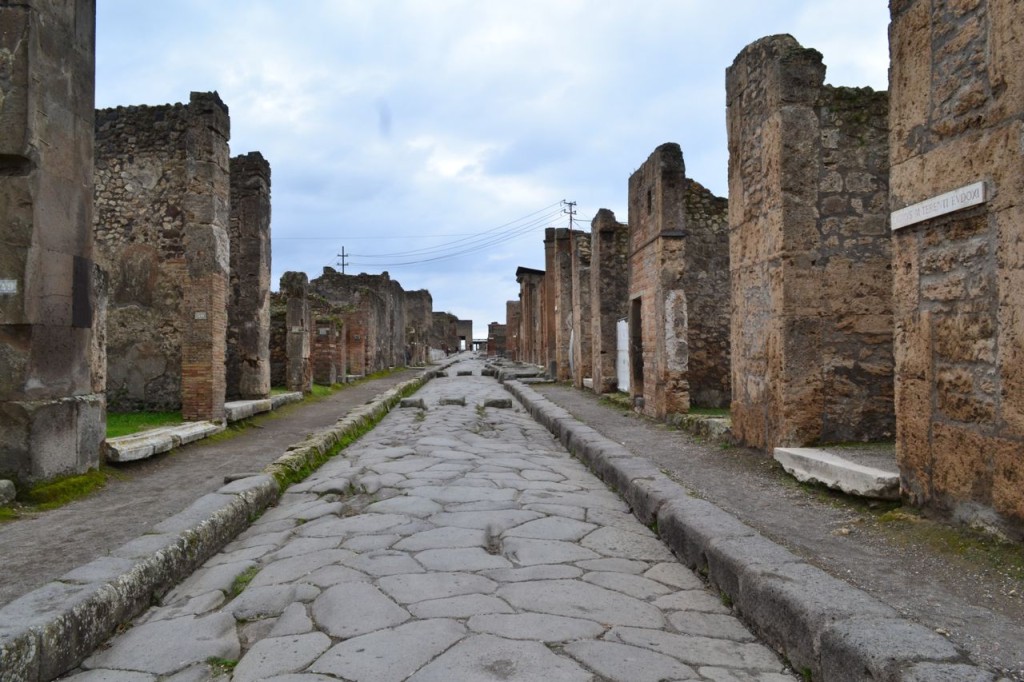 A street in Pompeii, January 2014. All photos on this page are by the author, sockii.

Pompeii is certainly one of the most well-known archeological sites open to visitors in the world. According to statistics, over 2.5 million people visit the ruins of Pompeii every year!

If you are fascinated by Roman history, this ancient city–destroyed and buried for centuries after the 79 AD eruption of Mount Vesuvius–is definitely a must-see destination. Pompeii is just a short trip from Naples, Italy and also easily reachable from Rome or further south along the Amalfi Coast. However, there is some practical information you should know before you go, if you want to get the most out of your visit.

Here I’ll cover the basic facts of Pompeii’s history and how to get there. I’ll also give my opinion on using a paid tour guide versus planning your own itinerary, how long you may need to see Pompeii properly, and other sites to consider when visiting this region of Italy.

Rick Steves on Pompeii: A quick video tour and introduction

A brief history of Pompeii 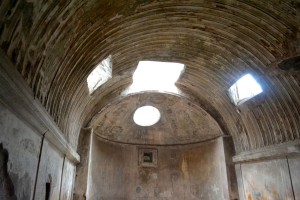 Inside a Pompeii bath house.

Researchers believe that Pompeii was founded in either the sixth or seventh century BC by the Osci, a people of central Italy. It was located at an important crossroads between other cities, and had been used as a safe port for sailors since ancient Greek times. Pompeii was captured and changed hands several times, including by the Etruscans and the Samnites, before finally becoming a Roman colony in the year 80 BC. Therefore the final 160 years of the city’s growth and existence heavily show the influence of Roman architecture, design and lifestyles.

It is believed that by 79 AD, Pompeii was home to some 20,000 inhabitants. Many Romans had their “holiday villas” in Pompeii and the city featured all of the amenities and luxuries to be excepted: baths, a gymnasium, theaters, bakeries, food shops and yes, quite a few brothels. Earthquakes had been a frequent problem to the city, but no one expected the devastation that would occur that year when Mount Vesuvius erupted out of its long dormancy. Ash rained down upon Pompeii for six hours, burying the entire town up to 25 meters deep; it was long believed that the city’s inhabitants died of ash suffocation but more recent evidence suggests that intense heat surges may have been enough to cause instant death.

Pompeii remained abandoned, buried and forgotten for centuries. It was only in 1599 that walls and frescoes were first unearthed while attempting to build an underground channel. However, the findings were reburied quickly (due likely to the sexually-charged content found in much artwork from Pompeii) and proper excavations of the site, as well as of nearby Herculaneum, did not begin until the 18th century.

Since then Pompeii has been a popular destination for tourists, although all those visitors every year have caused their own problems in preserving the ruins. Most of the archeological work today is focused on preserving and restoring the excavated ruins instead of continuing to explore areas still buried underground. 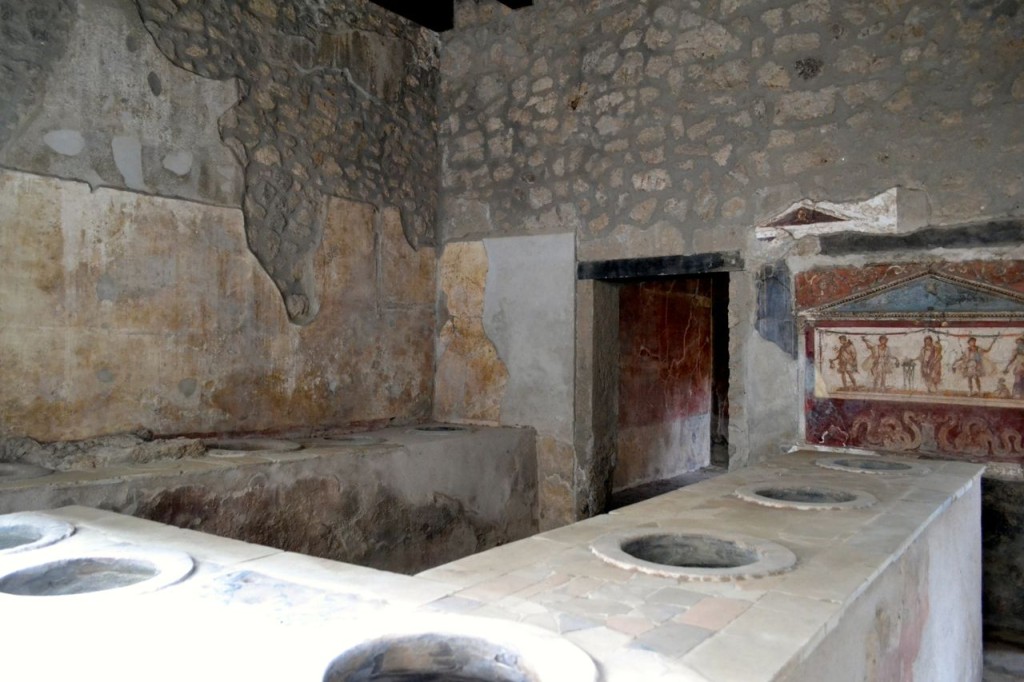 The ruins of a Pompeii “fast food” restaurant or Thermopolium.

Opening hours: April through October Pompeii is open daily from 8:30am until 7:30pm; November through March the hours are 8:30am – 5pm, and year-round last entry is 90 minutes before closing time.

Here you can see a stepping stone on a one-way street – and also the grooves left by frequent chariot traffic!

Getting to Pompeii: Transportation options 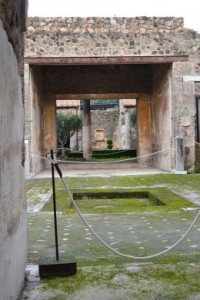 Enjoy exploring Pompeii – but respect the ropes and barricades that keep you out of areas under active preservation.

From either Naples or Sorrento, the easiest way to get to Pompeii is to take the Circumvesuviana train. Tickets are cheap (only a few Euros each way), and from Naples it takes just a little bit over 40 minutes to get there; get off at the Pompeii Scavi Villa Misteri stop. It’s really more subway than comfortable railroad, and you will likely have to put up with some beggars carrying their babies for sympathy or playing accordions; just ignore them as all of the locals do. From the Circumvesuviana station it is a very, very short walk to the main entrance of the Pompeii archeological site, Porta Marina.

When you get off the train, ignore the first booth promising guided tours and “tickets” – that’s NOT the main entrance to the site! This is where unofficial guides hangout trying to get customers for a tour of the site, if they can get enough other interested parties together who understand/speak your language. If you want to use a guide, that is your choice; some of them are very knowledgeable and can help explain what you’ll see in Pompeii. But they will likely only take you around to the main highlights of the site and you’ll want to find one you are comfortable with.

Audioguides are available at the main ticket booth/entry. Be sure to ask for the free, detailed map of the site that is available at the gate as well; they won’t give it to you by default but it is excellent if you plan on really getting “lost” in the ruins and want to know what you are seeing. 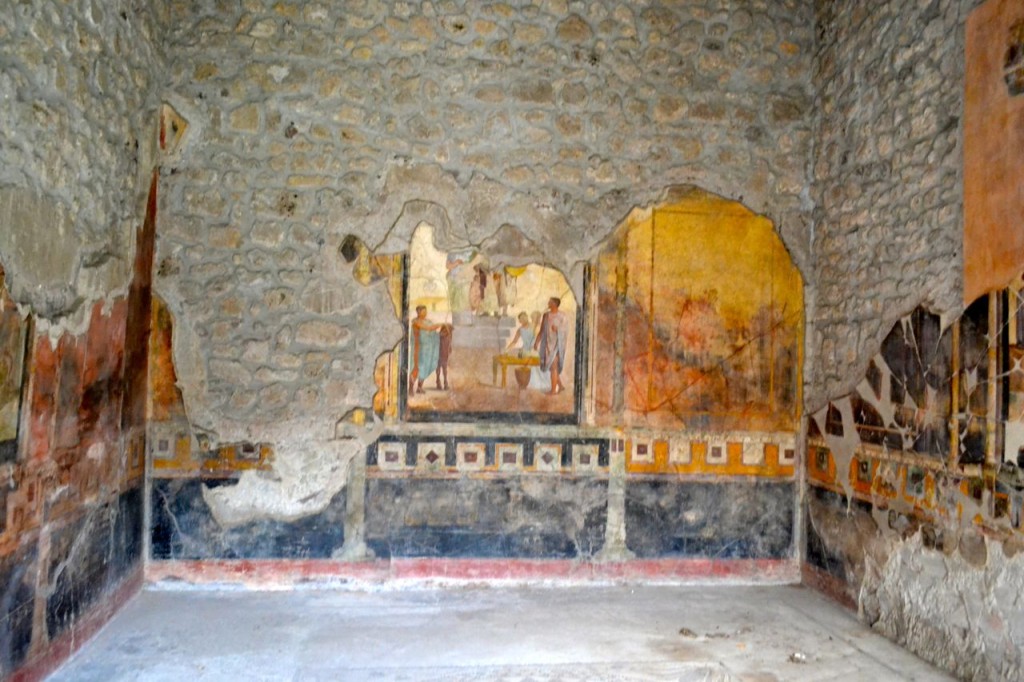 Wall paintings in a Pompeii villa. Many of the best artifacts and artworks from Pompeii are actually on view in the Museo Archeologico Nazionale di Napoli.

If you choose to explore on your own, I recommend using Rick Steves‘ self-guided tour of Pompeii as a starting point. You can find it in his guide to Naples and the Amalfi Coast linked below:

Where to learn more and finish planning your visit 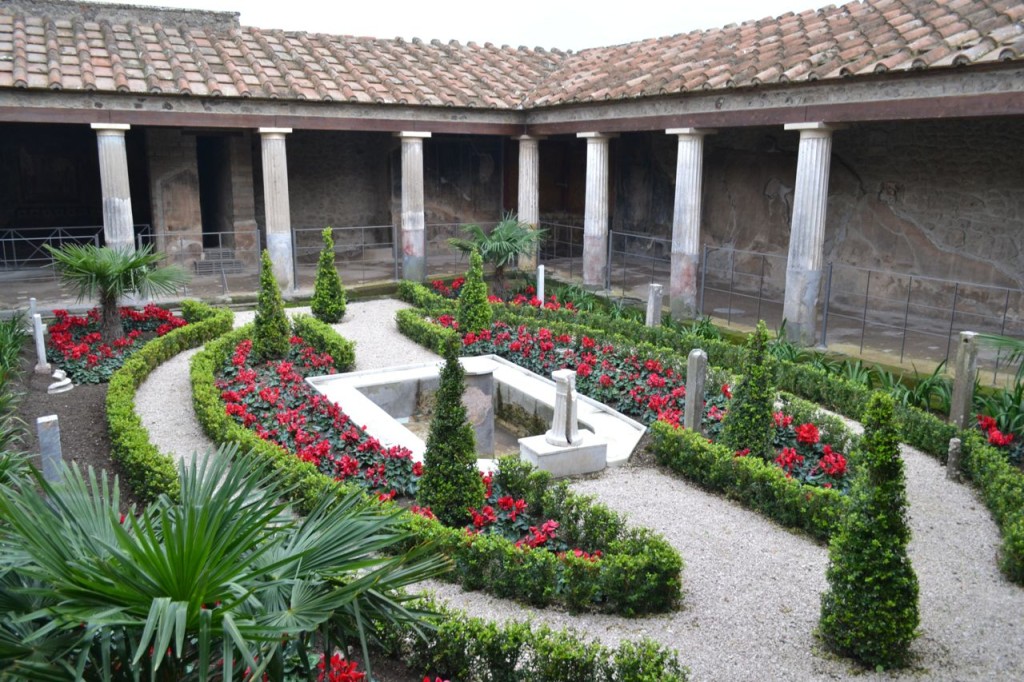 You may find gardens planted to recreate how they might have looked in 79 AD before the eruption of Vesuvius.

Learn more about Pompeii and its history:

CHECK PRICEPompeii (The Roman World)
A great introductory book for middle school-aged children interested in the history of Pompeii. Full of color illustrations that show what the ruined buildings and temples actually looked like.    CHECK PRICEThe Complete Pompeii
This is a comprehensive and lushly illustrated guide to Pompeii that earns its title as the “Complete” reference to the city.