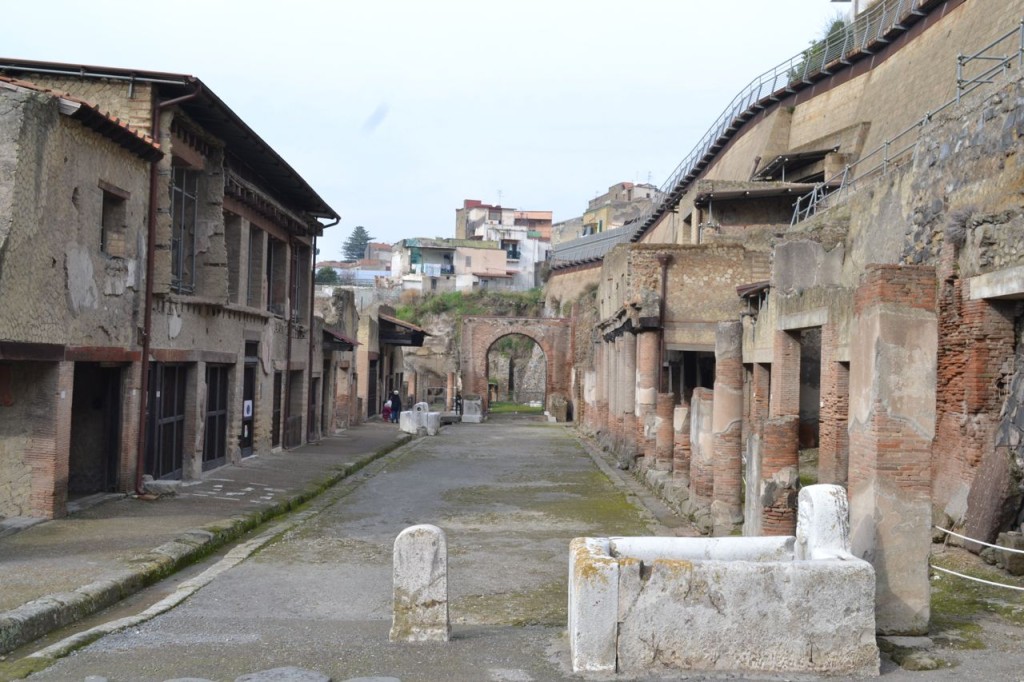 A street you can walk along when you visit the ruins of Herculaneum. All photos on this page are by the author, sockii.

Herculaneum: Another Ancient Roman Town Lost to Vesuvius in 79 AD

Most of us are familiar with the story of Pompeii, the ancient Roman city which was destroyed in the 79 AD volcanic eruption of Mount Vesuvius. However, Pompeii was not the only city lost to Vesuvius in that volcanic blast; the town of Herculaneum was also buried under ash and forgotten until excavations began in the 18th century. 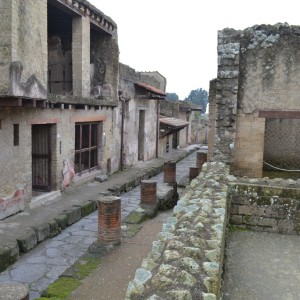 Herculaneum presents a different and unique find for historians and archeologists, as compared to Pompeii. The town is actually better preserved due to the way the volcanic blast hit, burying it under approximately 20 meters of ash. Unlike Pompeii, the second stories of buildings did not collapse; frescoes and tile work inside buildings remain more intact; organic material including wooden beams, boats and even loaves of bread were carbonized and preserved. However, only a small portion of the site has been excavated due to numerous factors, including difficulties maintaining the structures once exposed to the elements. The fact that the modern city of Ercolano sits on top of the rest of the ancient ruins also presents difficulties, both for residents of the town and historians alike.

Today, visitors to the Campania region of Italy can see and visit the ruins of Herculaneum themselves to get a fascinating glimpse of Roman life in 79 AD. The visit is awe-inspiring and well worth it, not just for the uniqueness of the site but that it is generally less crowded and overrun by tourists as compared to Pompeii. On this page you will find further information on how to get to Herculaneum and what not to miss when at the site. 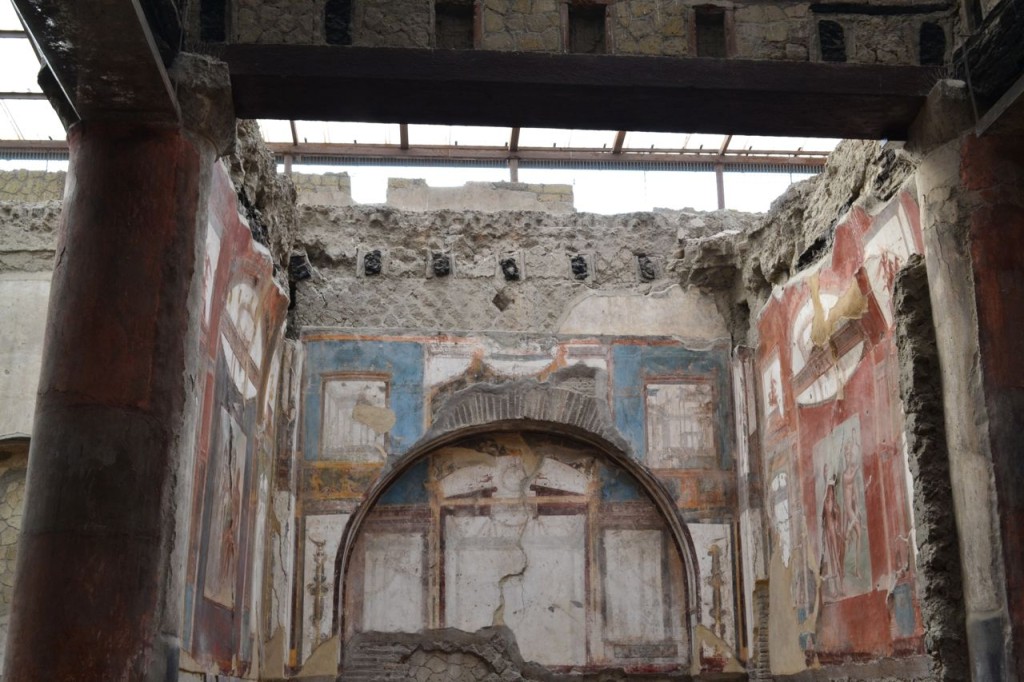 Inside the College of the Augustales in Herculaneum.

The History of Herculaneum

It is believed that the origins of Herculaneum date back to the 6th century BC, when it was likely settled by the Italian Samnite tribes. Soon after, however, the town came under Greek control and it became an important trading post, thanks to its prime location near the Gulf of Naples. The Greeks named the city Heraklionin honor of the legendary hero Hercules.

In the 4th century BC the city again came under Samnite control, until the Romans claimed it in 89 BC. Despite its small size, Herculaneum was in fact a wealthier town than Pompeii, with a high concentration of elaborate homes and villas. The largest and most important was the Villa of the Papyri, which stretched for 250 meters along what was then the coastline of the Gulf.

Today, two modern towns (Ercolano – formerly called Resina – and Portici) lie over much of the still-buried ancient city, of which 75% remains un-excavated. Currently most efforts are focused on preserving the open site, and we may never know for sure what still remains hidden underground…

This is the original shoreline of Herculaneum. The archways to the left are where skeletal remains of 300 were found, hoping to escape death.

The Eruption of Vesuvius

We know based on ancient letters that the eruption of Mount Vesuvius occurred on August 24, 79 AD. The volcano had been dormant for so many centuries it was not even recognized as a volcano any longer. The eruption began about 1pm, spewing ash and stone into the sky – blowing primarily in the direction of Pompeii and leaving Herculaneum largely unscathed save a few centimeters of ash on the ground. However, many residents of the city quickly fled, fearing that the worst was yet to come.

And they were correct – at 1am that evening, the first pryoclastic surge of hot ash and gases hit the city at a speed of 100 miles per hour and a temperature of 500°C, instantly killing those who had remained behind. Several hundred skeletons were discovered in 1981 under arches along the ancient shoreline, where those who’d stayed tried to seek shelter. Six flows and surges of volcanic ash followed, completely burying the town from the ground up in a way that kept it largely intact – even airtight for over 1,700 years until the first excavations began. 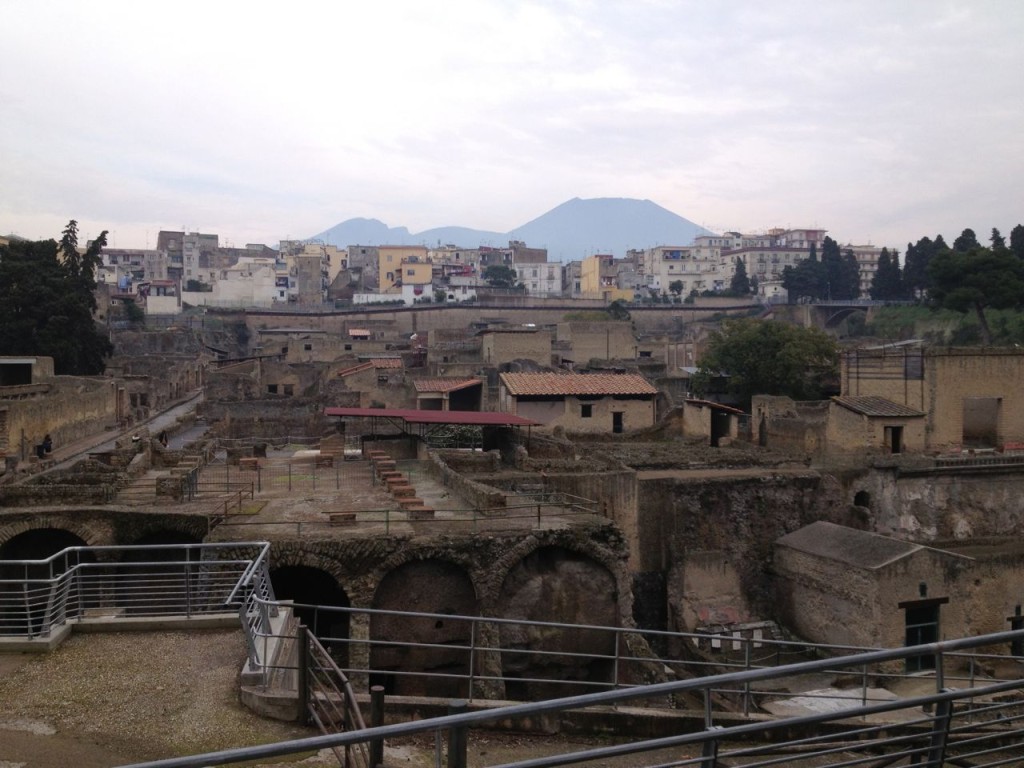 Herculaneum – with modern Ercolano and Vesuvius in the background

The archeological site of Herculaneum is open daily from 8:30am until 7:30pm April – October, and from 8:30am until 5pm November – March. Last entrance is 90 minutes before closing time. There is an admission fee of currently 11 Euros, or you can get a combined 3-day ticket for 20 Euros that includes the archeological sites at Herculaneum, Pompeii, Oplontis, Stabiae, and Boscoreale. The Campania ArteCard also gives users discounted admission or includes admission depending on which type of card you buy; visit their website for more details.

Getting to Herculaneum is easy if you are staying in either Naples or Sorrento: the Circumvesuviana train line runs frequently between these two cities with a stop at the modern town of Ercolano. Naples to Ercolano only takes about 20 minutes, and it’s the same train line that goes on to stop at Pompeii. Once at the train station, it’s a short walk down hill, about 8 blocks, to the entry of the archeological site (no need to take the “Shuttle Bus” that may be trying to get your Euros for the very short distance). You can also hire a taxi to drive you there if you don’t mind spending the money, or if you are driving take the A3 and look for the Scavi di Ercolano signs.

Plan on spending at least 2-3 hours exploring the ruins, or longer depending on your enthusiasm for archeology and seeing everything possible. It is theoretically possible to visit both Pompeii and Herculaneum in one day, but it might be difficult to see all of the interesting sites and ruins doing that. Instead I suggest spending one day at Pompeii, then one day visiting both Herculaneum and the National Archeological Museum of Naples, where many of the mosaics, frescoes and other items retrieved from both sites are now housed.

For your visit, be sure to wear comfortable shoes good for walking on uneven pavement. Bring a hat and sunscreen for hot summer days, and if possible leave the backpack at home; many structures and wall paintings have suffered wear and damage from being brushed against by backs and clothing through the years. Please respect the site for the unique treasure it is and leave it as you have found it.

Need something to eat or drink after visiting Herculaneum? You will find many cafes and pizzerias between the Ercolano train station and the archeological site for a simple, inexpensive meal. There are also several hotels and b&bs in the area, if you are traveling through and wish to spend the night. 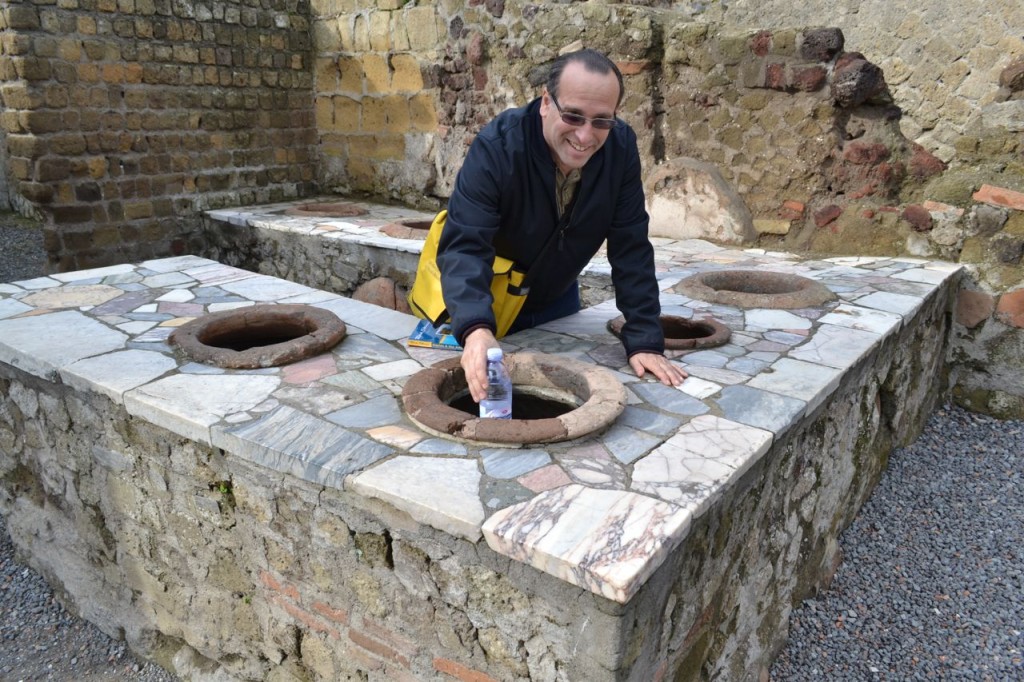 What was once a “restaurant” in Herculaneum – most Ancient Romans enjoyed eating midday meals in public gathering spaces. 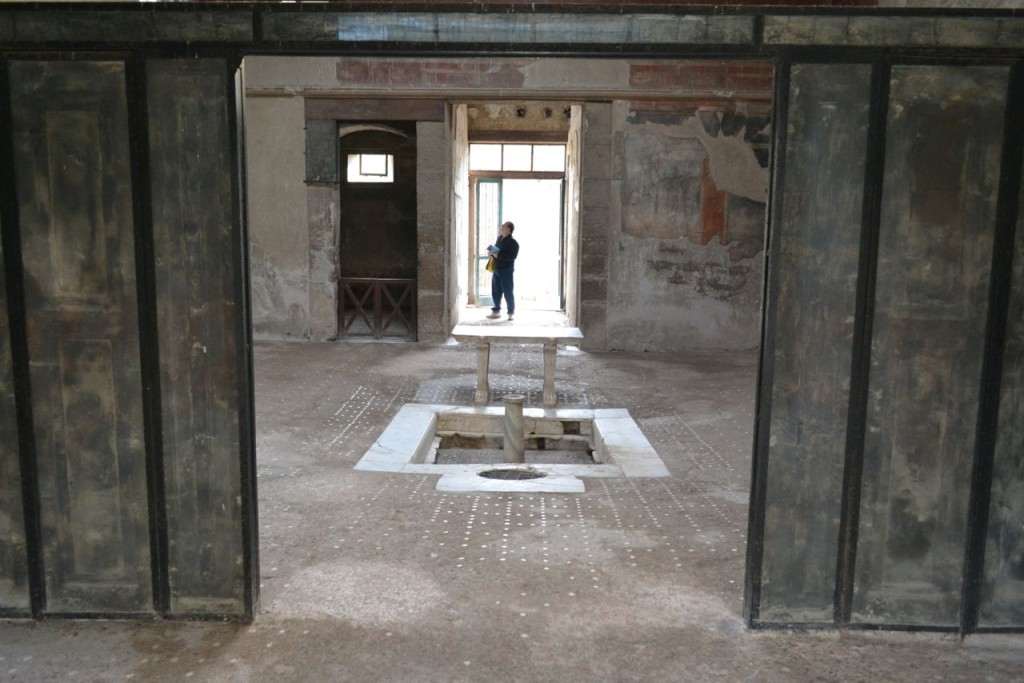 The unique set of “sliding doors” found inside a Herculaneum villa. 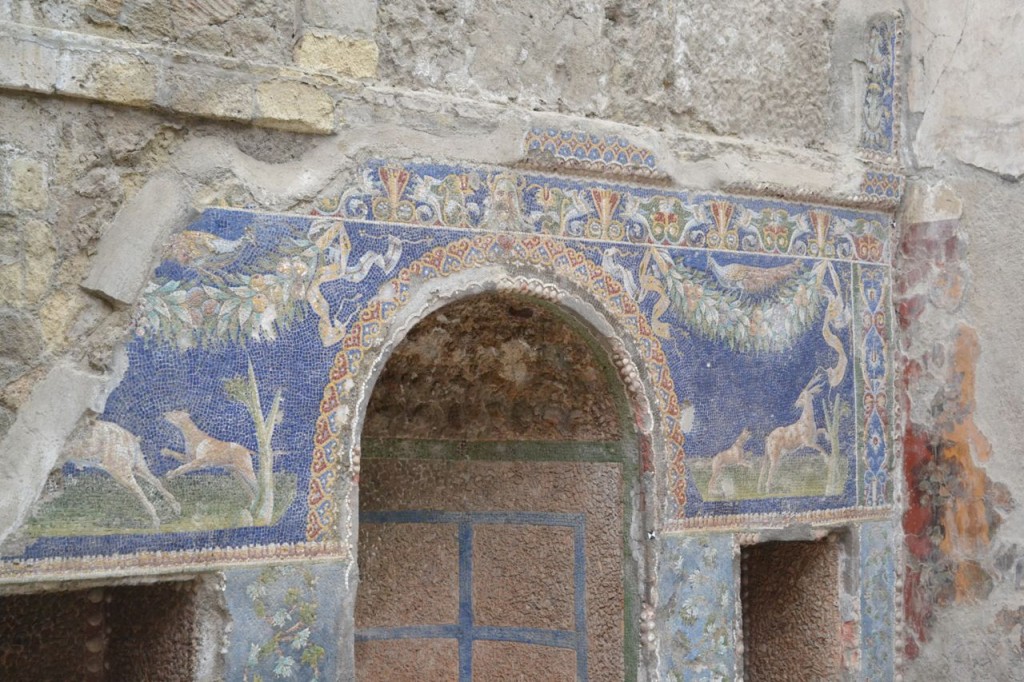 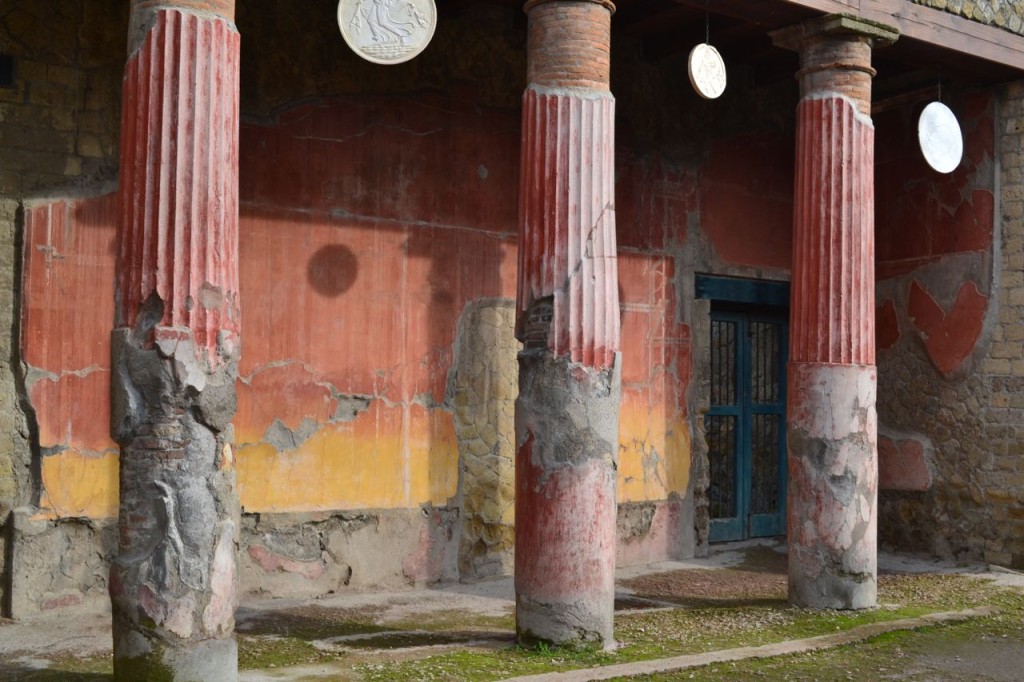 Colorful columns and frescos in Herculaneum

Books to Learn More about Herculaneum

CHECK PRICEHerculaneum: Italy’s Buried Treasure
This book explores the discovery and excavation efforts at Herculaneum, as well as giving great detail on what life was like in the town for an ancient Roman citizen. Filled with rich detail, photographs and exciting text, it will definitely be a great read for any enthusiast about Roman history and archeology.    CHECK PRICEHerculaneum: Art of a Buried City
Filled with lush illustrations and photography, this book examines the beautiful wall paintings and decorative arts found in the villas of Herculaneum.    CHECK PRICEThe Library of the Villa dei Papiri at Herculaneum
Discovered at the Villa dei Papyri in Herculaneum was one of the most incredible finds ever from the classical world: a library of over 1,000 papyrus scrolls. But could there be any way for their contents to be recovered? Learn more about the attempts to preserve and uncover the texts on these scrolls and what they have told us about literacy and writing in Greek and Roman times.    CHECK PRICEGuide with Reconstructions Pompeii – Herculaneum Past and Present With Reconstructions of the Ancient Monuments
This colorful illustrated book will help any visitor to either/both Pompeii and Herculaneum understand what the towns really were like in 79 AD — before Vesuvius destroyed them. Overlays illustrate temples, villas, and small shops reconstructed, to help understand daily life in ancient Roman cities.