The quotable Miles Davis: The 9 selected quotes below do indeed capture the essence of the street wise and equally brilliant mind of Miles Davis. 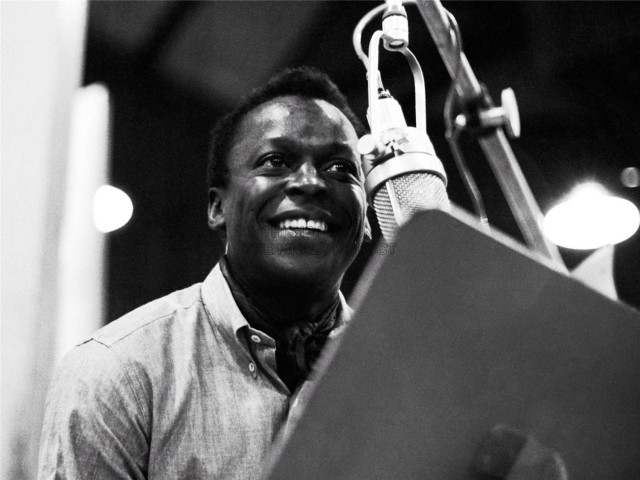 Some of Miles’ quotes cut to the core, like a skilled surgeon performing an appendectomy. Many of his quotes are pearls of wisdom, especially in a musical context, those are usually simple and profound.

Some of the quotes are biting, and display what Miles’ street wise view of the world was; they were often times hilarious, and almost never politically correct.

Certainly Miles had a dark sense of humor too, but he also knew how to read people, especially his band members over the years.

Miles would have made a good baseball manager, he knew when to put his arm around a musician, and when to kick him in the ass. He also knew which guys to leave alone.

“Good music is good, no matter what kind of music it is”

“When you’re creating your own shit man, even the sky ain’t the limit”

“My ego only needs a good rhythm section”

Paul Tingen’s Miles Beyond has the honor of being the best jazz book I have ever owned, this book is indispensable with its in-depth commentary, particularly the information on the electric period of 1969-1991.

“Tingen goes in depth, not only about each session during Miles’ Electric period, but also his life in detail during the time period, warts and all”.

He touches on inter personal relationships with other band mates, both good and bad. Miles was all over the map personally during this phase of his life, his music sounds this way too; always on the move reaching forward and never looking back.

Miles Beyond also doubles as a quick electric period reference book for all the electric period sessions, all the way until Miles’ death in 1991 at the age of 65. If you are a Miles fan, you must own this book.

“If they act too hip, you know they can’t play shit.”

“A legend is an old man with a cane, known for what he used to do, I’m still doing it”

Many people not as familiar with the legacy of Miles Davis, probably would not know that Miles was actually a very funny man.

By all accounts from band mates, other musicians, and other entertainers, Miles had a knack for the perfectly timed joke, just like his perfectly timed minimalist trumpet playing.

Miles was not a big fan of the rock n roller Steve Miller:

Miles was in rare form describing how he, Miles Davis, had to open up for this non playin’ mother f#ck%r Steve Miller, just because he has a couple of sorry ass records out.

Miles opined how he showed up late on purpose, so Miller had to go on first. Miles was just matter of fact telling a story, he probably wasn’t even trying to be funny. I am not a particular fan of Steve Miller either, but non playin mf”r seems a bit harsh? Well, next to Miles, that sounds about right to me. I guess Miles wasn’t a midnight toker playing his music in the sun?

Miles was not a big fan of alto sax/flutist Eric Dolphy:

During a Downbeat Magazine Blind Fold Test, Miles put down the avant-garde alto sax whiz. Miles early on did not seem to dig atonal sounds at all. It is ironic too, considering the type of music Miles would be playing less than 10 years later.

On June 18′ 1964 After being played a Dolphy composition “Mary Ann” Miles responds: “Thats got to be Eric Dolphy, no body else could sound that bad! The next time I see him I am going to step on his foot, you can print that. I think he’s ridiculous. He’s a sad mutha f…

“Knowledge is freedom, and ignorance is slavery”

“I’ve changed music 4 or 5 times, what have you done of any importance, other than being white?”

Note: Reportedly the final quote was given to a rich white lady who didn’t know who Miles was, when he was asked what he had done to be honored at the White House.

Photo: used with permission via Amazon.com