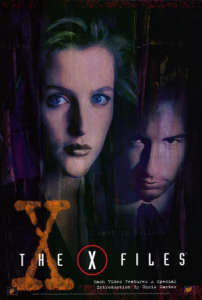 The X-Files starring Gillian Anderson and David Duchovny. Buy this image at AllPosters.com.

Today, genre television (that is, programming that is science fiction, fantasy or horror-themed) is seeing a significant upsurge in popularity. There are well-liked cable and network series such as The Walking Dead, Game of Thrones, Hannibal, Sleepy Hollow, American Horror Story and Marvel‘s Agents of SHIELD that have all gathered large fannish followings and led some to declare this most definitively to be the era or Year of Genre TV.

Maybe it’s just my advancing age (that’s right, I’m a cranky fannish dinosaur), but I disagree. For me, the 1990s will always be the greatest era of genre television. The ’90s produced many of my all-time favorite science fiction, fantasy and paranormal-themed television shows, series I can still remember or re-watch fondly many years later. Perhaps it was simply a matter of timing; I got my own apartment and my own TV (with cable!) for the first time in 1994 when entering graduate school, and I spent much of the rest of that decade enjoying television and tv fandom in my “downtime” to relax and escape in between classes and research work. The SciFi (now Syfy) channel launched in 1992 as well, and kept the airwaves filled with classic and new genre programming.

Just take a look back at the many genre series of the decade, and decide for yourself in which era genre tv has truly thrived.

Many of the 90s genre series I loved were syndicated TV programs—as that’s where such shows could come into their own and have the time to develop loyal followings. In the late 80s, the major networks largely had moved away from hour-long dramas, especially genre/action shows, because they were too expensive to produce as compared to half-hour sitcoms. One of the first big syndicated genre successes that started in the late 80s and carried over into the 90s was Star Trek: The Next Generation. While I was in college between ’90-’94 (at an engineering school, mind you), that was the only TV show many of us students had an “appointment” to watch on one of the few dorm lobby television sets. The next Trek series, Deep Space Nine, would also air in syndication from ’93-’99, and carried on with the series’ universe, philosophies, and emphasis on thoughtful science fiction that explored many moral, ethical and religious themes. 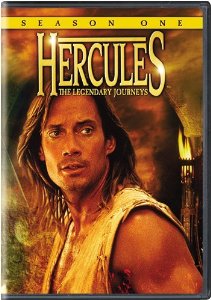 But Trek was just one franchise that took hold on syndicated tv in the 90s. There was also Hercules: The Legendary Journeys (’95-’99), a fantastical (and often quite funny) sword-and-sorcery show that played fast and loose with mythological legends. The show led to an even more popular spin-off series, Xena: Warrior Princess (’95-’01) and a less successful young adult-aimed show Young Hercules (’98-’99). I watched (and religiously video taped to re-watch) all of them, although Xena was my favorite of the three, at least until its later seasons. The beautiful New Zealand scenery was as easy on the eyes as the hunky, gorgeous cast members!

There were many other syndicated genre successes of the 90s, and a few failures or short-lived shows that perhaps deserved better. Forever Knight (’92-’96) was a wonderful show that combined vampire mythology with a police procedural. Earth: Final Conflict (’97-’02) was a thoughtful science fiction series based on an original concept by Trek‘s Gene Roddenberry, looking at first contact between humans and an arriving alien species that promises technological advances for refuge—but who might not be as they seem. Highlander ran for 6 seasons (’92-’98), spinning off from the successful theatrical movie of the same name, and following the battles of immortal warriors around the world who fight to be the last standing “winner” of The Game. My favorite syndicated science fiction show of the decade was J. Michael Straczynski’s Babylon 5, an epic space opera with a complex continuing storyline that played out over 5 seasons from ’94-’98. 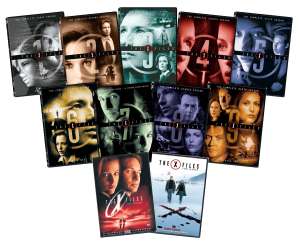 The X-Files complete series on DVD. Buy it now on Amazon.

Genre television and the major networks in the 90s

Network television didn’t entirely give up on genre television in the 90s, although they didn’t always give such shows a lot of time to succeed and take off. One notable exception was FOX’s The X-Files, perhaps the great genre show of the decade. Running from 1993-2002, the show took on creepy paranormal themes from alien invasion to “monsters-of-the-week”, with continuing government conspiracy themes throughout. While the show’s mythology sometimes became too complicated and muddled for its own good, leads Gillian Anderson and David Duchovny as Scully and Mulder always captivated fans; the show had perhaps one of the largest fandoms of the decade with countless fanzines produced, fan-fiction archives and websites online, and conventions. The show also led to two spin-off/related series, Millenium and The Lone Gunmen.

FOX wasn’t always so kind to its genre shows during the 90s, however. Many of them which they tried to pair with The X-Files on Friday nights, or aired in other poor time slots, died an (unfairly) early death: The Adventures of Brisco County, Jr, Strange Luck, VR.5, and my especially beloved Brimstone, just to name a few. 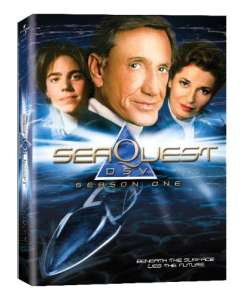 seaQuest DSV on DVD. Buy it now on Amazon.

NBC tried to take on the science fiction market with an underwater twist with seaQuest (’93-’96). This high-budget series, set in the “near future”, proposed an Earth stripped of its natural resources save those remaining on the ocean floor. So instead of exploring outward into space, Earth’s nations set out to colonize and mine the world’s great oceans. It was a series plagued with many problems throughout its three seasons, but it did have a small but loyal fan following mostly due to several popular actors in the cast (namely the late Jonathan Brandis).

ABC started off the 90s with what would become one of the greatest cult genre tv shows of all time: the short-lived Twin Peaks. From the creative mind of David Lynch, this surreal series blending the supernatural with a psychological thriller left people buzzing over “Who killed Laura Palmer”. CBS, on the other hand, went for more feel-good fantasy dramas that appealed to their older viewership, such as Early Edition (’96-’00) and Touched by an Angel (’95-’03).

UPN and The WB

The ’90s also saw the launch of two new television networks, UPN and The WB. Both networks, first hitting the airwaves in 1995, filled their early schedules with numerous genre series—several of which would be quite successful. UPN’s series would include Star Trek: Voyager, the Bruce Greenwood conspiracy-thriller Nowhere Man, the science fiction western Legend, and the unique police procedural The Sentinel, featuring a character with exceptionally acute senses. The Sentinel might have only lasted for four seasons (’96-’99), but it spawned one of the most prolific and popular media fandoms of the 90s and one that continues with a certain level of devotion today.

The WB started out as primarily sitcom-oriented, but then expanded into the teen market in 1997 with Buffy: The Vampire Slayer, which would again be a breakout genre sensation that launched a huge fannish following and later the spin-off series Angel. Charmed, a wicca-themed supernatural series about three powerful sisters, would launch in ’98 and continue for 8 seasons.

And there were many more… 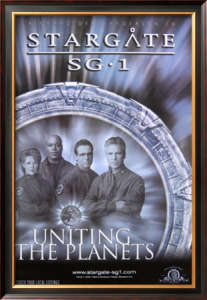 I’m sure I’ve left off someone’s favorite genre show from the 90s in this brief overview (certainly I can’t forget to mention Showtime’s Stargate SG-1, or Farscape which launched just at the end of the decade.) But I think I’ve brought up enough shows to make my point that the 90s were a great decade for fans of genre television, whether you liked vampires and creepy paranormal thrillers or epic space operas and futuristic worlds. Many of these shows combined humor, action, drama and romance in memorable ways with thoughtful writing and unforgettable characters.

Do the shows today have better production values and special effects? Without doubt. But with few exceptions they just don’t grab my attention the way these 90s genre classics did.

In fact, now I feel overdue for a re-watch of several of them!