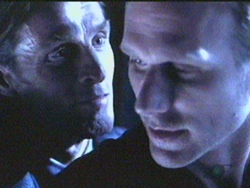 In the Fall of 1998, FOX premiered one of the most unique supernatural television series of all time (at least in this author’s opinion): Brimstone. The series starred Peter Horton (of Thirtysomething fame) and John Glover, who would later go on to portray Lex Luthor’s father Lionel in another popular but much longer-lived cult tv series, Smallville.

Sadly, Brimstone only aired for 13 episodes before cancellation. While many missed seeing the show during its initial run, those thirteen episodes were then picked up for reruns on the Sci Fi Channel where more discovered this thoughtful, intelligent and well-acted series. Despite numerous campaigns by fans, the show has never even been released on DVD or BluRay officially, which is a tremendous shame. Perhaps there is still hope for a future release if more people learn about the show and want to see it in better quality than YouTube videos and poorly duplicated copies.

Here I’ll present some basic information on the show, where to learn more, and what make Brimstone such a unique and wonderful show.

Image: Peter Horton and John Glover in Brimstone. All screencaptures on this page are by the author, sockii, and taken from her Official John Glover website.

An introduction to the show 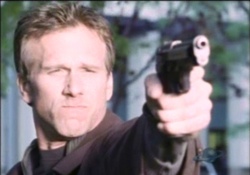 The year is 1983 and Ezekiel Stone (Peter Horton) is a New York City police detective living a seemingly happy, perfect life with his wife Rosalyn. But his life is turned upside-down after Rosalyn is raped. Ezekiel tracks down and arrests the rapist, Gilbert Jax, but Gilbert gets off on technicalities. Seeking vengeance, Ezekiel takes justice into his own hands and murders Jax, making it appear to be a drug overdose. Only two months later, however, Stone is himself shot and killed in the line of duty – and finds himself in Hell.

Fifteen years later, there is a rebellion in Hell during which 113 damned souls escape and return to Earth. The Devil (John Glover) offers Ezekiel a second chance at life on Earth, if he can capture the 113 escapees and return them to Hell.

Capturing the damned is not going to be easy. Some of them have been in Hell now for centuries, and the longer they are in Hell the more powerful they become. The damned – including Ezekiel – cannot be “killed” by normal methods and are seemingly invulnerable, save for their eyes. As the Devil explains, the eyes are the “windows to the soul”. Of course, Ezekiel has the same weakness, and if he fails in his mission then he will face eternity in Hell himself.

Ezekiel awakens every morning (though he does not actually need sleep) to find $36.27 in his pocket, which was the amount he died carrying. He also awakens in the same clothes in which he died and does not feel pain – unless inflicted upon him by another one of the damned. He does have his police pistol on him, however, and it is the main weapon he uses against the damned – although sometimes he has to resort to more creative ways to bring in his prey.

“You know, before they invented the elevator, I had to walk all the way from hell.” – 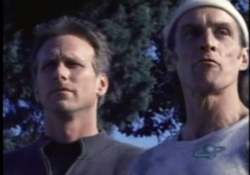 It is clear that many television viewers never gave Brimstone a fair chance, as the premise seemed too “dark” and “depressing”. A story about a man whose wife was raped, and who went to Hell? With the Devil as his primary sidekick? Not exactly your typical family-friendly tv viewing.

The shame of that is, the series was wonderfully acted by not just the main leads, Horton and Glover, but featured a fantastic cast of supporting characters/actors including Teri Polo as Ash, a Los Angeles detective Stone meets during his travels – and who has secrets of her own to keep. Lori Petty was also delightful as Max, the front desk worker at the fleabag hotel Stone moves into when he travels to Los Angeles in search of the damned.

But indeed, Horton brought a wonderful presence to the character of Ezekiel, conveying perfectly a seemingly soft-spoken, angst-filled hero who still possessed a rage and a darker side that could lead him to commit murder – something the Devil loves to remind him of and constantly goad him about, to question his real chances of redemption. And John Glover brings to life one of the most wickedly delightful, complex and captivating on-screen Satans of all time. It was because of Brimstone that I became intrigued by Glover’s other work, started attending his theatrical performances, and eventually went on to become his official webmaster. 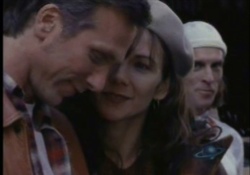 Beyond the acting, Brimstone was a well-written television series which actually managed to cover some of the deep issues of faith, forgiveness and redemption which are central to Christian theology. I believe it is a show that would in fact be a good one for Christian families to watch together (at least with teenage children) to discuss what it is that makes these damned souls “sinners” and what it means to seek forgiveness. Because in each episode, it’s not the fact that each of these damned souls committed a crime such as murder that led solely to their damnation. It was that they felt no remorse for their crimes; they did not turn to God for forgiveness or repent for their sins. Ezekiel is still consumed, after 15 years in Hell, with rage over his wife’s rape and feels no remorse for taking justice into his own hands and killing Gilbert Jax.

One of the most powerful episodes of the series is in fact titled “Repentance”, and focuses on a Dutch SS officer who now does feel true remorse for his crimes and is trying to redeem himself by helping the homeless. He understands why he was sent to Hell for his crimes, and eventually welcomes Stone’s “killing” shot. The episode ends on a slightly ambiguous note as to whether this one damned soul does in fact return to Hell, or if he has earned God’s forgiveness.

The show was also notable for its strong visual style and excellent musical score. Unfortunately, FOX never gave it a fair chance from the start. They aired episodes out of order, destroying some of the continuity being developed in the storyline (and making it appear as if Stone was jumping back and forth between New York and Los Angeles.) It was aired in poor time slots and bounced around, eventually cancelled while still in the midst of filming what would have been it’s 14th episode.

Despite numerous campaigns and a high popularity on websites like TV Shows on DVD, there appears to be no interest on the part of Warner Bros/FOX to ever release Brimstone on video, which is a terrible shame.

A Brief Glimpse of Brimstone

A few of the series’ most memorable scenes (warning: spoilers ahead!)

The first scene selected here shows how, despite its gloomy premise, there was a wicked sense of (dark) humor. The others might spoil some details of the later episodes but illustrate the wonderful acting and drama that elevated the show so much.

Although long off the air, there are still some websites devoted to the show or with sections for it, where you can learn more about Brimstone or explore fanworks created for it.

The Brimstone Zone: Brimstone section of the official John Glover website. Contains an episode guide, images, quotes, details from the series presskit and also the unfilmed episodes which were planned for the rest of the show’s first season.

Brimstone at Archive of Our Own: fan-fiction based on Brimstone

Brimstone at Fanfiction.net: more fanfic based on the series

Where are they now?

After Brimstone, Peter Horton largely became involved in television production and directing more than acting. His directing credits include episodes of Grey’s Anatomy, The Shield, and Once and Again. John Glover, as mentioned, took on the role of Lionel Luthor in Smallville, has made numerous guest appearances in various tv series, and continues to appear regularly in theatrical productions from New York to Los Angeles.

The Cult TV Book: From Star Trek to Dexter, New Approaches to TV Outside the Box 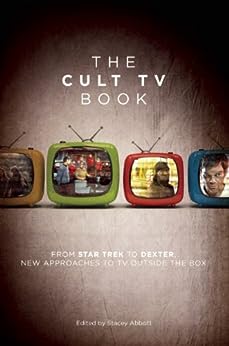 The Cult TV Book: From Star Trek to Dexter, New Approaches to TV Outside the BoxCHECK PRICE

Brimstone is just one of many “cult tv” shows which have drawn dedicated fans throughout the years. What is it that makes some of these shows, from Dark Shadows to The Sopranos, so important to fans? What is it that defines “cult tv” and turns some series from casual viewing into shows that compel people into analyzing, collecting, and even going to conventions solely dedicated to their celebration? If the subject intrigues you, then this book is sure to make for fascinating reading.