Are you in the cult of Stan Kenton? 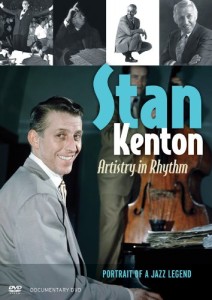 Stan Kenton is one of those modern jazz legends whose importance is gauged equally by those who champion his art, and those who deride it. Many critics point to his bombast, or in Stanley Dance’s opinion, “he made a Wagner Album”, Give me a break!

I choose to find the beauty in something and let that rule my thoughts rather than a few things that rub me the wrong way.

Kenton was disliked by elitist critics like Leonard Feather too, and loved by a cult following of musicians and fans who enjoyed a difficult at times music from a progressive minded big band leader.

No doubt I am one of those in the cult, I discovered Kenton’s music about 15 years ago. Along with the music of Don Ellis and Buddy Rich, I have spent hours upon hours enjoying the music of Kenton.

The Portrait of a Jazz Legend DVD release from 3 years ago, was very welcome. Being a jazz documentary junky like I am, I can’t get enough of former musician recollections, rare photographs, and concert footage.

Some may wish for more concert footage in the 117 minute running time, but the interviews with the late Kenton’s band members are very welcome and really what I was looking for. I feel like the history of the orchestra was thoroughly explained.

The DVD portrays Stan in an honest light, not soft soaping his alcohol abuse and other issues over the years. like many musical geniuses, they seem to have an equal number of personal demons following close behind those angelic musical gifts from God. Many times those demons threaten to destroy those very gifts, such is the irony of life I suppose?

You will get the lowdown on Kenton arrangers like Pete Rugolo, Bill Russo, Bill Hollman, and Johnny Richards. Also singers like June Christy, and other band leaders like Maynard Ferguson, and Gerry Mulligan get ample time discussed.

Kenton may have coined the term “progressive jazz”. Which makes sense to me, I can’t get enough of complex music. I still laugh to myself thinking about some this music being as much as 70 years old, and it still sounds modern, a real testament to the greatness of Kenton and his bands.

The Swinging years, the Afro-Cuban orchestra music, and the ultra progressive stuff gets plenty of discussion. The debate on whether Kenton should swing, or if he swung or not is debated and discussed.

Other than the albums themselves, and any other concert footage you can score on DVD, I have a hard time believing this Artistry in Rhythm DVD isn’t the definitive Kenton DVD.