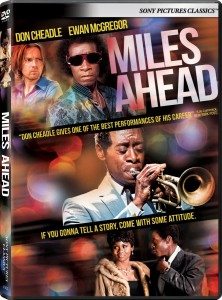 So long was the films arrival, that more than a decade passed before it finally moved into production.

Don Cheadle who was seemingly the Miles Davis estates choice before Don himself even knew it, was really the only man for the job, nearly monopolizing the entire vehicle, by co-writing, staring, co-producing, and directing the film.

Unfortunately do to the painfully limited release on April Fool’s day 2016, I was unable to fit the film into my schedule as only 2 places here in Dayton Ohio had the film for a very short and limited time to my knowledge.

Finally after 3 months and nearly 3 weeks, I received a DVD copy of Miles Ahead on release day July 19th 2016. I have seen the film twice, and here are my thoughts:

I like the film. let me state up front, I am a major fan of the 68-75 Miles Davis music, and even enjoy his last decade of music, which many a critic turns their nose up to.  The loudest criticisms of this film seem to stem from those who expected a tired biographical film done in the white-bread Ken Burns style? There are already many very good documentaries out there of Davis for that type of in-depth story telling on the trumpeter’s life and his music.

Director and star Don Cheadle makes a film that is very tight, and YES,  loose with the facts, though I could certainly see some of the artistic license plot-line happening during this 75-79 time in Miles life. Miles’ hedonistic lifestyle during this lost period of 1977-1980 portrayed in the film, was fairly accurate in tone,  according to several different books on the subject, he had lots of drugs, woman, and leaches hanging around everywhere.

I like that the film is honest in its portrayal of the flawed parts of Miles’ being. Those who love Miles, like myself, already know his story inside out, so we are left wanting more from this story, but I did like the film overall.

The film took a refreshing approach at Miles

I found the film refreshing in that it tried something different, and didn’t take the easy road. Most people I don’t think would have thought of The Lost Period of Miles Davis to base the film around, and it works well, showing Miles in a period where he is trying to climb up out of the abyss he was in both personally and professionally.

Yes, I was left with a feeling of, “man this film should have been 3 hours long instead of roughly and hour and a half”.  But honestly, to do the Miles Davis story right you’d have to have a TV series. I mean a HBO honest-to-god 10 episode event or something, if not multiple 10 episode seasons.

The relationship with Miles and dancer Francis Taylor could be such an epic tale if given the latitude of a miniseries, the all to brief flashbacks only whet the appetite for more music, and his relationships with his band-mates and other musicians.

That is the frustration of the film, how could you possibly tell this complex story in 90 minutes? The 1959 racist cop Birdland incident, which left Miles bloodied and humiliated, affected Miles for the rest of his life. This was touched on, but again, only in a matter of fact flashback, again how could just one film do any of it real justice?

In the end though, I am happy with the film.  Cheadle is believable as Miles and he sucks you in right off. After a few scenes he’s Miles, and you don’t doubt it for a minute. Is Miles Ahead the greatest film every made, not by a long shot, but it’s better than not having anything.

The pace of the film is very quick, maybe too quick.  The action packed plot line, where the flash backs originate from is believable, if not actually true. Ewan McGregor as the Rolling Stone Magazine reporter sidekick grates on you at first, but by the middle of the film I warmed up to the character.

If you are just getting into Miles Davis and want to know more about this Lost period where the meat of the film takes place, I highly suggest you read 2 Books: Paul Tingen’s Miles Beyond, and George Cole’s The Last Miles. If you read those books, you’ll see the outrageous so-called unbelievable stuff in the film could have happened.

I recommend Miles Ahead to anyone, knowing that the mega fan will want more, but those who don’t know Miles, will find it to be an entertaining action film introduction to Miles and his Music. I give it 3 out of 4 stars.