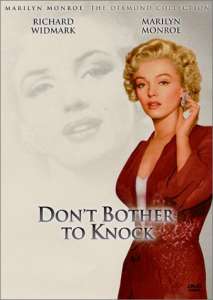 Don’t Bother to Knock. See it on Amazon.

I thought had seen Marilyn Monroe all her major film roles. However, one day while searching through the classic movie selection in a store, I came across one I had never heard of before. It was called Don’t Bother to Knock, a film noir from the 1950s.

Monroe seldom appeared in dramas that would allow her to show her acting skills. She was quite impressive on the rare occasions that she was given the opportunity to act in a serious role. This was the case in The Misfits as well as Don’t Bother to Knock.

Marilyn had always wanted to be taken seriously as an actress. I think producers chose to cast her in cheesecake roles because those films were successful. She was typecast as a dumb blonde, yet Marilyn was actually a very intelligent person. She lacked self esteem, which was likely the result of having a very traumatic childhood. Marilyn’s mother abandoned her when she was still a child, and she ended up in foster homes. Perhaps she was able to draw from these experiences to play this particular character.

Marilyn had appeared in several other movies prior to Don’t Bother to Knock. However, this film was her first starring role. She plays Nell, an introverted, soft spoken young woman harboring a dark secret.

The trailer is a bit cheesy in parts, but it will give you an idea what the film is like:

The  story takes place one evening in a hotel. Nell has been recruited by her uncle Eddie to babysit for a couple one evening. Nell starts going through the woman’s belongings after the girl goes to bed and finds expensive jewelry and a sexy negligee. Nell can’t resist the temptation to wear them and fantasize that they belong to her.

Meanwhile, Jed (Richard Widmark) and his girlfriend Lynn (Anne Bancroft) are having relationship problems. Lynn is also a singer at the lounge in the  hotel. After the two have an argument, Jed goes to his room and sees Nell from his window which is directly opposite hers. He calls her and although she initially refuses to meet him, on his second attempt he is successful.

Nell lets Jed believe she is staying at the hotel. In reality, Nell is mentally ill and had been hospitalized due to a suicide attempt. When the girl wakes up and identifies her as the babysitter, Nell becomes completely unhinged. The  suspense does not go over the top as some thriller movies do. It avoids the campiness of some thriller films.

You can’t help but feel sympathy for Nell in many ways, as she is clearly delusional. Widmark is credible as the cad who unexpectedly found himself  in a frightening situation and was unsure what to do to protect the girl and himself.

This film was the first for Anne Bancroft. One thing that bothered me was the obvious lip syncing when her character was singing. Perhaps people in the 50s were unaware, but today’s audiences know better. Otherwise there is nothing wrong with Bancroft’s performance, I just found the singing to be quite distracting.

Don’t Bother to Knock is a B movie. It was barely noticed at the time of its release, which was unfortunate for Marilyn.  I’d recommend it to anyone who is a fan of hers, and if you like film noirs from the 40s and 50s.