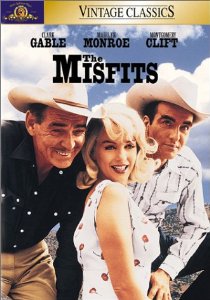 The 1961 movie The Misfits. Check details at Amazon.

One classic  movie I  saw recently for the first time is The Misfits. I really had no idea what the movie was about, although I thought it was a comedy.The title gave me that impression, along with what little I had heard about the film. Of course, Marilyn was frequently cast in cheesecake roles, even though she could act in dramatic stories. She proved it with this role. The Misfits is not a comedy, but a serious drama. It’s rather dark and brooding at times, with characters who are very troubled souls.However,you really come to care about these people, despite their obvious flaws.It’s a wonderful character study about individuals who have not yet come to terms with who they are and what they hope to achieve in life. Watching this is a poignant reminder that three of the cast members would soon die sudden and unexpected deaths. Clark Gable died days after filming was completed in 1960. Marilyn Monroe, of course, would pass away less than two years later. Montgomery Clift, who has a supporting role, also died suddenly in 1966 while in his 40s. The movie is about a newly divorced woman named Roslyn (Monroe) who meets cowboy Gay (Gable).  Roslyn has just obtained a divorce.  She’s depressed and doesn’t know what she wants out of life.  Her friend Isabelle (Thelma Ritter) tells her to throw her wedding ring into the river, a tradition in Reno after marriages have ended. Isabelle tells her she will never have to face another divorce by doing so. Roslyn hesitates before deciding against throwing it away. This would seem to indicate she doesn’t believe a second marriage would be more successful than the first. 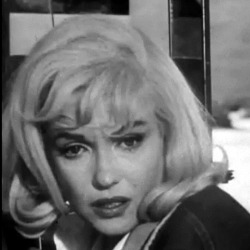 She meets cowboy Gay (Gable) who likewise has no goals or direction for his life. When Roslyn asks him what he does, he replies “just live”. The two start a relationship. Gay’s friend Guido (Eli Wallach) spends time with them, as well as former rodeo star Perce (Montgomery Clift). With nothing better to do, the men decide to round up wild Mustangs to sell so that they can be killed to make dog food. Roslyn is very opposed to this. The movie has strong animal rights overtones, which was rather revolutionary in 1961. Gay and Roslyn seem to be an unlikely pair. However, as the story evolves you can see that in many ways they are good for each other. Roslyn has a positive influence on him. They certainly are “misfits’ so the movie title is quite appropriate. Marilyn Monroe does some of her best work in this film. She’s very convincing as the troubled Roslyn. It’s too bad she was never taken seriously as a dramatic actress. The video below contains some rare footage of Marilyn as she was screen testing for the part of Roslyn. Filming of the movie was plagued with problems. The biggest one, of course, was Marilyn herself, who showed up to the set hours late. The temperature at the time in the Nevada desert was extremely hot, making it difficult for the cast and crew. Then there was the untimely death of Gable shortly after shooting was complete. The movie was not a success when it was released in 1961. It has only been in recent years that people have come to appreciate it as a poignant, thought provoking story. It was written by playwright Arthur Miller, whose marriage to Monroe was falling apart as the movie was being made. If you like serious drama, you will probably enjoy this film. It is gratifying to see Roslyn grow as a person. The ending is quite satisfying too. The one thing I would caution you about is there are some scenes in the latter part of the movie involving the rounding up of the wild horses that are rather disturbing. I actually fast forwarded through these. Without giving anything away, I can say it is essential to the story, but hard to watch. Thankfully those scenes are not very long.