The British Trio Returns, but Will Their New Release “spark” Attention?

This review was originally published at Yahoo! Voices on June 15, 2010. 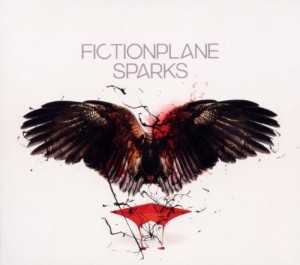 I have to confess, I’m a little bit mad at Fiction Plane right now. And that may be coloring my reaction to their new album release, Sparks.

Let me start with a little history. I first became a fan of the band in 2007 when they were touring as the main support act for The Police. It wasn’t an easy gig for Fiction Plane, especially with so many people assuming that the only reason they got the job was because lead singer/bassist, Joe Sumner, is Sting’s son. How much nepotism was actually involved in their scoring the gig, who can say for sure. But seeing them perform numerous times throughout the tour, I grew appreciative of their music and songwriting, especially as evident on their second full-length album, Left Side of the Brain, released that year.

The first few times I saw them perform, they were a bit rough around the edges, and ill-equipped to stand out on big stadium stages. With time and the pressure of performing for those tough crowds, they grew much stronger as a live band. I started going to Fiction Plane performances to see them by themselves after The Police tour was over, sometimes traveling good distances to catch them in different cities, or braving festival crowds to see them do a short, 20 to 30-minute opening set. I’ve always been fond of the trio format of a rock band, and with guitarist Seton Daunt and drummer Pete Wilhoit, the band showed promise to grow into something really unique and noteworthy. I was hooked and eager to hear where they would go next.

But now it feels as though Fiction Plane has decided that the United States and their fans here aren’t worth their bother. Their third full-length album, Sparks, was released in continental Europe and in the United Kingdom in early May of this year. There has been no definite announcement of a United States release, nor any touring in support of the album stateside-never mind that some of it was actually recorded in New York City in the fall of 2009. I was in the audience for a brief “preview” show last year at Arlene’s Grocery in NYC, and left excited by the prospect of hearing these songs live again once they’d been polished up for the album. Now it seems as though that brief preview set was the last chance I may have to ever see Fiction Plane perform live, unless they change their minds about coming back to America.

It is understandable in this tough, competitive market for a band to concentrate its efforts on where they think they can reap the most rewards. Yet it’s still a disappointment to myself and other U.S. fans who now feel “abandoned,” in a sense, by the band we grew to love and tried to support as much as possible. I fear these feelings may have tainted my reaction to Sparks, which I did get the opportunity to purchase recently and compare with their past work. While I think some of the songs are great, and a solid step forward for the band, I am rather disappointed in the rest. Sometimes it feels as though the band is still struggling to come together with a unique sound not overly derivative of other bands’ work. It’s not as cohesive a record as Left Side of the Brain was, and perhaps not likely to convert new fans to their work.

Sparks opens with “You Know You’re Good (La La La Song),” a high-energy, ska-influenced rocker. It’s a good start to the proceedings and I can imagine it will be a great track live with its the sing-along chorus-pity I won’t likely get a chance to enjoy that first-hand myself! Next is “Out of My Face,” which I might have chosen as the album’s first single. It’s a great showcase for Joe’s singing, with a melancholy sound and immediately memorable melody. I tend to find Fiction Plane’s strength lies with these more atmospheric songs, where their songwriting shines and Joe’s vocals come through so strikingly. At times he can sound eerily like his father, Sting, but at other times his deeper voice has a unique and attractive note to it all his own.

“Push Me Around,” the first official single from the album, is a disappointment. It sounds like a lazy reworking of their last album’s first single, “Two Sisters,” but not as immediately catchy. “Talking” attacks next with a driving beat that has just a slight ska swing to it. Not my favorite track on the album as it grows a bit repetitive rather quickly. “Revenge” is better, with a harder rock edge that gets the feet moving. This one should be another excellent live track as I can see even stadium crowds getting into it and singing along with the hooky chorus.

“Two Sparks” has a retro-80s feeling, somewhat reminiscent of Oingo Boingo. Drummer Pete Wilholt puts on a good show with some very Stewart Copeland-like flair and tricky riffs, which might not be unexpected after spending months on the road with The Police. Still, it feels flat and once again derivative. “Tommy” is easily my least favorite track on the CD and one I began skipping over quickly after a few listens. It’s droning, screeching, and monotonous, like some kind of take on 90s grunge rock without any conviction behind it.

Fortunately the album gets back on track with the final four songs. “Humanoid” fades in slowly with a spacey, trippy sound that recalls Radiohead with a strong beat that builds to a rocking chorus. “Zero” is a great number with a reggae feel that definitely calls back Joe’s familial ties. He hits some lovely high notes that remind one of Sting’s early work with The Police, over a catchy bass line, rocking rim shots and drum fills. “Russian LSD” is a groovy, swinging number that made me think of The Doors. Joe seems to almost channel Jim Morrison at times here with his trance-like vocals. “We’re like lovers in the third ring of hell,” he croons over sexy bass-work and a 60s-style organ line. This track is certainly not hell on the ears, and promises to be one of my endearing favorites from the album. “Denied” is the final song on the standard version of the album, one which could easily have been part of Left Side of the Brain with its medium-heavy rock reminiscent of U2 and Coldplay but with a distinctly Fiction Plane-like sound.

And that’s part of my problem with this album-there’s not enough here that feels genuinely distinctive to Fiction Plane. I keep getting reminded of other bands as I listen, but often with Fiction Plane coming up short by comparison. They do best when they reach for a unique, cohesive sound, but then run the risk of simply repeating themselves, as with “Push Me Around” sounding so much like “Two Sisters.” I’m not honestly sure yet how much I’m going to feel like listening to this album in the future as I have in the past to Left Side of the Brain and Everything Will Never Be OK, which both sounded more original.

Another problem I have with the band is a little more difficult to describe, but it’s a certain “coldness” or distance from the listener that makes it, at times, hard to connect to their work. An audience needs to feel an emotional connection to music, especially to the vocalist in a band and the lyrics he or she is singing. Sting was sometimes criticized in The Police for his vocals being too cold or distant, yet the warmth and character of Andy Summers’ guitar work and Stewart Copeland’s personality-filled drumming always made up for that to me. While Wilhoit and Daunt are proficient enough at their instruments in Fiction Plane, their playing fails to bridge that gap between band and listener left by Joe Sumner’s cool persona and emotional distance.

But again, this could all be my crankiness over them not touring America. Perhaps if they were, and I’d have the chance to hear these songs live, my opinion of the material would improve and I could give it a more fair listen. Otherwise I have a hard time rating the album as more than a C+/B- as the few really strong tracks can’t make up for what is lacking to me in the others.