Rock Jazz at its Best:

Understanding the Canterbury scene is a tricky proposition, mainly because some think of the scene as folksy progressive rock like Caravan, and Hatfield and the North, while others think of the avant-garde style of Henry Cow and Gong.

The former style being more listenable to the masses, while the latter has less structure and is more challenging to the person more familiar with the simpler blues-rock styles. 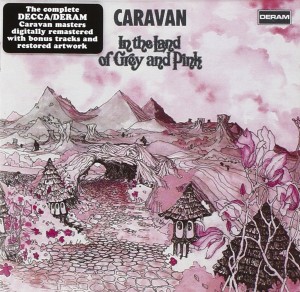 Personally when I think about the Canterbury scene, I can not separate the Australian Daevid Allen from it. Allen seems to be the central character, and possibly the founder of the movement.

If there were indeed a founder, Allen would seem to the most logic person to give the title to.

Allen introduced Jazz to drummer and fellow founding member of Soft Machine Robert Wyatt, then eventually Allen went on to form Gong. After Allen got bored with the other members of Soft Machine, their unwillingness to sell their souls to his vision, that vision was finally realized with Gong.

Other Bands like Gilgamesh and National Health were also central to the scene. Sometimes people lump the Andrew Latimer band Camel into the Canterbury scene? I never understood the connection with Camel, yes, bassist Richard Sinclair did appear on a couple of late 70’s Camel albums, but those albums have very little to do with the Canterbury scene sound in my opinion.

I love Richard Sinclair’s voice, he sounds like what progressive rock is to me, more than any other singer from the era.  He is also an accomplished guitarist and bass guitarist.

In 1972 he founded the band Hatfield and the North, as mentioned  played on a couple late 70’s Camel albums, Rain Dances and Breathless. In fact, 3 of my picks below are either Caravan or Hatfield and the north albums. I really appreciate their style of jazz rock, or “rock jazz” more properly.

Caravan had a way of melding the jazz, folk, and rock in such a way that it seems like a new musical form, never just mimicking a certain style for effect.

Third is very avant-garde, and barely resembles anything like what you’ve known as progressive “rock”. The music is sometimes considered jazz rock yes, some jazz style instruments are used, but this doesn’t sound really all that straight ahead jazzy to me either. In spots yes, but a lot of odd stuff here, I  like it, you could take a while to absorb this album.

The main thing you must understand is, Third is really more in line with post bop modern jazz rock, though even the rock stylings aren’t that pronounced, I have listened to this album maybe 5 times total, and I am telling you, no body was playing anything like this in the rock world.

Maybe Miles Davis was heading this way? Critics say this music was influenced by the Davis album Bitches Brew. maybe the influence is in the cold barren land scape that the music brings to your mind? The mood is unsettling to say the least, but this music was created virtually at the same time as the Davis masterpiece, how could Bitches Brew be an influence?

Third was originally released in 1970, and issued as a double vinyl on Columbia Records, the music was 4 side long Monsters. “Facelift” the most free form of the tracks, and probably left a bunch of first timers, and or Soft Machine diehards cold. I am sure many people back then, who were used to the previous albums, jumped ship quick after hearing the lead-off track, it’s not easy listening.

Fact is, only one side even remotely resembles progressive rock on the entire album, “Moon in June”, the LAST track ever to have vocals for soft machine as well. So considering this, Third must have been a bit of a disappointment.

One thing that might frustrate, though the remastered CD was cleaned up a bit. Third consists of live music and home tapes that have been some times haphazardly spliced together, this lends its self to a raw freewheeling sound, that some won’t appreciate, it’s not an easy listen.

When drummer Robert Wyatt got fired or left Soft Machine, he joined keyboardist David Sinclair who had left Caravan to form the band Matching Mole,” try finding a first press vinyl copy of that at a decent price?”.

Caravan brought in Steve Miller to play keyboard, not the “Joker” Steve Miller. Miller was an accomplished jazz player, and this fact really changes the sound of the band. To my ears, Waterloo Lily loses some of the folksy charm Caravan was known for, and that is the sound I think of most when pondering the music of the Canterbury scene.

Waterloo lily has some expert playing, a tight jazzy aesthetic breathes throughout the vinyl play back, the jamming brings to mind some of the improve that Traffic was laying to wax at the time on John Barleycorn Must Die.

“The Love in Your Eye Suite” hearkens back to the Sinclair key board days, reminding you this is a Canterbury band. I always liked Waterloo Lily, as a jazz fan, I can relate to the fusion, but don’t let the jazzy style scare you off, this is a progressive rock album pure and simple.

Gong which was  the band founded by beatnik Daevid Allen. The album YOU, is in my mind that bands masterpiece. Certainly one of the better space rock albums as well.

YOU is the third in the Radio Gnome Trilogy, and is basically long compositions bolstered by smaller sketches, most Gong-heads consider YOU to be the lesser of the trilogy.

YOU definitely seems to take its self way more seriously than Angels Egg and Flying Teapot, those, I think, better sum up what Gong is all about, if you find your way to Gong through You, it might be a let down as you back track into the early 70’s.

I was thrilled when I was able to obtain a vinyl copy of YOU for 10 dollars, a real steal in my book, I just love that space rock sound in analog.

Hatfield and the North: The Rotters Club

Both Hatfield and the North albums could easily top this list for me, The Rotters Club and the self titled début are just incredible pieces of jazzy progressive rock .

Former Caravan vocalist/bassist Richard Sinclair formed the band with Pip Pyle on drums Phil Miller on guitar and the last piece Dave Stewart does on keyboards, then a vocal trio of female vocalists.

The best way to describe Hatfield and the North’s debut, is think of an easily accessible sound on the surface, with much more complexity than you realize, especially with the jazz time changes and surprisingly complex rock riffs.

When the band added the stellar Dave Stewart Keyboard sound on top of the female vocal trio you have a winning formula that you must hear to fully understand.

Caravan: In the Land of Gray and Pink

It would be hard to say any album is more quintessential than Caravan’s In the Land of Gray and Pink within the Canterbury sound, the third and best album in my opinion from the band. The perfect combo of jazz, English traditional folk music, classical, and rock.

Some of the highlights of In the Land of Gray and Pink are Golf Girl with Richard Sinclair’s thoroughly English vocals, This ain’t Buck Owens, that’s for sure. Sinclair is also splendid on “Winter Wine”.

Undoubtedly though, the centerpiece of the album is the 20 plus minute epic, “Nine Feet Underground” One of the hardest rockers from Caravan, with a cool Cream style riff Ala “Sunshine of your Love” during the last half.

If you are new to the progressive rock genre, the Canterbury scene is great place to start. Gong, Soft Machine, and Caravan should certainly not be missed. Oh, by the way, “Camel”, though aren’t Canterbury scene, they should still be listened to.

*All photos used with permission, via Amazon.com*