“After Ben”: A contemporary gay romance about moving on that fails to move fast enough. 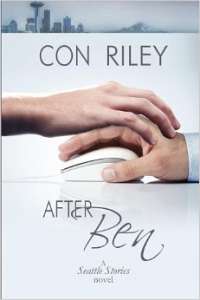 “After Ben” by Con Riley. Buy it now at Amazon.

A year ago, Theo Anderson unexpectedly lost his longtime partner Ben. Since then, he’s been living in a state of limbo, grieving for his loss and unable to fully move on with his life. Beyond his job, the only thing Theo has to keep himself occupied is a local political forum online, where he engages in debates with other Seattle residents, all anonymous behind their screen names.

One day a new member of the forum, “Morgan”, comes along to liven things up and catches Theo’s attention. At the same time that he starts private messaging with Morgan, he allows himself to explore some casual attention from Peter, an attractive man about his same age at his gym. Peter is clearly interested in Theo and seems like a great guy, but is Theo really ready to take that step into a new romance? Meanwhile, things are stirred up at Theo’s office when he hires two new interns, Evan and Joel, who couldn’t seem to be more different from each other.

Theo is increasingly drawn to sharing his story and his troubles with Morgan, and they even begin flirting with each other—but Morgan refuses to meet Theo in person. Will Theo ever find out who Morgan is, and will he be able to find love again: with Peter, with Morgan, or with someone else?

However, I probably should have read the first chapter excerpt on the Dreamspinner Press website before ordering the book—because I might have realized how much I disliked the author’s writing style and that “After Ben” was going to be a very tedious 300 pages of so little happening. I only finished this book out of a sense of obligation so that I could post this review: I found the novel utterly boring and bland, a story full of characters I never felt engaged with and where I kept waiting for an actual plot to kick into gear. Unfortunately the “plot” basically boils down to this: Theo is depressed and can’t commit to a new relationship. Theo hangs out on an internet forum and meets a mysterious stranger. Theo hires interns who are supposed to be funny and cute, and there is a little office drama over who is attracted to whom. Theo finally finds out who Morgan is. He finally is able to start a relationship with someone new. The end.

If that’s all you need for 300 pages of a novel, then maybe this is a book you’ll enjoy. Me? I want something more to happen than that for such a time and reading commitment.

“After Ben” also suffers from a terrible case of authorial “telling-and-not-showing” syndrome. That is, we’re repeatedly told how clever and witty Morgan is on this political forum, but we don’t really see any examples of him in action. Yes, we are given snippets of his PM conversations with Theo but that’s it. Theo’s own postings there are never actually shown (until just about the very end of the story in one of the final chapters.) Paragraph after paragraph gets devoted to discussion of this forum and the postings there but we don’t see any of it except in summary:

“Joining a discussion on free trade, he supported Morgan’s argument, something he would never have done without the dose of corporate reality he’d had that afternoon, and then sat back, waiting for his virtual spanking. He moved from topic to topic—from the economy to the new tax code to a local politician caught with his pants down—playing the devil’s advocate.”

Yep, that’s some real high drama and engaging reading. So much of the book is padded with paragraphs and paragraphs of “telling”, of Theo’s thoughts and reminisces of Ben, of what people are doing or have done in the past, that it just drags and drags and left this reader feeling completely distant from the characters, not caring at all how things were going to work out between them.

I also didn’t expect so much of the novel to be devoted to the young interns at Theo’s office (I think it’s an architecture firm? Or something similar? We hear so little about Theo’s actual work as much time as he spends there, beyond talk of files and having to downsize his  department due to budget cuts.) So even though I bought this book to read a mature romance, instead I got a story full of young teen angst and puppy love that I did not want. (Also, the novel seems to suffer from Everyone Is Gay syndrome as well, save for Theo’s parents and his office assistant Maggie.) Then I see that the author has published several other books set in this same universe, so I gather all that time devoted to these other characters was supposed to get us interested in wanting to read more about them? I’ll pass.

What else made me less than satisfied with this book? I wanted more of the Seattle setting and environment, as I felt like “After Ben” could have taken place in any generic Big City USA. (The few scenes near the end that take place in Milan gave me a much better sense of surrounding and atmosphere.) There were also a few too many coincidences of who ended up knowing whom, and I correctly guessed who Morgan actually was as  soon as his character appeared in one scene early on.

All in all, this just was not an enjoyable read for me in any form or fashion, and my search for really satisfying original m/m fiction continues to be largely unmet. Maybe it’s just not the genre for me—or I need to stick with authors I already know and enjoy from their fan-fiction days, or who come strongly recommended by friends whose taste in romance fiction matches my own.