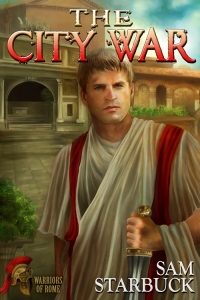 The City War by Sam Starbuck. Buy it now at Amazon.

History, and historical fiction, typically portrays Marcus Junius Brutus as a devious, bloodthirsty traitor: power hungry and ready to kill, as he does by taking a leading role in the plot to kill Julius Caesar. But humans are complicated beings and our motivations equally so. So what if Brutus was really a patriot strongly motivated by his love for his city, Rome, and a man manipulated into action by those he loved and caught between conflicting loyalties?

This characterization is what we find in The City War, a thought-provoking novella by Sam Starbuck that combines rich historical detail and political detail with a splash of steamy homoerotic romance. I came upon this title after expressing my continued disappointment with m/m-themed novels from several small presses (see my recent reviews of After Ben and The Melody Thief). A friend suggested I look at the offerings from Riptide Publishing, a small press she believed published more works that might appeal to my tastes and interests. She was definitely correct. The City War was their first title which caught my eye, with my interest in Ancient Roman history and time spent this year visiting Rome, Pompeii and Herculaneum. It is part of their Warriors of Rome collection, which I now intend to check out in its entirety given how much I enjoyed this title.

The City War begins as Marcus Brutus is traveling to his country villa for a short respite, a few days away from Rome where he can enjoy the company of his good friend, brother-in-law, and secret lover: Gaius Cassius. Such a relationship between two adult, equal males would not be looked kindly upon in ancient Roman society, so they carry on their meetings only at this isolated country home. Brutus’ teacher Aristus quietly disapproves of Cassius, and not just because of his sexual relationship with Brutus. He fears Cassius may be planning something treacherous, and on this occasion he appears to be correct: Cassius fears Caesar is making moves to name himself emperor and to destroy the Roman Republic. Cassius wants Brutus to join him in a plot to kill Caesar.

The City War takes us into Brutus’ conflict as he is drawn into Cassius’ conspiracy and the atmosphere in Rome becomes more dangerous for all involved. There is a wealth of detail about Roman life contained in this short novella, from raucous country feasts to secret political whispers at the Baths. Brutus’ wife Porcia also plays a small but important role in the story, which is nice to see in a m/m-themed story (a genre where often women characters are either nonexistent or poorly-realized.)

Also of notable interest in The City War is the surprise revelation that one of the characters is actually transgender (I won’t reveal who). At first I was afraid this development would turn the story into something preachy and awkward, some kind of lecture about gender identity and transgender social justice. But the issue actually is handled exceptionally well by the author, in a way that works for the Ancient Roman setting and beliefs of the people of the time.  Only one other character is aware of this character being transgender, and his initial confusion and then acceptance is wonderfully written. So I definitely recommend this story for anyone interested in positive portrayals of transgender characters in fiction.

All in all, this was one of the most satisfying m/m genre novels I’ve read in quite a long time. I am definitely going to be checking out more books by author Sam Starbuck, and those offered by Riptide Publishing. Really my only complaint and reason for not giving this book a 5-star rating is that I wanted it to be longer; I wanted to know what happened to these characters next, or perhaps read more about their past. Could we possibly get a sequel in the future? I’ll be keeping my fingers crossed!