Since 2005, I’ve spent every Labor Day weekend working the dealers room at Dragon*Con in Atlanta, Georgia. This is the first year since then that I’m skipping out on the convention for a number of reasons–mainly that the sheer expense of working the show has become such that it’s just about impossible for me to make any money doing so.

While I will miss many things about the convention–seeing friends, checking out the costuming, enjoying a few favorite Atlanta restaurants–there are plenty of things I’m not going to miss at all about not “doing the Dragon” this year. So many things, in fact, that I decided to make a list of them, lest I start feeling depressed about not being there a week from now, when friends are posting their squeeful pictures and reports.

Above image: The Dragon*Con 2010 parade; photo by sockii.

1. The Horrible Trip There (and Back)

Being a vendor, there’s no way for me to fly to the convention; I’ve got to load up the CRV and hit the road. A road that is over 750 miles long and generally takes somewhere around 15-16 hours of driving time with traffic, nap breaks and just needing to get out and s-t-r-e-t-c-h. It’s always hell, no way around it, even with splitting the drive with my sweetie. We always arrive home exhausted, cranky, sore and miserable. 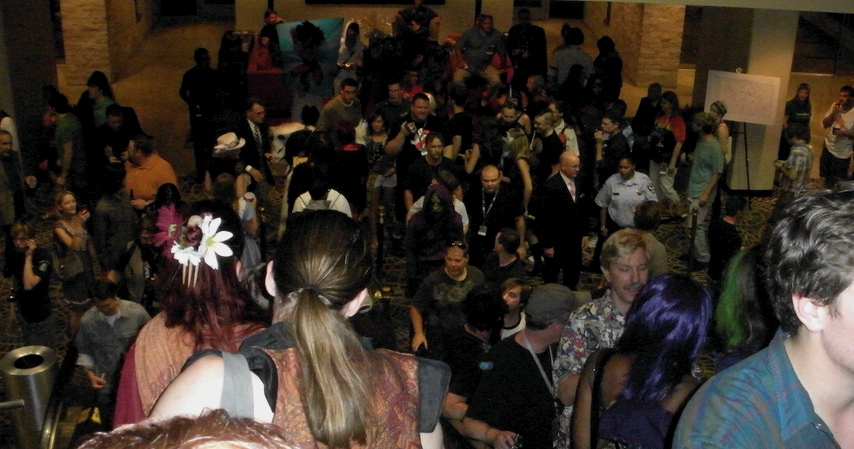 Welcome to Dragon*Con! Photo by sockii.

I don’t do well in really crowded spaces. That makes Dragon*Con a pretty uncomfortable place to be, given you’re basically dealing with 50,000+ people jammed into few hotels and meeting spaces for 4 days straight. One nice thing about having a dealer’s table is it always means I have a tiny refuge of breathing room to myself, safe behind my table. But just trying to get from there to, say, the nearest bathroom can involve a major undertaking of maneuvering through the crowds, squeezing past shoppers, and trying not to have a panic attack.

The crowds especially freak me out on the escalators, where people don’t seem to realize that when there are about a hundred people right behind you on it, when you get to the end you need to step away and move on as fast as possible, not pause to try to get a photo of some costume or chat with your friends. Ugh!

Buy This at Amazon.com

I hate Starbucks Coffee. Haaaaaaaaaaate it.

I like to drink my coffee black, and Starbucks Coffee is undrinkable (to me) in that format because it’s so burnt-tasting and only tolerable when loaded up with sugar, flavorings and whipped cream. Not my thing. And yet, Starbucks is about the only kind of coffee one is seemingly able to get anywhere in and around Dragon*Con, save at the Peachtree Center Food Court if you’re able to brave the crowds and the lines to get it.

So I end up being cranky either because of

a) not getting my necessary morning caffeine fix or

b) having to get it via crap coffee I hate drinking.

Either way, I’m generally not very fun to be around in the mornings at Dragon*Con because of my lack of a good cup o’java.

By Monday morning at Dragon*Con the funk is just about unbearable. I think most of you know what I’m talking about. If not, enjoy this little ditty–although you might want to hold your nose:

It’s not just working a con that’s so expensive and basically a money-losing venture, not a profitable one. It’s the hotels. The overpriced food. The cost of autographs and photo-ops. Let’s just say the money I usually spend on Dragon*Con could easily cover a pair of round trip plane tickets to Italy. So yes, that’s what I’m going to choose to spend that money on this year instead.

Want to Know More About Dragon*Con?

Previous pages and articles by sockii

Top 10 Awesome Things I Saw At Dragon*Con 2012
Dragon*Con is the East Coast’s largest annual gathering of all things fun, fabulous and fannish. From comics to steampunk, scifi to Sherlock Holmes, cosplay …