Official Dragon*Con Logo. Source: DragonCon Media Press Kit. All other images on this page are by the author, sockii.

Dragon*Con, held in Atlanta, Georgia over the Labor Day weekend, draws over thirty thousand attendees and is only getting bigger by the year. Fans of science-fiction, fantasy, film, comics, anime and music convene annually on downtown Atlanta to shop, attend panels, experience live entertainment, dress up in costume and enjoy the company of other genre enthusiasts. Dragon*Con can be a great experience, but it can also be wearisome, expensive, disappointing and even hazardous to one’s health if not careful.

After attending and working the dealer’s hall at Dragon*Con for over five years, I’ve had good and bad experiences there, as well as heard triumphs and horror stories from friends. What follows are my tips for making the most of the Dragon*Con experience. These tips should be especially useful for any first-time attendee, or those who have not been for years and are unprepared for how much the convention has grown and expanded with time. 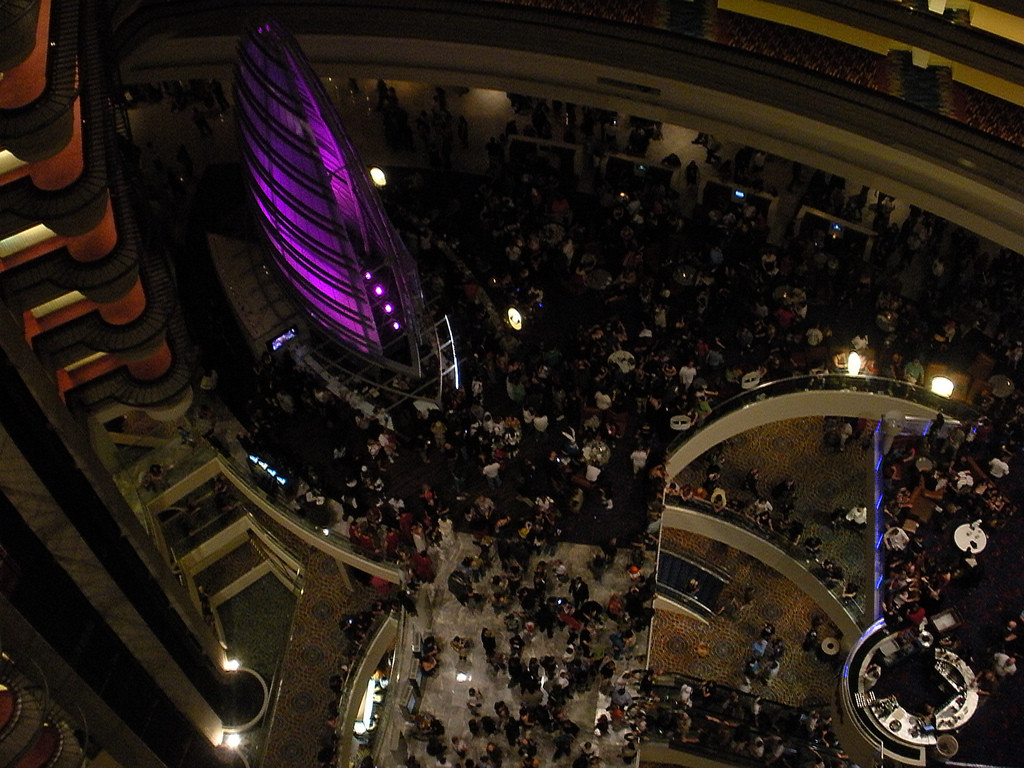 Massive swarms of Dragon*Con attendees at one of the main host hotels, the Marriott Marquis.

1. Be prepared for crowds. Big crowds.
Dragon*Con draws tens of thousands of attendees flooding the corridors and meeting rooms of its four host hotels for the entire Labor Day weekend. At times, the crowds can become completely oppressive, especially in the dealers hall, or in the evenings when people dress up and pose for photographs throughout the hotel corridors and common spaces. If you have difficulties dealing with large, slow-moving crowds or tight spaces, evaluate carefully if Dragon*Con is really the convention for you. I am mildly claustrophobic and have on a few occasions come close to having a panic attack from being stuck in the middle of a packed, unmoving-crowd. Be patient, try to stay calm, and attempt to avoid crowded escalators if and when you can take the stairs instead.

2. Be prepared for lines.
Lines are an unavoidable part of the Dragon*Con experience. People will begin lining up hours in advance of a popular panel or actor appearance in order to secure a seat. Convention registration, even if one is pre-registered, can take several hours on the Thursday night before the convention. Autographs with popular guests regularly entail standing in line, repeatedly. Even getting a cup of coffee at the Starbucks in the Marriott hotel can involve standing in a 20-30 minute line. Patience is the key to surviving standing in so many lines for so long. Bring a book or magazine to read, or your mp3 player to keep from getting too bored while waiting around. Seek out food and beverages outside of the host hotels, as a short walk may actually save you some time in the long run. 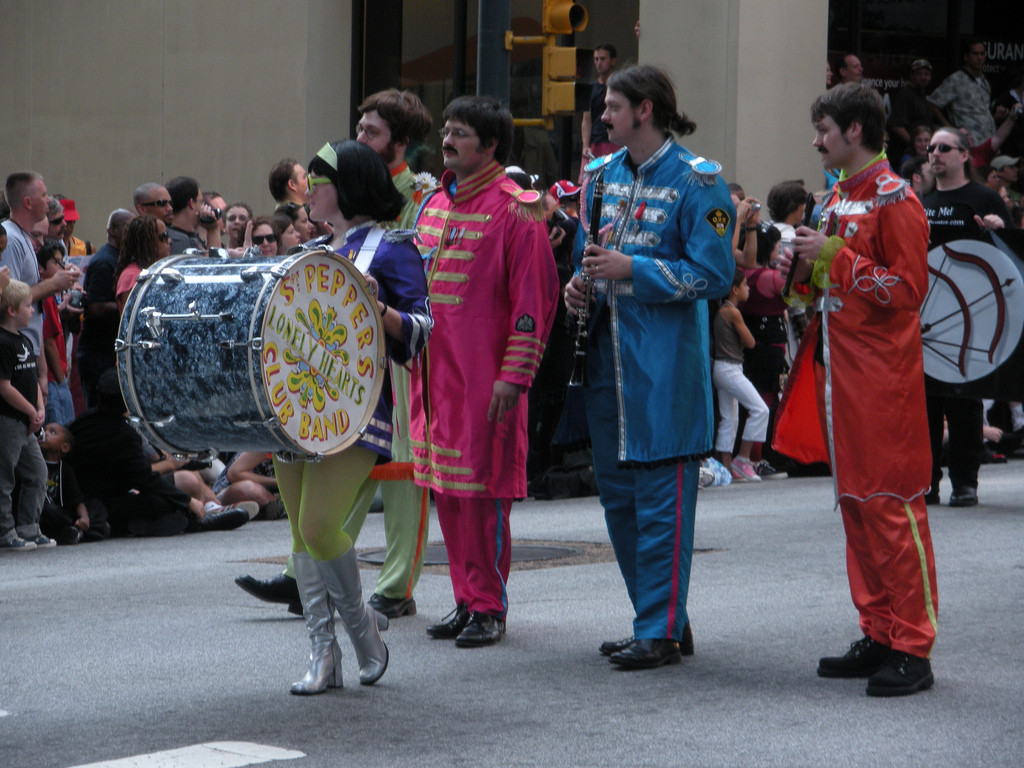 The Dragon*Con parade is always a huge draw. Be sure to claim a viewing space early!

3. Plan your schedule, but don’t be upset if you can’t make it to everything you want to see.
Study the Dragon*Con pocket programming guide as soon as you can acquire one, and start making notes on the things you absolutely do not want to miss. Inevitably you will be disappointed that two panels you want to attend will be scheduled up against each other, or immediately following each other in different hotels where you won’t be able to get there in time to line up. Therefore you need to prioritize. Plan for line-up time before the panels you expect to be most popular. Walk around and figure out where the panel rooms are in advance, as well as the fastest routes between them.

4. Don’t impulse-shop.
Dragon*Con is a wonderland of toys, artwork, jewelry, books, costuming supplies, comics, dvds and so much more. With two exhibit halls, a dealer’s hall, an artshow and an artist alley, there are many rooms to explore before deciding what to spend your money on. Shop around and compare prices, quality, and selection so that you won’t be disappointed by your purchases. Many vendors will also be more willing to bargain towards the end of the convention, on Sunday and Monday, than they would at the start. Also remember that not all vendors accept credit cards, so come to the convention with sufficient cash. ATM machines on-site can run out of money very quickly! 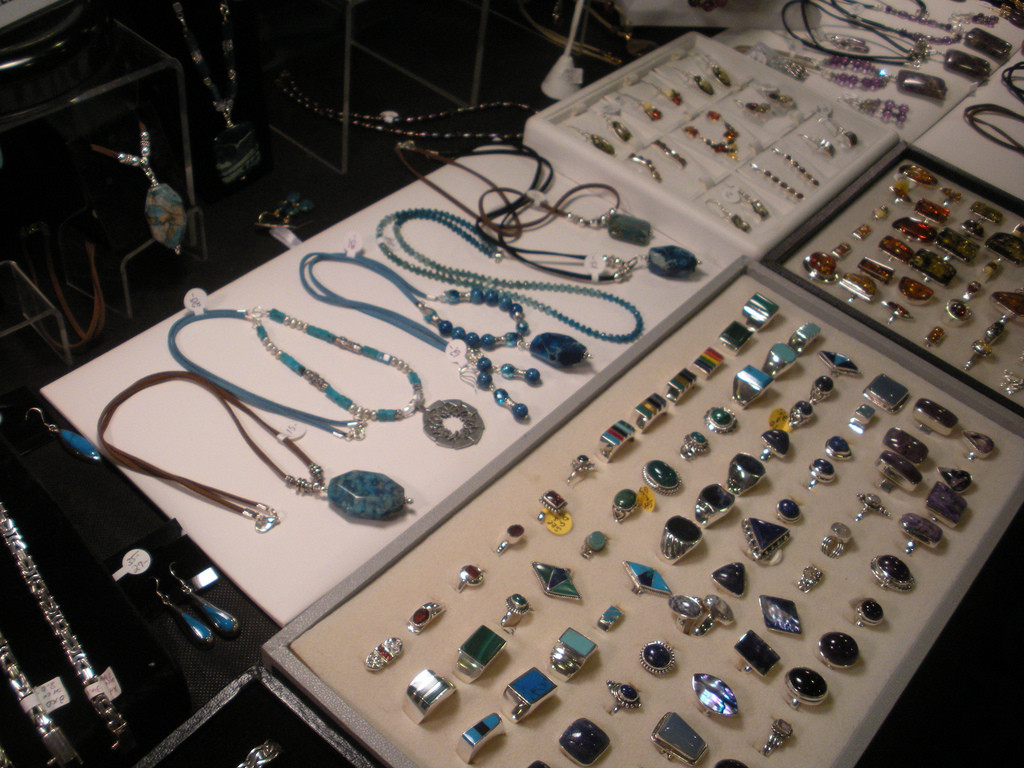 Mind your budget while shopping the dealer’s room and exhibition halls.

5. Plan a budget for the convention–and try to stick to it.
It’s easy to get wrapped up in the frenzy of Dragon*Con and spend far more money than you intended. Autographs and photos can get very expensive, very quickly, with celebrity guests charging anywhere from $20 to $200 for their signature and/or a posed photo. Food and drink in the host hotels and surrounding area is not cheap, either. Figure at least $50 for food and drink a day for modest eating selections, more if you plan on enjoying alcoholic drinks or eating in one of the better nearby restaurants. You might want to consider packing snacks, soda, water, and other food items with you to keep in your hotel room, especially if your room has a mini-fridge or kitchenette, in order to save money.

6. Get enough rest.
Dragon*Con programming starts early in the morning and runs into the wee hours of the night, with many room parties going on well beyond the official convention hours. Even if you don’t want to miss anything happening at the convention, don’t miss out on getting enough rest. Trying to survive a convention on only an hour or two of sleep here and there is a surefire way to end up feeling miserable and potentially physically ill after the convention is over. With so many bodies packed into such a tight space, it is easy to pick up germs, colds, and other bugs if your immune system is compromised. 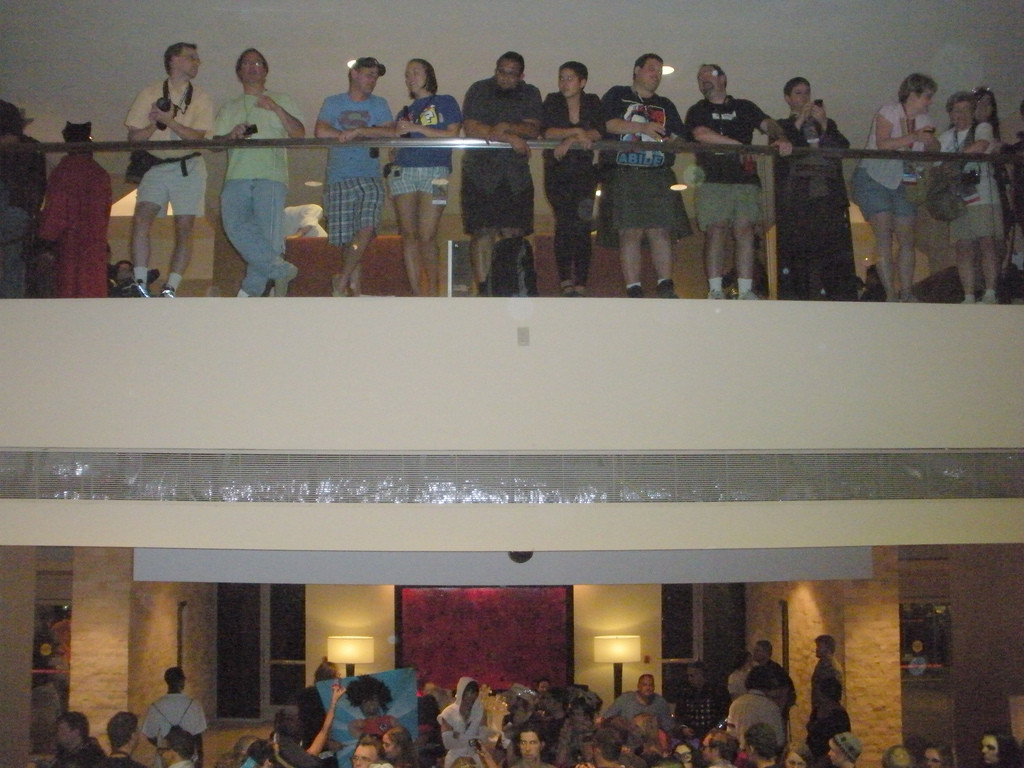 People-watching: one of the major activities at Dragon*Con.

7. Be respectful towards the celebrity guests, and other convention attendees.
When attending panel discussions by actors and filmmakers, or getting autographs from them, be respectful. Do not dominate the guest’s time by asking lengthy, multi-part questions when others are waiting for their chance. Do not ask overly personal questions, or try to impress them or others with your obscure knowledge of their work. Do not bring gifts to give the guests, which will only likely be thrown away before they even return to their hotel room. If you happen to see or run into a celebrity guest in the hallways or at a restaurant, do not try to get an autograph or photograph for free, or otherwise disturb them. While some celebrity guests enjoy hanging out with the convention attendees, most want and need some “downtime” as well.

8. Be alert and aware of your surroundings outside of the host hotels.
Downtown Atlanta is relatively safe, but there are many street hustlers and homeless people about who tend to hone in on anyone who appears to be a visitor and uncertain of his surroundings. Refuse any such person who asks if you need help finding your hotel or other area attractions, or assistance with your luggage. There are several information booths along Peachtree Street where you can get legitimate help, or just walk into any hotel and speak to the concierge. If out late at night, travel with others in a group, or take a taxi. 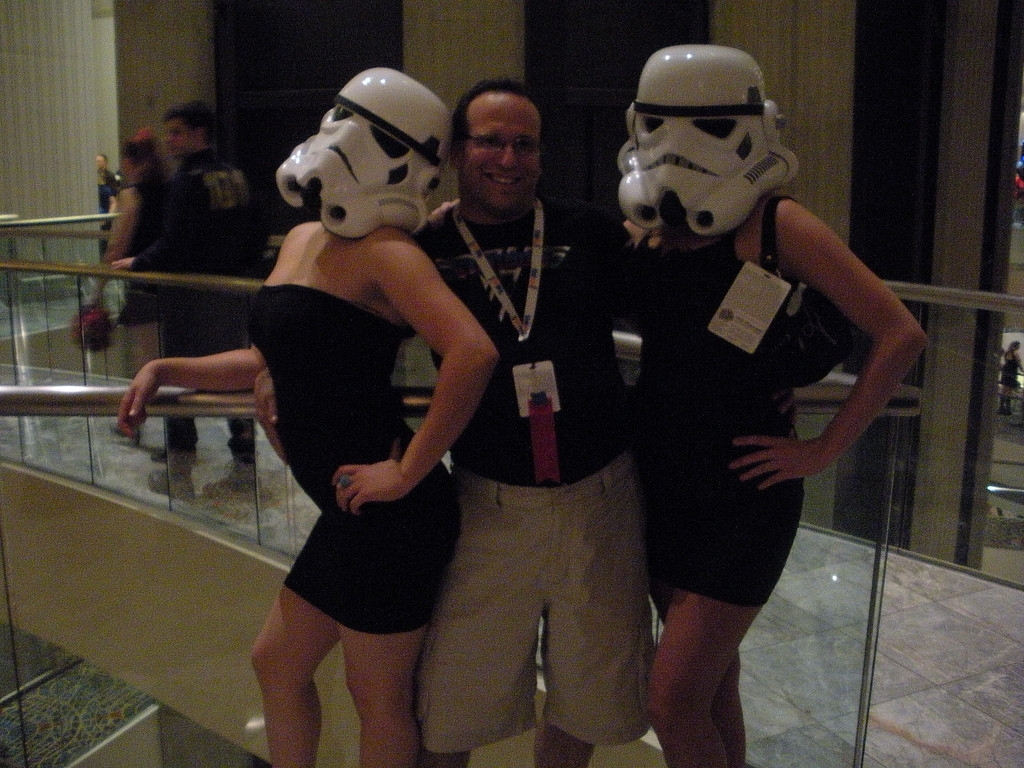 Enjoy the costuming – but be polite about it.

9. Just because someone is dressed provocatively doesn’t give you permission to touch them.
Costuming is a huge part of the Dragon*Con experience for many, and some people do dress in extremely racy or skimpy costumes. However, just because a woman may be wearing little more than a bikini and body paint doesn’t give someone else the right to touch her or grope her without permission. If you’d like to get a photograph with someone, please ask first. Stand next to that beautiful lady in the Xena costume, but don’t think you have the automatic permission to put your hand where it doesn’t belong while posing with her.

10. Party responsibly and look out for others.
Be smart, and don’t end up doing something you’ll regret afterward. Don’t assume that a “fandom space” such as Dragon*Con is automatically a “safe space.” Stories are increasingly appearing in the convention world of people being taken advantage of or harassed while under the influence of alcohol or other substances, or otherwise vulnerable. If attending a room party hosted by people you don’t know, go with friends and leave immediately if the situation becomes uncomfortable. Don’t go into an unknown person’s hotel room by yourself. If you believe you see someone in a bad situation, ask them if they need help. Get hotel or convention security if necessary. Help make the convention a safer and more enjoyable experience for everyone.

Dragon*Con
The 2015 Dragon*Con is being held September 4 – September 7, 2015. in Atlanta, Georgia. For more information, visit the official Dragon*Con website at http://www.dragoncon.org/.

This article was originally published on July 26, 2010 at the Yahoo! Contributors Network.
Sources: