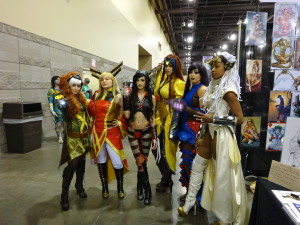 If you live in Phoenix and see Wonder Woman crossing the street, don’t be alarmed, she’d not chasing down a bad guy. Chances are, she’s headed to Phoenix Comicon.

Every comic book lover, steampunk junkie and people who just love to dress up are doing just that and headed to downtown Phoenix for Arizona’s major Cosplay Event, Comicon 2015. This is not something to miss if you’re a lover of science fiction, anime, time travel, art, books, video games and more. Even if you’re not a fan, just being around the creative energy of imaginative people could be enough to make you a fan.

This year we saw more groups of Cosplayers banding together, bringing to life whole casts of our favorite shows and movies. Star Wars was represented in all forms possible and Star Trekkies were in force however I was surprised at what I didn’t see – more Spock. Maybe fans are still in mourning, which is completely understandable. Live Long And Prosper my friends.

Anime characters are becoming more popular among teen girls, and the gore is getting gore-e-er every year. We saw more “Gore-Vendors” selling bloody shreds of once sweet faced baby dolls and other characters. Something else were the “big” costumes, robots, trees and people on stilts. 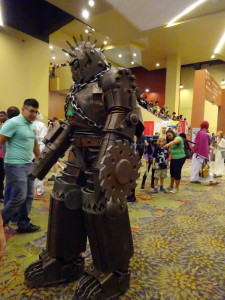 The band of women to watch were the Steampunked Ladies of X-Men. These six ladies represented their characters punked side in stellar costumes designed and made by Jen Broomall, Pencil Artist and Gabby Donathan of Maise Designs. At the well attended panel on Saturday afternoon, Jen and Gabby presented their work character by character, describing the detail work of each costume from sketch to finished product.

For those who’ve never made a cosplay outfit, think of it as Halloween on steroids. This isn’t a costume you’re going to wear in the dar. This is something that hundreds, if not thousands of people will see. And if it’s good enough, they’ll ask to take a picture of it too – so it has to be great! But creating what you see in comic books or movies can be really really hard if you’ve never done it before.

Many Cosplayers had developed businesses out of their love of costume design and creating, which is exactly what Jen and Gabby have done. Gabby admits that she doesn’t make all the props herself, her husband helps her with the electronics and this year, she had a sword digitally printed, something new for her. In the end, Gabby, Jen and all the girls of their group did an amazing job pulling it all together.

Vendors of all sorts packed the exhibitor hall of the Phoenix Convention Center. Artwork, comic books, graphic novels, jewelry, clothing, costumes, light sabers and more, so much fun stuff to look at! Authors of several genres had booths and people talking to them about their books. Michele Venne, my comicon guest and friend who is also an author found the environment to be exhilarating and inspiring. “To be around such creative and fun people makes me want to create more too.” 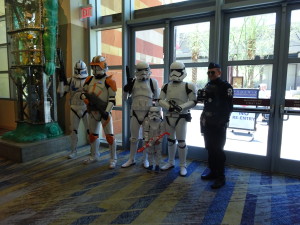 The best part has to be the kids. Dressed up to match mom and dad or stand out of the crowd with smiles to match (or not, depending on their character!) you know every one of them was having a good time. Especially this little stormtrooper who was invited in by the big guys for this photo. Stormtroopers ROCK!