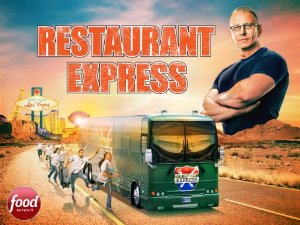 Restaurant Express is one of the newest “reality”/cooking competition shows on the Food Network this Fall 2013. The show is hosted by Robert Irvine, who has previously been featured on FN’s popular series Dinner: Impossible, Restaurant: Impossible and Worst Cooks in America. While I’m not sure if this will be a recurring series or just a one-season special, I have been enjoying it more than many of their other recent competition shows such as the horrible Food Court Wars and Guy’s Grocery Games. The show has been a fun mix of showcasing not just cooking skills and creativity but also the economics of the restaurant business, where even the best chefs can fail if they don’t understand price points, budgeting, and knowing what a particular market wants.

The premise of Restaurant Express is that nine finalists all are hoping for the chance to open their own eatery – although that’s not exactly what the fine print of the show promises. As per the Food Network channel press release, “The final contestant standing wins an opportunity [to] help launch and become the executive chef of a restaurant at the M Resort Spa Casino, just minutes away from the Las Vegas Strip.” That is,  they might get a chance to work in a professional kitchen but they aren’t going to be running/owning their own any time soon (at least not just by winning this competition.)

Even so, these contestants have all been eager for the job opportunity and many of them had the required “sob story” backgrounds for such a show. There was Kimmy, who had her own restaurant until a car accident cost her the business and now she’s working as a waitress. And private chef Patrick, who was going to open his own restaurant until a business associate ran off with his life savings. Every episode, the contestants have traveled from location to location on the Restaurant Express bus to face a different challenge, from revitalizing a failing restaurant in Los Angeles to operating a food truck at three different locations, each one catering to a different type of clientele.

I’m not at all surprised that after six episodes, the final three left in the competition are Adam, Jan and Seonkyoung. Adam has seemed to have the best business sense and understanding of budgeting and profit margins from the start, even if his food has not always been the most memorable. He’s also the necessary  “villain” of the show, with his cocky self-assurance and attitude that he just “deserves” to win because he’s so much better than everyone else. Jan is a “long time Food Network fan” raising seven kids (4 her own, 3 her nieces/nephews), so she represents that classic “working mom” demographic FN loves to celebrate and spotlight. She does seem to be a decent cook, albeit limited in her repertoire of comfort-food dishes and with no experience in the restaurant business. She really deserved to go home after the last challenge, but of course Robert “changed the rules” at the last minute to keep her in the finale. I don’t expect her to have a chance to actually win it all, however.

That leaves Seonkyoung, who has been my pick for the winner of the show since early on in the series. Seonkyoung, one of the youngest cooks on Restaurant Express at 29, grew up in her family’s restaurant in South Korea before moving to Mississippi. She credits the Food Network for helping her learn English and about American culture and cooking – which might make you roll your eyes except that she is so energetic, determined and clearly a great cook. Even when she’s made mistakes related to not knowing the restaurant business or how to prep food effectively in a large kitchen, she’s impressed Robert and diners alike with her excellent Asian-inspired food. Hers have been some of the few dishes in the show I’ve really wanted to have the chance to eat. She definitely seems like a star in the making, perhaps for her own Food Network show some day, if not in a restaurant kitchen. My prediction therefore is that Adam and Seonkyoung will go head-to-head in the final battle so that Seonkyoung can triumphantly defeat “evil” Adam, proving that a spunky, determined immigrant really can achieve the “American dream”.

Well, it makes for feel-good television entertainment, doesn’t it? The finale of Restaurant Express will air Sunday December 15, 2013.

Bring some “Impossible” cooking techniques to your home kitchen.

Impossible to Easy: 111 Delicious Recipes to Help You Put Great Meals on the Table Every DayCHECK PRICE

And the winner is…

Seonkyoung defeats Adam in the finale of Restaurant Express

As I predicted, the finale of Restaurant Express ended with Seonkyoung being declared the winner! It was a strong finale even if (to me at least) it seemed clear every step of the way that Seonkyoung would take the title—and the restaurant.

First she battled one-on-one against Jan to see who would get the chance to face Adam. Both needed to plate a signature dish and compose a menu for their Las Vegas restaurant. Robert was pretty unimpressed with Jan’s stuffed (and overcooked) pork chop, which she said wasn’t a dish you could find elsewhere on a steakhouse or buffet menu when it clearly was. Also, “Exquisite Comfort Food” as the name of your restaurant? Oh, Jan, I don’t think so. Meanwhile  Seonkyoung refined her original Asian-inspired menu concept to “Jayde” and presented a beautiful dish with grilled marinated octopus. Her one issue was pricing on her menu, but it wasn’t enough to keep her from defeating Jan.

So Adam and Seonkyoung both were given $5,000 and 48 hours to open their test restaurant space. They had to do everything from plan 8 dishes for their menu to choosing their kitchen staff, decor, and training the service staff. Adam decided to go American “small plates”—seriously, is anyone other than me completely tired of the small plates/tapas trend? (I’ve been over it since 2011.) Seonkyoung’s line chefs were impressed with her professionalism despite her lack of experience; Seonkyoung was not so impressed with Adam as she accused him of taking some of her ingredients during the final preparations. While Adam filled his restaurant quickly by aggressively going after diners, all the previous Restaurant Express contestants chose to dine at Seonkyoung’s restaurant except for Kimmy, who dined alone at Adam’s.

At the M Resort VIP table, they liked the concept of Adam’s American-themed menu and the prices were right, but it seemed most dishes fell short of their full potential. Seonkyoung’s menu again had some pricing issues but the food was spot-on and an Asian concept sounded like something they had already been considering for the resort. So at the end of the competition, Seonkyoung was declared the winner, and shown the space where her Jayde Fuzion  restaurant is planned for launch.

You can follow news about Jayde Fuzion at Eater, and also read a one-on-one with Seonkyoung at the Food Network official website. As it turns out, as of March 2014 Seonkyoung was no longer at Jayde Fuzion, and the restaurant is continuing with a new head chef.