Andy Warhol was a freelance graphic designer long before he become one of the greatest pop culture artists and icons of the 20th century. His vintage LP cover designs are now in great demand. 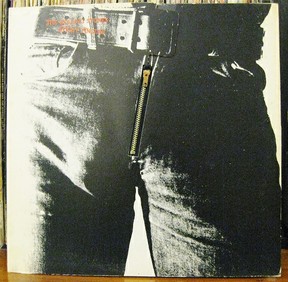 Andy Warhol album covers? Have you ever wondered what some of your old Warhol covers might be worth? The Andy Warhol Catalog Raisonne is the most exhaustive resource I have run across on the topic.

Maybe you still have The Rolling Stones Sticky Fingers album, or possibly the Velvet Underground and Nico, the one with the banana on the cover?

Warhol covers have exploded in price on eBay. I fear early in my record collecting days, I may have missed some of the more obscure covers, not even knowing it was a Warhol cover. I probably passed right over some of those mid 50’s covers and didn’t even realize it.

*Photo Credit: Sticky Fingers LP cover, from my own collection.
Other photos used with permission via Amazon.com or others from my collection.*

Jazz guitarist Kenny Burrell’s Blue Note Record from 1958 has a Warhol cover that shows a style closer to what I would envision as an Andy Warhol. 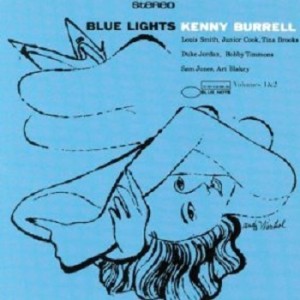 I mentioned in the introduction, these Blue Notes Carry a premium value from Blue Note Record Collectors in general, It is hard to tell exactly how much the Warhol effect drives the price of this particular record.

It is not uncommon for an original first pressing Blue Note from this era to fetch 4 figures any way, but one way to gauge the value is.

When you compare mid 70’s pressings, of “Blue Lights” to other mid 70’s pressing of different Blue Note titles from the same time period, you can see a dramatic difference, instead of 20 dollars, you might have to pay 50 dollars.

The Warhol effect on the Blue Notes isn’t that great when considering mint vinyl copies, but if you are only interested in the cover, maybe one of the cheaper mid 70’s issues will work. That is actually where the mark up value of the Warhol name is most felt, as typically a 70’s re-issue would only set you back 20-40 dollars for re-issues 50’s Blue Note. 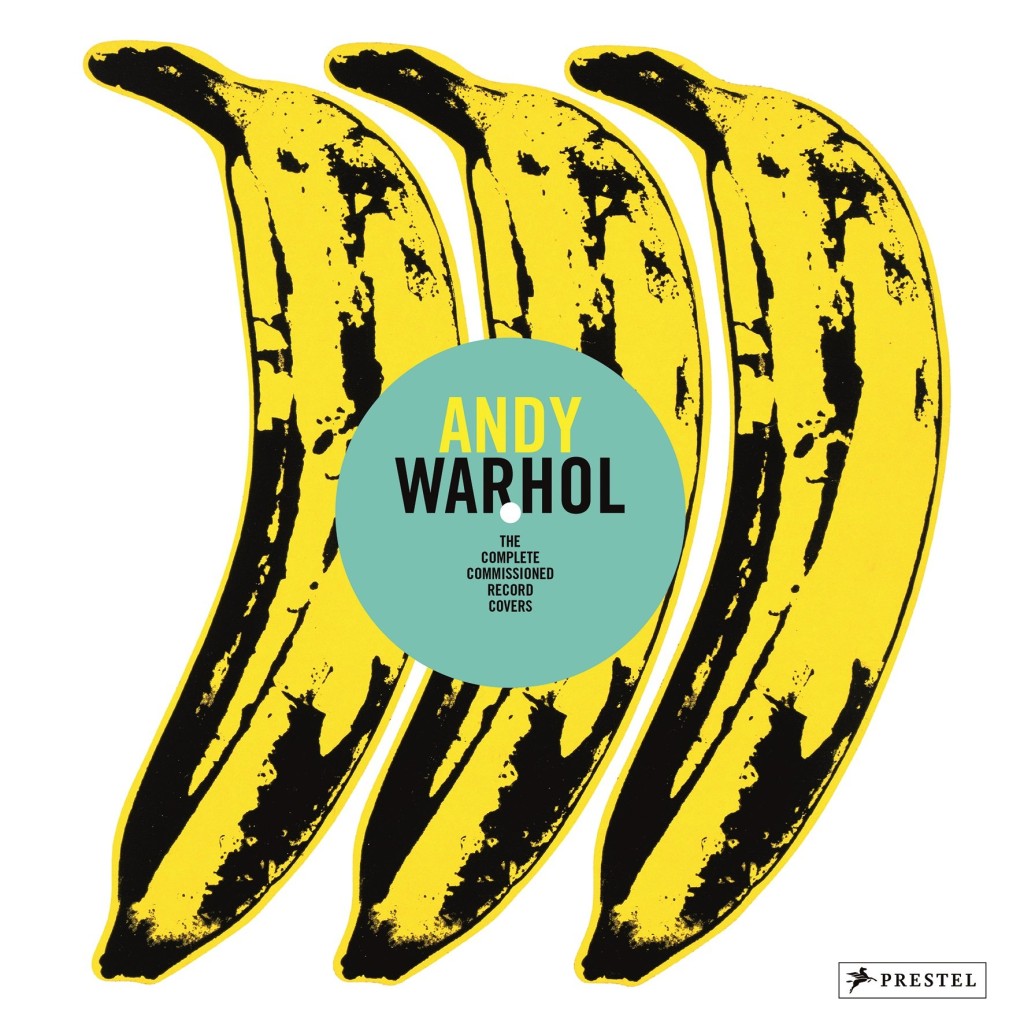 I’m still Swingin’, an aptly titled jazz album from trumpeter Joe Newman in the year 1955. The cover features just a basic drawing from Warhol. Certainly nothing here that would make me think about the future pop i 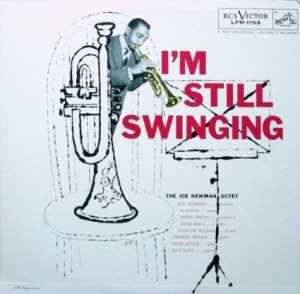 The album cover is a period piece in the style that the record company was looking for him to create.

The music on this session is fantastic, and I’m Still Swingin’ can easily bring $200 or more for a top copy if you find a Joe Newman aficionado.

I highly recommend the session to you or bop influenced swing fans. It’s a shame that if you get the music on vinyl you have to pay the Warhol premium, typically a Joe Newman 50’s record would bring half of the value of this particular copy.

As far as I can tell, this cover of a Carlos Chavez album cover known as A Program of Mexican Music is the first cover Warhol did. Presumably right after his move from Pittsburgh to New York, Warhol would have been only 21 years old at the time of this drawing. 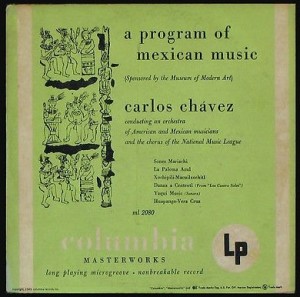 you can find this cover in 3 other color variations, light blue, yellow and olive-green. Imagine having all four of the variations framed?

It will not be cheap, even lesser condition covers with writing, tape, and or heavy soiling can bring a cool $1,000, high quality copies can fetch upwards of $3,000.

Typically when you talk about the vintage vinyl record and cover market, condition is of the utmost importance, but Warhol covers seem to be immune to this.

I have recently noticed some of the earliest of Warhol covers selling at 75% or better of Mint quality, fact is, these covers are in high demand, and I presume a worn copy is better than no copy to most.

I am not even sure if a buyer would even need the record inside. on a personal note, I have run into this cover before, at the time, I didn’t realize it was a Warhol. .99 cents! oh my god, what a bummer missing out on that killer thrift store find.

The Velvet Underground & Nico from 1967 is where mass counterculture marketing reached it’s apex. The genius of this album can not be underestimated, or Warhol’s role in it. 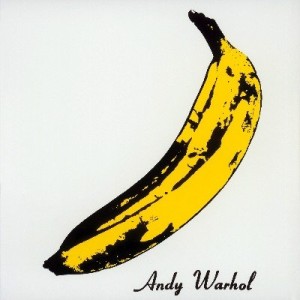 The Velvet Underground were the house band at Warhol’s studio “The Factory”, and his genius was allowing the band to be themselves, he did not force them into any particular style or sound, though one would have to surmise that the band was influenced by him.

The album cover for the Velvet Underground and Nico is its self an iconic figure within this 1960’s counterculture.

The original cover featured only a banana on the cover, with a sticker that said “peel slowly and see”. When you peeled the banana you would see a flesh-colored banana, or for those in the know, “shockingly pink” more appropriately.

This original pressing is one the rarest and highly sought after covers within art or rock. A special machine was needed to make the banana covers, and due to the expense, all pressings after did not feature the sticker.

Actor Eric Emerson threatened a lawsuit when his image was used on the back cover, as a result, further copies had the actor airbrushed out, this also adds to the collectible nature of the original covers. With so many variations, much care needs to be taken, to ensure you have an original.

Sticky Fingers is my personal favorite Stones album music wise. The music is timeless, the album cover with actual working zipper, and a mock belt, that would reveal a man’s briefs with a man in them might lack taste, but sure was an up yours to the 1971 establishment crowd.

That man’s crotch photographed was not Mick Jagger by the way, it was likely one of several male models who posed for a Warhol shoot. Warhol stated that Jagger was not among them.

Original pressings of Sticky Fingers with the working zipper are highly collectible and quite plentiful, a top condition original copy can be had for as little as 50 dollars.

Sticky Fingers also was the first Stones album to feature the “Tongue and Lips image”, Andy Warhol had NOTHING to do with that logo’s creation, as is sometimes erroneously reported.

Emotions in Motion is a Warhol cover you don’t hear much about, and Squier is someone you never hear about at all anymore. You can find this one on eBay for a few dollars. 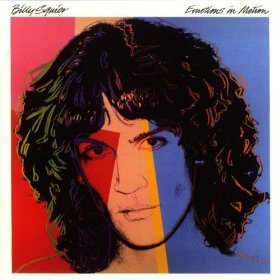 This is the album that had the massive hit, “Every Body Wants You”:  The album cover is still a Warhol and I believe a completest would want it in their own collection.

Andy Warhol would be gone just 5 years later, It seemed like every music artist was having a Warhol cover done for them by this time.

In my opinion, this sort of over saturates this style of Warhol cover art, and they don’t quite have the collector appeal as earlier groundbreaking Warhol styles.

I must admit I am not the biggest fan of the iconic Warhol art, though it has grown on me as I age. I have always been drawn to the impressionism of the Monet or Pissarro  and the Abstract Expressionism of the Jackson Pollock variety.

When I researched this article I was amazed at the Jazz covers he did, those Kenny Burrell Blue Note covers are some of my favorite. So once again, learning just a little more about an artist, be it music or paint, I learn to appreciate them more than I otherwise would.

All photos used with permission via Amazon.com or are photos of albums from my own collection.