Ten Lesser-Known Album Tracks by The Police Worth Checking Out 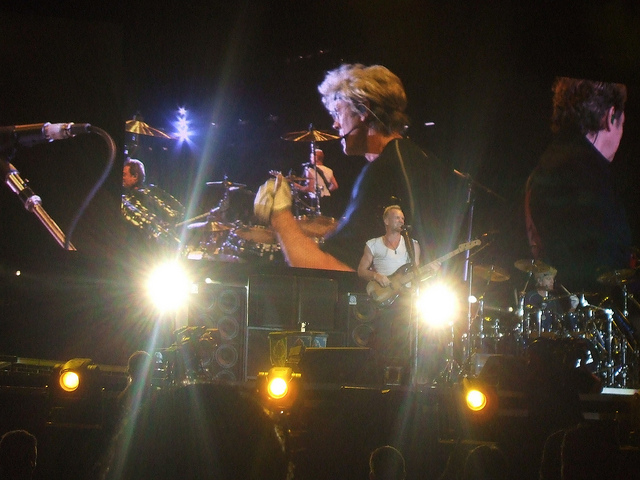 The Police onstage at Giants Stadium, August 5 2007. Photograph by the author, sockii.

The pop-rock band The Police are known to most music lovers for their classic hits including “Roxanne,” “Every Breath You Take,” “Walking on the Moon” and “Message in a Bottle.” But if the only Police music you’ve listened to are their singles and greatest hits, you’re missing out on some great tunes. Although The Police only released five studio albums between 1978 – 1983, on those albums are many amazing songs you may have never heard. To really appreciate The Police, you must go beyond their popular singles and check out some of their “deep album” tracks. Singer/bassist Sting, drummer Stewart Copeland, and guitarist Andy Summers combined skilled musicianship and superior songwriting to create catchy, intelligent popular music at a time when punk and new wave placed style over substance, and attitude over technical abilities.

The following is my list of the Top 10 “deep album” tracks (non-singles) recorded and released by The Police. Have a listen to these songs and hear for yourself why The Police were such a great band, and why their popularity, legacy and influence continues through to today.

This moody track is from The Police’s Zenyatta Mondatta, the 1980 album which The Police themselves claim they are not especially fond of in retrospect. Blaming a rushed recording session and record company pressure for more big hits, band members have often been quoted as saying they consider the material on this, their third record, weak. Yet fans cite many of the album’s tracks as their favorites, including “Shadows in the Rain.” This slow, atmospheric song features echo-heavy, distant-sounding vocals from Sting, and guitar work by Andy Summers that reminds one of the kind of psychedelic space jams Pink Floyd and similar prog-rock acts popularized in the 60s and 70s. It’s an unusual sound for The Police, but it works. Interestingly, Sting would re-record the track for his solo debut album, The Dream of the Blue Turtles, turning it into a faster paced jazz-fusion number. I greatly prefer this version, where the music fits the somber mood of the lyrics much more strongly.

Early on, The Police were characterized as a “white reggae” band, which was not especially accurate. While hits such as “Roxanne” and “Can’t Stand Losing You” incorporated some reggae stylings and rhythms, it was only one genre of music they played with to create their own unique sound. “One World (Not Three)” from 1981’s Ghost in the Machine, however, is pure reggae and one of their lesser-known gems. The influence of The Police’s recording of this album on the Caribbean island Montserrat is evident in this song’s bright horns, and reggae bass line and drums. Stewart Copeland pulls out all the stops here and this song is one of my favorite examples of his amazing drumming skills and unique personality.

8. “When the World is Running Down, You Make the Best of What’s Still Around”

This track from Zenyatta Mondatta perfectly exemplifies The Police’s stated aesthetic of “Less is More.” It’s deceptively simple, with a repetitive bassline and clean, simple drumbeat. But its steady groove is locked in solidly, creating a spacious atmosphere for Sting’s vocals and Andy Summers guitar wizardry. In many ways it is a quintessential Police track, instantly recognizable as the kind of sound only this particular trio of musicians could create.

This odd little track from 1979’s Reggatta de Blanc is one of my favorite Stewart Copeland-penned songs in The Police’s repertoire. Based on a series of piano chords Copeland wrote for a college composition class, it features awkwardly sweet lyrics about being self-conscious and shy around a romantic crush. Anyone who has ever admired another from afar, afraid to act on their feelings and riddled with self-doubt, should appreciate and relate to this song’s lyrics:

“I never noticed the size of my feet

Until I kicked you in the shins

Will you ever forgive me

Never played live by The Police, Stewart Copeland has performed some unique reworked versions of the song in later live performances:

“Peanuts” is a raucous, high-speed number from The Police’s debut album, 1978’s Outlandos d’Amour. Police folklore states that the song was written to mock and make fun of singer Rod Stewart, but its lyrics about a musical “fallen hero” could apply to any bloated rock star of the 1970s whom the punk movement sought to dethrone. The Police especially rocked out on this number in live performances, turning it into an extended, frenzied jam that showcased their musical abilities beyond what punk would normally allow.

This closing track to 1983’s Synchronicity is an oddity amidst the album’s rich atmospheric and fully orchestrated sound. Originally intended to just be the B-side of “Every Breath You Take,” it was eventually included on the cassette and cd releases of Synchronicity as well. “Murder by Numbers” opens with pure simplicity, just Sting’s voice cooling singing about killing over a complex rhythm set by Copeland – a drum part some consider one of his most challenging. After the first verse, bass and guitar enter the mix for a jazzy number all about murder and getting away with the crime. Story has it the song was recorded very quickly and with little rehearsal, which could account for its raw, stark, and intensely immediate sound.

“Omegaman” from Ghost in the Machine is easily Andy Summers best contribution to The Police’s collection of songs. This driving rock number full of heavy guitarwork was actually favored by record company executives to be the first single from Ghost, according to Summers in his autobiography “One Train Later.” But Sting reportedly would not hear of a song he didn’t write being released as a single, so it never happened.

The title track from The Police’s second album is truly one of their greatest deep album cuts. A near instrumental – the only vocals being Sting’s enthusiastic “e-yo’s” and “Cha!’s” – the song illustrates the band’s tight musicianship beautifully. It’s a powerful number with its throbbing baseline, delayed and echoing drum rhythms and sonorous guitar. The song especially shines in the band’s live performances, where it typically was played as part of an extended, jam version of “Can’t Stand Losing You” that always brought crowds to their feet.

“Darkness” closes out Ghost in the Machine in a haunting, mesmerizing fashion, with perhaps the best Police track ever penned by Stewart Copeland. A song Copeland describes as being about “vertigo,” the brilliant lyrics capture self-doubt and the dizziness of success succinctly and perfectly:

“I could make a mark if it weren’t so dark

I could be replaced by any bright spark

But darkness makes me fumble

For a key to a door that’s wide open…”

The music also adds to the dizzying mood, awash with cymbals and a repetitive, meditative piano melody. It’s a somber and thoughtful end to the album, perhaps hinting at the unease and discomfort within the band at that time as well.

It’s a fan-favorite song to many, some of whom have been inspired enough to create their own original music videos for the song:

The best of The Police’s album tracks is, in my opinion, “Driven To Tears” from Zenyatta Mondatta. What makes this song stand out is that it is a perfect showcase of Sting, Stewart and Andy’s talents and contributions to the band. Sting goes beyond stories of love and romance here and makes his first real political statements in the lyrics to this song, which supposedly were inspired by the poverty and unrest he observed while touring India and other parts of the world with the band. Andy Summers delivers a scorching, atonal guitar solo while Copeland pulls out all the stops in his drumming arsenal, particularly with some terrifically expressive ride cymbal work.

With these tracks in mind, I hope you will take the opportunity to explore more of The Police’s music beyond their hits and popular numbers. I think you’ll be pleasantly surprised by what you discover.

This article was originally published at Associated Content on April 26, 2010.