The Who in Review: The “Quadrophenia and More” Tour 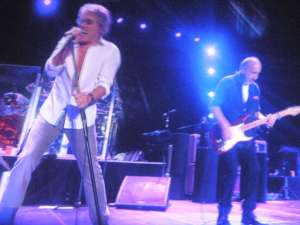 Pete Townshend and Roger Daltrey on stage, April 22 2013. All concert photos on this page are by the author, sockii.

(This review was originally published at Zujava in February 2013.)

Quadrophenia has long been my favorite album by The Who, so I was thrilled to hear they would be taking it on the road again for the “Quadrophenia and More” Tour in 2012-2013. However, many expressed concerns over whether singer Roger Daltrey’s voice would be up for the challenge of this demanding piece, so I decided to wait until reviews came in from the early performances before spending good money on tickets.

It ended up taking until near the very end of their North American tour before I would end up seeing the show, on February 22, 2013 at Boardwalk Hall in Atlantic City, New Jersey. Boardwalk Hall is actually one of my favorite arena venues to see large rock concerts, as for some reason the acoustics are surprisingly good and the sound is, as my partner David always puts it, “just banging”.

The Who’s “Quadrophenia and More” show was no exception. I’m so glad I went because it ended up being one of the best rock concerts I’ve been to in quite some time, and well worth the ticket price.

“Ill fitting clothes
I blend in the crowd,
Fingers so clumsy
Voice too loud.

This was actually my third time seeing The Who perform Quadrophenia in its entirety; I was fortunate enough to see them twice on their 1996-1997 World Tour, which were also my first times ever seeing The Who in concert.

I have to say that to my memory I found this current production a much more satisfying and tight performance of the rock opera. In ’96, Townshend was only playing electric guitar for a small portion of the show due to his hearing difficulties, and the additions of Gary Glitter as “The Godfather” and Billy Idol as the “Ace Face” for the live show didn’t “do it” for me. Here, the music felt much more pure and true to the original album, less gimmicky without the addition of special guests and other artists. The band was tight and well-rehearsed by this stage of the tour – although David said he thought Roger looked a little “tired” at points during the show.

This performance was – at least – my fifth time seeing The Who live, and I have to say I think it was definitely my favorite Who show to date. Townshend was in great form; he seemed quite happy to see a capacity crowd in Atlantic City and thanked everyone for being there, despite these difficult financial times and the devastation of the Jersey Shore last year due to Hurricane Sandy. (Indeed, it was our first time driving to the Shore since Sandy and it was sobering seeing all the downed trees and destruction still throughout the Pine Barrens along the way.) 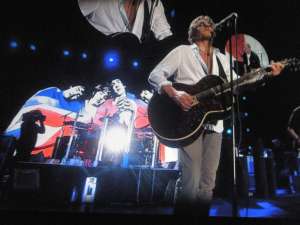 For the most part I felt Daltrey carried off the vocals well, though he struggled with some notes and at a few challenging points it was difficult to tell how much he was singing live versus miming/adding to pre-recorded vocals. He also seemed to lose his monitors during the encore section performance of “Who Are You” – unfortunately right before the end climax of the song.

Drummer Zak Starkey proved once again that he is just about the only drummer who could even attempt to fill the late, great Keith Moon’s shoes. Indeed Keith’s, and John Entwistle’s, ghosts loomed prominently over the entire show and were paid dear tribute to throughout. Both were shown repeatedly in the excellently-edited montage videos during the concert, and in their current version of “5:15” Zak performs a drum solo/challenge along with a recording of John jamming it out on bass – a moment which really got the Atlantic City crowd roaring and cheering with applause.

Keith’s moment of tribute comes in “Bell Boy”, where his vocals and vintage footage of Keith singing his part of the song are intermixed with the live show; it’s an emotional moment as Roger turns from the audience to focus on Keith’s image on screen, ending the song in salute. While these moments could have seem corny or even exploitative, I felt it added a real depth of emotion to the show and was a fine recognition of both John and Keith (it’s honestly making me emotional just remembering these parts of the show the day after.) 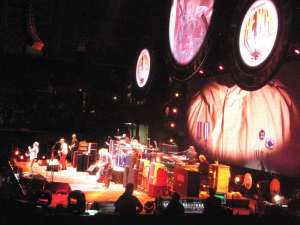 “Bell Boy” performed live by The Who.

The rest of the Quadrophenia touring band was equally impressive. On bass guitar was Pino Palladino, who has been working with The Who since the death of John Entwistle; Pete’s younger brother Simon Townshend on guitar and vocals, John Coury and Loren Gold on keyboards and J. Greg Miller & Reggie Grisham on horns.

As mentioned, the visual effects and editing used for this production of Quadrophenia were truly exceptional. Besides a large video screen behind the band, three circular screens up high added to the visuals (rather like the headlights of Jimmy’s beloved scooter), and side screens showed close-ups of the band in performance throughout.

The main screen footage helped create the atmosphere of 1960s London and Brighton with excellent archival footage: the Mods, the Rockers, the beach, war-ravaged buildings and of course vintage Who performances. The video footage was used for incredible emotional effect during the extended instrumental “The Rock”, which helped bring Quadrophenia to the modern day via a whirlwind tour of world history and events of the past 40 years: the Vietnam War; Nixon; punk rock; the deaths of Keith Moon, John Lennon, Princess Diana; the fall of the Berlin Wall; Tiananmen Square; the Gulf War; September 11 and the Occupy Movement.

This entire sequence was done so perfectly with the live music, I had goosebumps. Given I was born in 1972 and am now 40 years old myself, it truly was like watching a time capsule of my world, my lifetime, in just a few minutes. Indeed, when the footage of the World Trade Center attack hit the screen just as the motif of “Love Reign O’er Me” began, the entire audience rose to its feet, not cheering in “appreciation” but in respect and memory for a tragedy which struck far too close to home for many of us here in the Northeastern United States.

After the Quadrophenia set

After the completion of the Quadrophenia set, the band hardly took any break at all before launching in to the “More” section of the show. Performed the night of the Atlantic City concert, it was basically a highlight reel of some of the band’s greatest hits: “Who Are You”, “Behind Blue Eyes”, “Pinball Wizard”, “Baba O’Riley”, “Won’t Get Fooled Again” and “Tea and Theatre” – the last of which closed out the show in typical Who fashion these days, just Roger and Pete on stage together. It was a solid set, if lacking in any surprises or rare tracks. But then I suppose for the more casual Who fans who did not know “Quadrophenia” inside and out it was a chance to get their favorite hits in.

The show ran just under 2 hours and 20 minutes in length, with The Who hitting the stage promptly at 8:30pm. We did not arrive early enough to see their opening band, Vintage Trouble, but all reports indicate they are well worth checking out if you have the chance.

The Who perform “Baba O’Riley”

I wanted to capture one full song from the show on video, just to give a taste of the performance to others – and show off our great seats! I was fortunate to find a pair of “front-row” side stage tickets at the last minute on StubHub. These seats gave us a great view of the performance and the sound quality was still top-notch (unlike some venues where sitting on the sides can make a show sound very muddy.)

CHECK PRICEQuadrophenia: Live in London
Didn’t get the chance to see the tour in person? Don’t worry; a BluRay/DVD release is scheduled for June 10, 2014. The performance was recorded July 8, 2013 at London’s famous Wembley Arena and this recording is sure to be a fabulous “memento” of the Quadrophenia and More Tour.