The Tondo is a unique form of “Circular Art” and painting. Learn more about the history of the Tondo and how it is still used in artistic design today.

What is a Tondo? 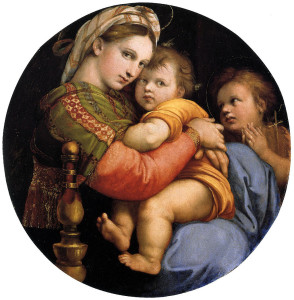 “Tondo” is a term used in art to describe paintings, sculptures and reliefs which are round, or circular. Circular canvases, panels and sculptures are quite unusual, and became especially popular in 15th Century Renaissance Italy.

Quite a few famous, noteworthy works of art are tondos (or tondi, either term is used) and it is a format that provides unique challenges to an artist, even today. You can read on to see examples of famous artworks in the tondo format, and also the history of the tondo from Ancient Greece to the modern day.

The History of the Tondo

One can find tondi in art going back to Ancient Greek times. Vases were often decorated with round paintings, and the broad drinking cup known as the Kylix also was popularly decorated with a round image on the inside of its bowl. 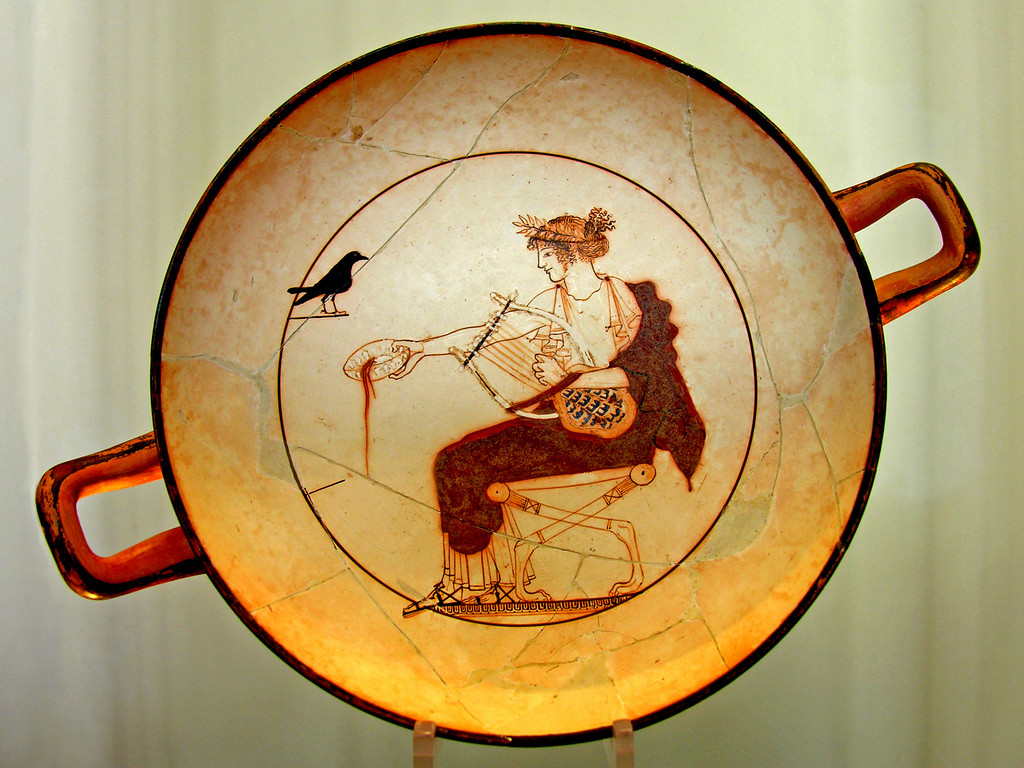 The round painting – or relief – was revived as a popular format in Renaissance Italy. Andrea della Robbia and his family produced many round works of glazed and painted terra cotta artwork, often used to decorate frescoed walls (many can be seen today in Florence, at the “Hospital of the Innocents”). Sandro Botticelli produced numerous paintings in the tondi format, and Michelangelo produced both round sculptural reliefs and one famous painting, the Doni Tondo – the only completed panel painting by the artist which is known to survive today. 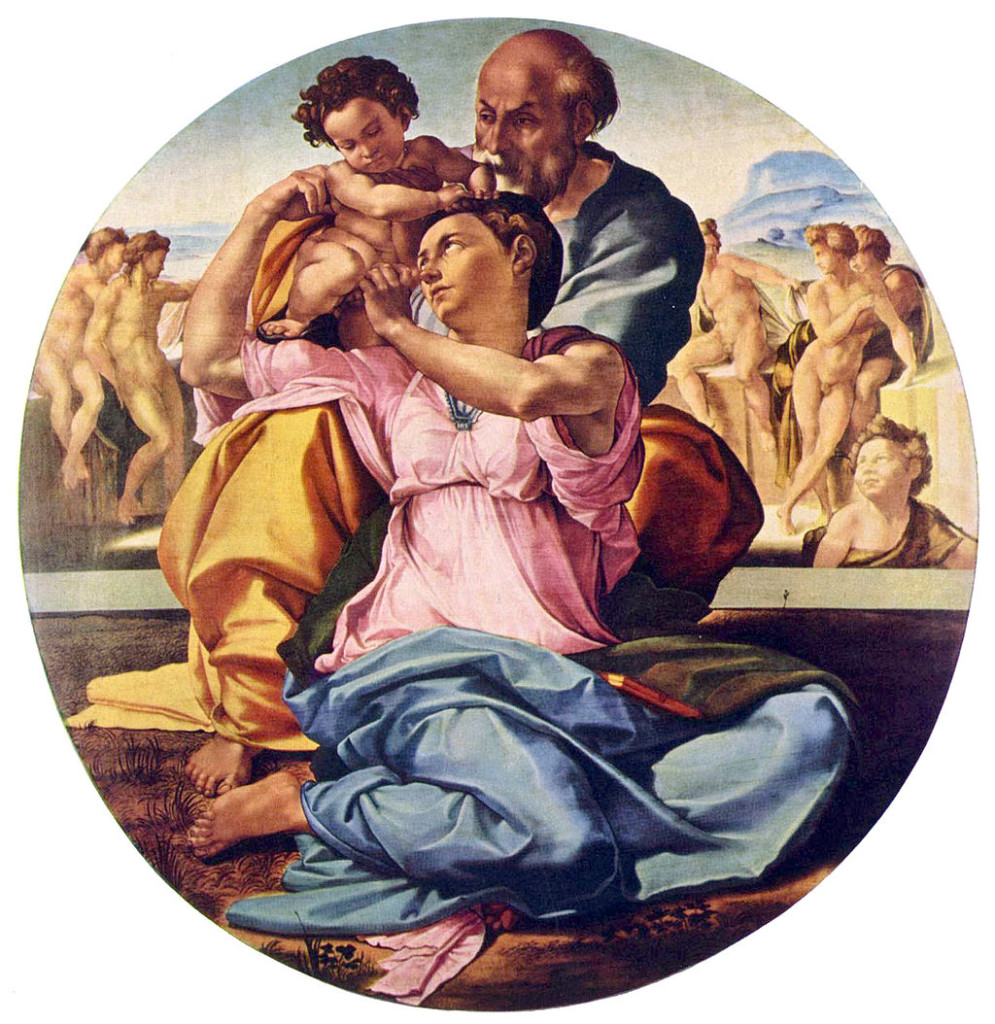 Michelangelo is primarily known for his sculptural work, such as his statue of David, and his frescoes in the Sistine Chapel. Therefore this painted panel, now hanging in the Uffizi Museum in Florence, is a rarity indeed – and not just because it is painted on a circular panel!

The Doni Tondo was likely painted to commemorate the wedding of Agnolo Doni to Maddalena Strozzi, and the tondo was often associated with domestic ideas in Renaissance Italy. While the figures of the Holy Family in the foreground of this work are familiar, scholars have pondered the meaning of the male nude figures in the background for centuries.

As with much Renaissance art, there is much more going on in this painting beyond the surface image, even in the flowers and plants chosen for inclusion in the work.

Typically to be considered a true tondo, the work must be fairly large – at least two feet in diameter for painted works – to distinguish it from round miniature paintings which were popular in England and elsewhere. One aspect of the tondo which differentiates itself from more standard rectangular works is the absence of or compression of the background elements: the focus is generally solely on the figures in the center of the circular composition.

Modern and contemporary artists have continued to create works in the tondo format as well, using the circular format as a dynamic format for geometric and minimalistic works, responding to the shape and challenges of the round canvas or panel in exciting ways. A 2012 exhibit celebrated 18 contemporary artists who have embraced the tondo format and keep it alive and exciting in the art world today.

References and to learn more: 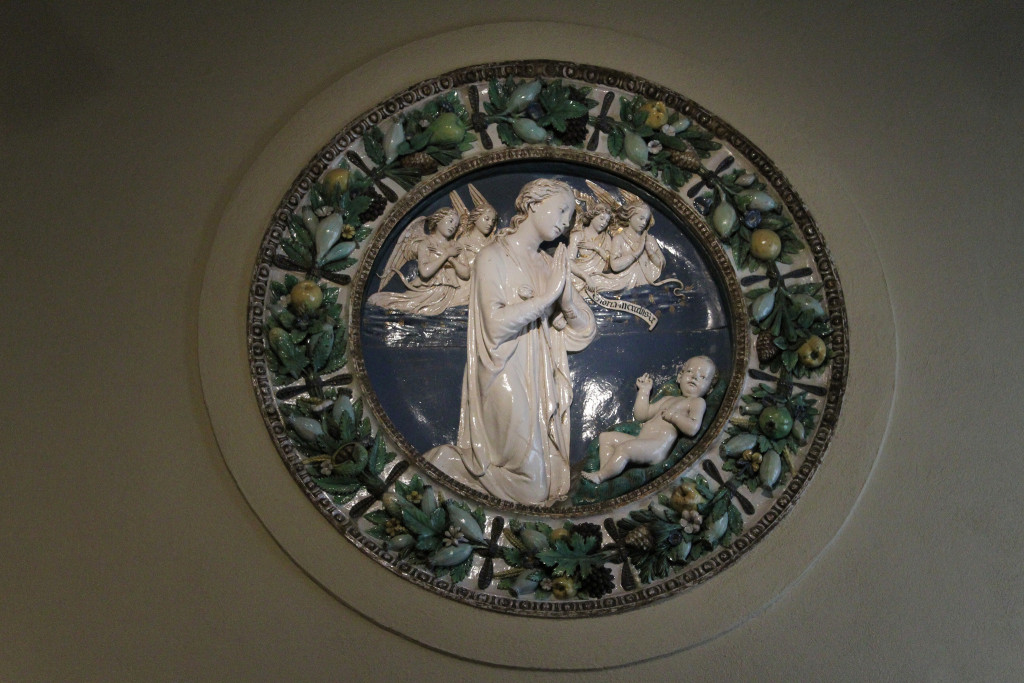 Virgin and Angels Adoring the Christ Child by Luca Della Robbia. On display at the Philadelphia Museum of Art. Source: jcapaldi on Flickr, licensed under Creative Commons Attribution 2.0 Generic

Throughout Italy, one finds many examples of the Della Robbia family’s beautiful glazed terra cotta. Many of these pieces are circular in design: tondos that spotlight the Madonna and Child, family arms and guild insignias, and decorative works for tombs, churches and ceiling roundels.

Often blue and white in color with green and/or yellow highlights, they are distinctive and incredibly valuable today.

You’ll find many tourist shops selling small modern terra cotta copies as well, so you can bring these designs home with you. 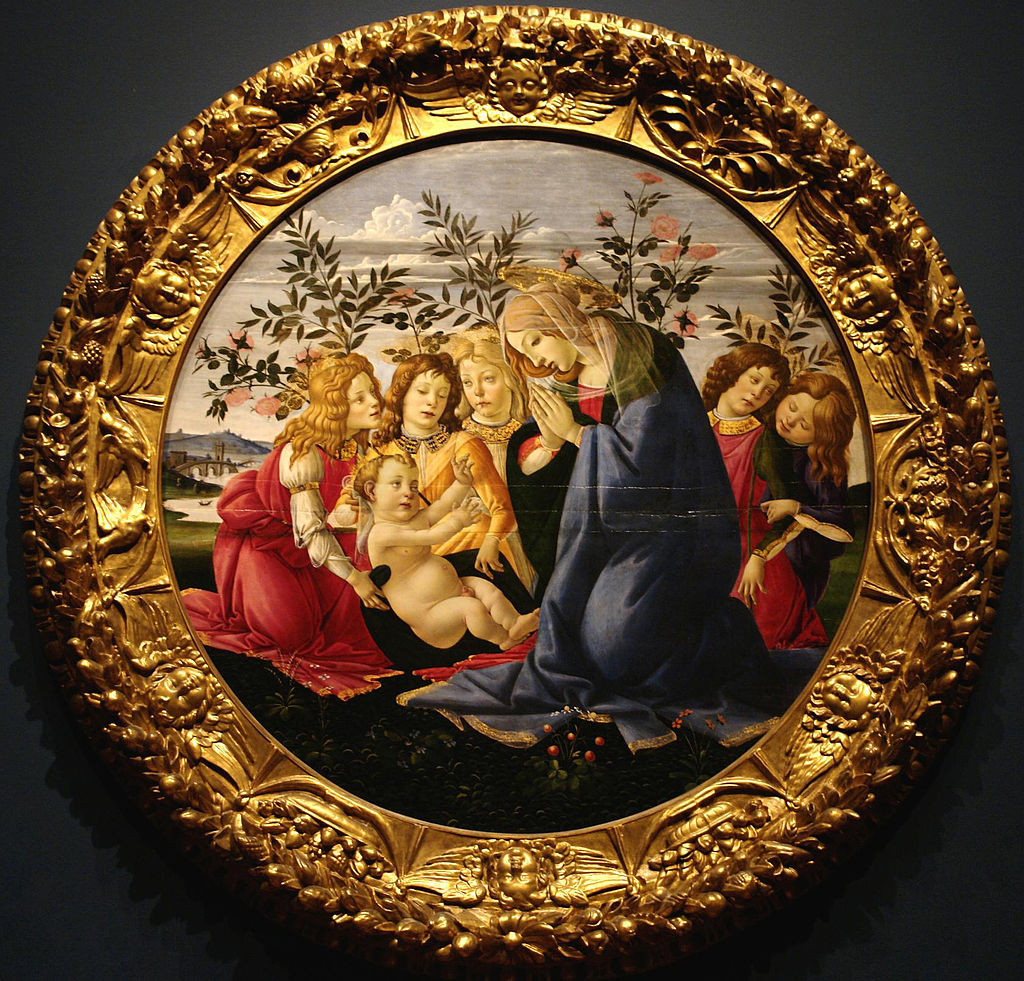 Madonna Adoring the Child with Five Angels by Sandro Botticelli, on view at the Baltimore Museum of Art. Source: Wikimedia Commons

Sandro Botticelli is one of the most famous painters of the early Italian Renaissance, the master behind such famous works as The Birth of Venus. Botticelli painted numerous tondo works. He was apprenticed to Fra Filippo Lippi with whom he developed and refined his style of very detailed, intimate paintings.

After his death in 1510, his work was quite “forgotten” for centuries until a renewed appreciation for his paintings came about in the early 20th century.

The “Alba Madonna” and “Madonna della Seggiola” by Raphael 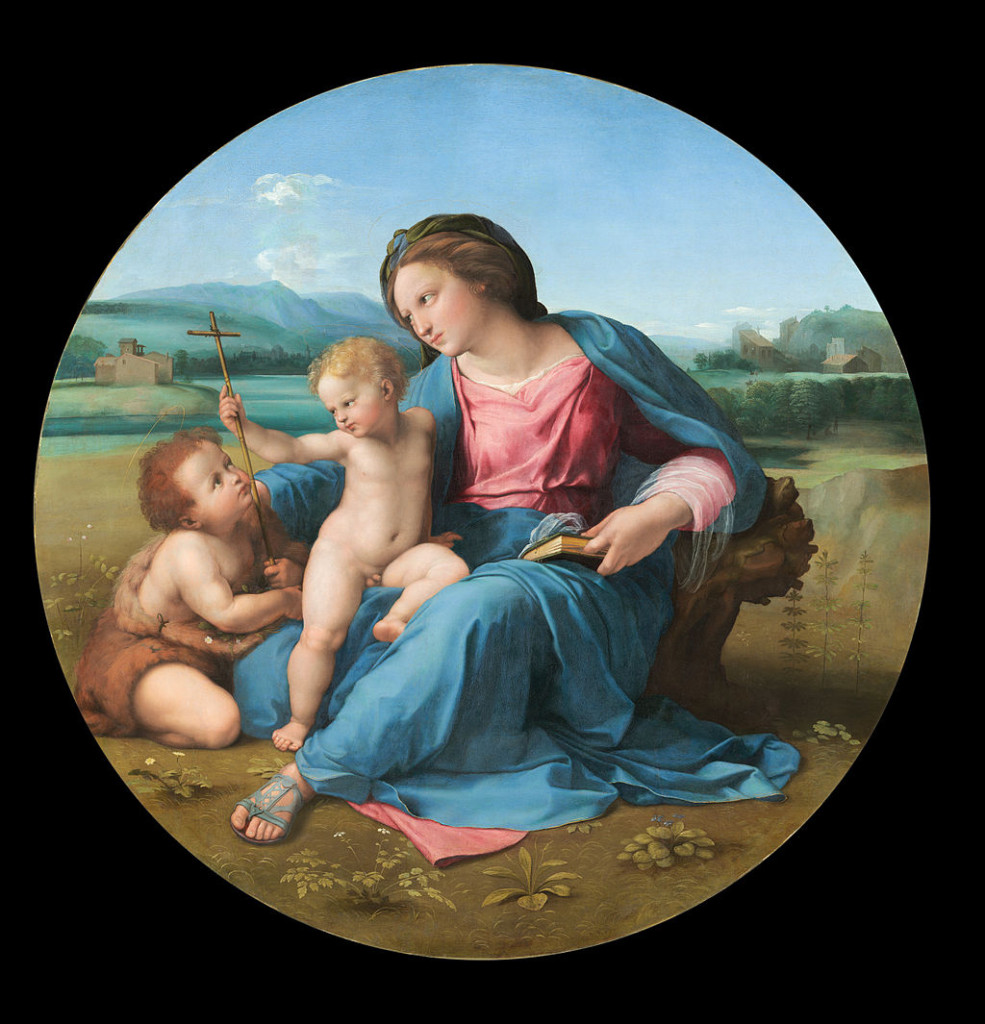 Raphael, “The Alba Madonna”. On display at the National Gallery of Art. Source: Wikimedia Commons

Raffaello Sanzio da Urbino – often known simply as Raphael or Raffael – was one of the true masters of High Renaissance painting in Italy – considered along with Da Vinci and Michelangelo as the one of the trinity of true Renaissance ideals.

Although he died young, at just 37, he had a very large workshop and left behind a tremendous body of work. That said, because he often left his workshop to complete paintings from his sketches and designs, their quality was not always up to that from his early years in Rome. The “Alba Madonna” shown here is from that Roman time period and showcases his mastery of design, balance and beautiful painterly execution. Sadly the painting has suffered through the years; when the original panel was showing signs of severe splitting, it was transferred to canvas and some of the landscape background was damaged.

The “Madonna della Seggiola” shown at the beginning of this page was also from Raphael’s Roman years. This famous work – now on display in the Pitti Palace in Florence – is notable for showing a softness in color and composition more like that of Venetian master artist Titian than the hard geometrical style of previous Florentine Renaissance work.