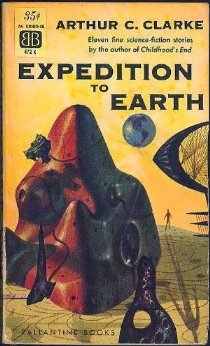 As a young child growing up in the 1970s, a great deal of my interest in reading and literature shaped by the large collection of 50s-60s era-paperbacks in our household. My grandfather worked as a staff physician at a facility with a library that often discarded old paperbacks, and as an avid reader he would bring home as many as he could, no matter what the genre. Many of those were science fiction novels, some trashy pulp adventures but others classics of the genre by Robert Heinlein, Isaac Asimov, Frederik Pohl, and Philip K. Dick.

I recall that even as a child, I was always drawn to these science fiction books that piled up in our house, typically because of the fantastical, out-of-this-world artwork on their covers. It would be many years before I realized how many of those book covers were the work of artist/illustrator Richard M. Powers, today considered one of the most important science fiction artists of the past century. What drew me to his artwork was its surreal, utterly unique and abstract nature; instead of illustrating specific scenes and characters as so many book covers did, Powers artwork evoked alien worlds, surreal environments, and mysterious spaces and cityscapes that left one to wonder and speculate what they could be about.

The qualities of Powers’ artwork are many of the same that make Yves Tanguy my favorite surrealist painter. Indeed, Powers was admittedly influenced by Tanguy and his surrealist, modern art counterparts such as Klee, Miro, Picasso and Gorky. Many would say that Richard Powers’ art should indeed be ranked among that of these 20th Century modern masters, yet because of its “commercial” nature his work is not given the same level of respect, as an illustrator, that work by “pure artists” of that time would be given.

This page is just my small tribute to Richard M. Powers, one of my personal favorite artists who has certainly had an influence and impact on my own painting style through the years.

Sometimes you can find old, collectible paperbacks featuring Powers’ artwork for sale on Amazon – or you can add them to your want list if you are a collector. 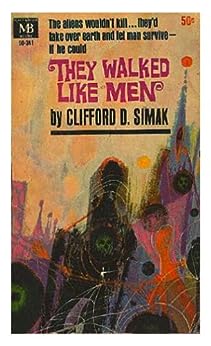 They Walked Like Men by Clifford D. SimakCHECK PRICE 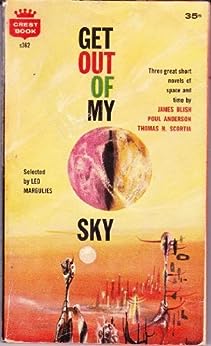 Get Out of My Sky by James Blish , Poul Anderson , Thomas N. ScortiaCHECK PRICE

A brief introduction to the artist and his work 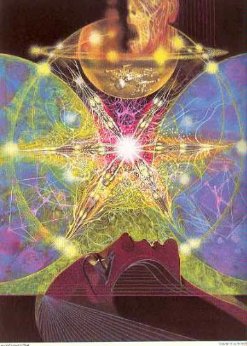 Richard Michael Gorman Powers was born on February 24, 1921 in Chicago to an Irish Catholic mother and father. His father, however, abandoned his wife and young child early on, so Richard was raised largely by his mother and her sister. An uncle introduced him to art and sketching at the age of eleven, and eventually he would commit himself to a career in the arts. He studied at several schools in the Chicago area both before and after World War II. He met his wife Evelyn during those war years and after being discharged in 1946 would continue both art and writing, unsure of which creative path might “break” for him first.

In the late 40s and early 50s, Powers produced book and magazine covers for several different publishers in the Science Fiction, Western and Juvenile paperback genres. But his big break would come when he began working with the newly created Ballantine Books in 1952, becoming an unofficial “art director” for the publisher. Ballantine wanted Powers to produce covers with a “new look” to match their line of adult science fiction publications, something to set them apart from the more pulp-magazine tradition and style which was popular at the time. He was given almost free-reign to produce abstract and surreal artwork, where symbols replaced clearly illustrated spaceships, and unearthly landscapes invoked moods familiar and totally unreal, dreamlike, and perhaps disturbing. His work could easily be compared – and stand up against – that of major surrealists artists including Yves Tanguy, Max Ernst, Salvador Dali, and Roberto Matta.

“…like Magritte, Powers strove to evoke the mystery inherent in familiar objects, transformed in such a way to destroy their harmony with our naive or sophisticated notions.” – J.H. Matthews, Eight Painters: The Surrealist Context (1982), Syracuse University Press, Syracuse.

Powers’ work would be hugely influential on the field, with other artists soon imitating his style or being influenced by it – but none of course could ever quite match it. He worked in a mixture of materials and techniques, including acrylics, oil and collage. When his wife Evelyn died in 1966, his commercial output decreased and he concentrated more on fine art. He had one man shows at a gallery in New York and his work is now part of the permanent collection at the Museum of Modern Art in New York. In the 1970s he did return to book cover work albeit not as prolifically as before. Richard M. Powers died in 1996 at the age of 75, and was inducted into the Science Fiction Hall of Fame in 2008.

The Art of Richard Powers

The only book to explore his work and life in detail 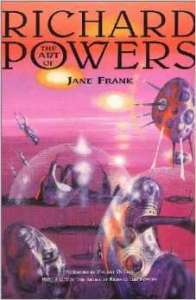 “The Art of Richard Powers” by Jane Frank. Buy it now at Amazon.

Those interested in learning more about Powers and seeing his artwork in detail absolutely must get a copy of this 2001 release from Paper Tiger. It features over 100 full color illustrations of his artwork and a checklist of the book covers which he illustrated, in case you are a collector wanting to track down them all!

Chapters of the book include “The Life”, “The Art”, “The World of fFlar”, and “In His Own Words” – An unpublished interview with Richard Powers. There is also a foreword by fellow science fiction artist Vincent Di Fate. All in all this is a lovely book and one I have looked through for inspiration in my own artwork numerous times.

“Powers” – Excerpts from the Album by Andy Partridge

Andy Partridge, founder and primary songwriter of the new wave band XTC, was also greatly inspired by the artwork of Richard M. Powers. In 2010, he released an album of “aural sculptures” called simply Powers, attempting to capture the sounds and atmospheres that Powers’ artwork invoked in his mind and imagination.

While the CD version was an extremely limited release, audio downloads of the twelve tracks are available currently from the APE Store.   The YouTube video below will give you a brief sampling of these “songs” and the artwork which has inspired them.

Online resources dedicated to Richard M. Powers and his artwork

Tributes to other artists I admire

Yves Tanguy – Surrealist Artist
Yves Tanguy (1900-1955) was a surrealist artist who beguiled and intrigued many with his unique and haunting images, paintings unlike those of any other artist….