I only recently discovered author Hugh Howey and his incredibly popular “Silo Saga” books, thanks to a recommendation from someone who knows my taste in science fiction. I downloaded the first title, Wool, based on the intriguing description—and the fact that it was a book with over 10,000 customer reviews, most of them extremely positive. You don’t see that very often, particularly with a self-published, independent title in a market flooded with such works (and many of them mediocre and badly in need of professional editing). But Wool ended up far exceeding all of my expectations and led me to immediately seek out and read the rest of this series and then dive into the author’s other books. If you haven’t discovered Hugh Howey yet yourself, then perhaps it’s time you should. 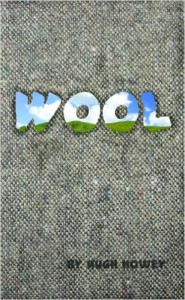 For a little background, Howey had previously worked as a yacht captain, roofer and audio technician before beginning this series in 2011. Wool began as a short stand-alone story, self-published using Amazon’s Kindle Direct Publishing system. Its incredible popularity (it was a #1 bestseller on Amazon and won a Best Indie Book Award in 2012) then led Howey to continue the story in four more “books”, now combined into the Wool Omnibus. The storyline was then completed in two more titles, Shift and Dust, all set within the same timeline and universe. 20th Century Fox has even bought the film rights to Wool, although production remains unknown. Personally I feel the series would be better suited to television development, something akin to Lost or The Walking Dead, but I’m not sure any adaptation could really capture the wonders and creativity of these books.

Howey’s initial short story Wool introduces readers to the unique, post-apocalyptic world of the Silo: a large, underground bunker of 144 levels where several thousand people live, work, and wonder about the world “outside”. All they see of that world is what’s projected to them via dust-covered video sensors that show a toxic, ruined wasteland lacking any signs of life.  The ultimate punishment for any resident of the Silo is to be sent outside for “cleaning”: expelled from the Silo for crimes or even expressed wishes to get out, wearing protective suits which only seem to keep them alive long enough to clean those outdoor sensors. One of the great unexplained mysteries is why every doomed individual takes the time to clean, even when they swear that they won’t before going outside.

Inside the Silo, life is tightly regulated and controlled—as it must be given their limited space and resources. For population control reasons, pregnancy and birth is only allowed through a lottery system. People work in jobs they have “shadowed” for since a young age, whether it is laboring in the farms to feed people,  shuffling belongings and supplies up and down the Silo’s staircase as a porter, or toiling down in the depths of mechanical to keep the Silo’s generator running. Status in the Silo society is very much based on whether one lives in the high levels, the mids, or the lower depths, and no one quite knows how life came to be like this. There has been an uprising in the past…or perhaps several of them. No one but the mysterious IT department on level 34 may know for sure. And questioning the past too much could lead one to be sent outside for cleaning… 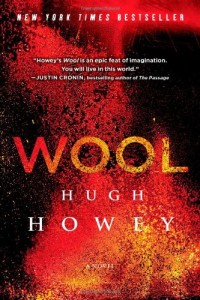 The Wool Omnibus, available at Amazon.

The first “Book” in Wool (the original short story) is told from the point of view of Holden, the Silo’s current Sheriff. He is awaiting his own appointment with the outside world after declaring he wanted to go outside. Some time before, his wife had gone mad and gone outside, perhaps after uncovering information she wasn’t supposed to know about past uprisings. Holden’s story stands well on its own with an unexpected yet excellent twist at the end, so it is no wonder that the reading public demanded more. Howey’s skill at creating this unique world is exceptional, particularly in how he brings us characters we immediately care about here and become involved in their sad and seemingly hopeless stories.

Book Two in Wool picks up the story with a new narrator: the current Mayor, Jahns, who must now appoint a new Sheriff. Her deputy Marnes has an unexpected pick for her to interview: a young mechanic named Juliette. To meet with her they must travel down from the upper levels to the very bottom of the Silo, giving us a more in depth look at what life is like in this strange artificial world. It also brings Jahns and Marnes into greater conflict with IT, who have their own choice for Sheriff and are none too happy with Jahns’ plans. This book sets up the conflict which will follow throughout the rest of Wool.

Juliette is a fascinating character and will become our main narrator for the rest of Wool—and one of our primary protagonists throughout the rest of the series. Estranged from her father, who delivers babies in the pediatric wing, Juliette is tough and hardened at a young age thanks to the death of her lover years before. She has no interest in leaving mechanical to become Sheriff, but circumstances give her little choice. In her new role, she starts investigating strange things about the Silo, things IT does not want anyone to know. Her life could be at risk as a series of deaths continue, but she could also come to change the lives of all of the Silo residents as she learns more about what exists outside their confined world.

To tell more about what happens in Wool would be to spoil the delight of discovering them as a reader yourself. I will just say that many times, when I thought I knew where the story was headed, I ended up being completely, pleasantly surprised by the clever twists from Howey. This is a book that will keep you reading late into the night, well past bedtime, because you just need to know what happens next. The action scenes are tensely written and the world created so fascinating, you simply don’t want it to end. Which is why it’s a good thing that the two sequels exist, even if I’m not sure they quite live up to the originality and spark of Wool.

Spoilers follow for Shift and Dust—do not read further if you haven’t read Wool yet. 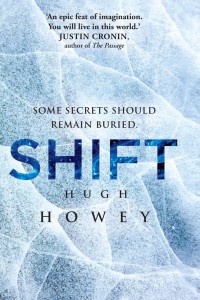 Shift takes the reader backwards in time—back to the origins of the Silo system and the end of the world as we, the readers, know it. We are told of two scientific advances which ended up bringing about the apocalypse: nanobots that could enter the human body for repairs (or destruction), and a drug which could remove memories of the past. How exactly this led to the end of the world is for the reader to discover from that point on, as we meet Donald Keene, a young congressman tasked with a very strange project calling upon his background in architecture. His boss, the gruff career politician Thurman, has put his own daughter Anna on the project to help Donald, which doesn’t exactly make him happy.  Donald is happily married and he and Anna are ex-lovers.

Meanwhile, the story also “shifts” to give us glimpses into other time lines, other stories. We see the world of Silo 1 through the eyes of Troy, who has been awoken from deep freeze to take his shift in command. Troy remembers very little of his life above ground, but he knows something isn’t right. While the others take their daily doses of medicine to suppress their memories, he starts skipping them to purposefully try to remember how they all ended up here, and why…

In a third storyline, we learn more about Jimmy/Solo and his backstory, how he survived for so long seemingly on his own in Silo 17 after its shutdown. This leads up to his eventual encounter with Juliette, to bring us back to the events in Wool.

Some readers found Shift boring compared to Wool, and it does take a while to get used to these new characters, to step back in time even as Wool left us wondering so much about how the silos came to be. I found Jimmy’s chapters the most compelling and at times harrowing, imagining his struggles first against other survivors in Silo 17 out to kill him and then against his loneliness and isolation. Shift certainly feels more like a “middle chapter” than a stand-alone title in its own right, but I did not find it boring. It simply lead up to my anticipation to find out how everything would be resolved in Dust…which, for the most part, did not disappoint although it left a great deal still hanging. 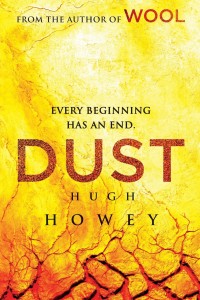 Dust brings us back to where the story ended in Wool, with Juliette now appointed Mayor and trying deal with the unrest in Silo 18 after her expulsion—and return. Many are skeptical of her stories of other silos, and fear her for what toxins she might have brought back from the outside. She is desperate to rescue Solo and the children from Silo 17, but she doesn’t want to trek above ground to do it. Instead, she wants to tunnel to from below, using their mining digger to reach them. But such acts if discovered could get their entire Silo shut down, as their only ally in Silo 1, Donald, is in deep trouble of his own.

There’s a lot of pain and sorrow in Dust as Very Bad Things start happening, at times to characters we’ve grown to really care about. But it’s a progression of events we can sadly understand could and would happen under such circumstances, when people have had their entire worldview threatened by someone they aren’t sure they trust (Juliette) and she’s a little too single-minded to see how her plans could very well lead to tragedy. Howey does a good job of tying up many of the questions and plot points introduced in the earlier books, but I will say the ending left me with a whole slew of more questions, things that didn’t quite make sense or weren’t satisfactorily explained. (Enough to perhaps write an entire separate post about them later on.) Some of the sub-plots here didn’t thrill me, either, such as the cliched evil religious group and young Elise chasing after her puppy. These elements just didn’t seem up to Howey’s level of writing in the rest of the series.

The Silo Saga has been so popular, with so many stories yet begging to be told about this universe, that many have taken to writing their own. And Howey has apparently been quite enthusiastic and encouraging of these “fan fiction” authors, many of whose work  you can find for sale on Amazon. I haven’t read any of these other titles yet and I’m not sure I will. While I appreciate the urge to want to explore these other stories and mysteries, these other silos besides 1, 17 and 18, I don’t know if any of them could be as satisfying as Howey’s own vision and explanations. For now I’m off to read more of his other works not associated with the Silo Saga, because it’s been such a joy to discover such a great new writer.