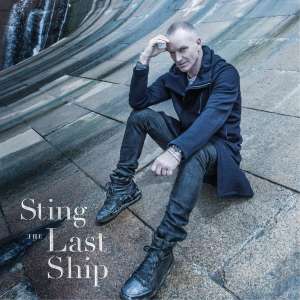 English musician Sting has always been one to explore different sounds and styles, from punk rock and reggae with The Police to Renaissance lute music with his 2006 release Songs from the Labyrinth. In September 2013, Sting released his first full album of new music in ten years: The Last Ship. The songs on this album are inspired largely by the theatrical musical he has been working on of the same name, which is scheduled to debut some time in 2014.

On this page you’ll find more information on The Last Ship: the album, the upcoming musical, and related live performances. This should be a very interesting project for all fans of Sting and his music, as he draws inspiration from his childhood in Newcastle and the shipyard workers who called it home.

About “The Last Ship”

The Last Ship is inspired largely by Sting’s memories and experiences growing up “in the shadow” of the Swan Hunters Shipyard in Wallsend, east of the city center of Newcastle, England. In an article for the Huffington Post, Sting describes what it was like living where these large ships, some of the biggest ones ever built, towered over homes and streets, and where thousands of men worked everyday – until the shipyard closed due to the economic downturn. Sting has previously touched upon these memories and this background in his 1991 album The Soul Cages, where the closing of the shipyard metaphorically reflected his own thoughts about mortality and the death of his father.

Sting confesses to having suffered from writers block for eight years after the recording of 2003’s Sacred Love – something fans have been acutely aware of as he’s filled those years since with touring of older material, the release of albums such as Symphonicities and of course the 2007-2008 Police Reunion Tour. But the idea of writing material for other singers and performers, and revisiting the story of his hometown shipyard, appealed and apparently brought inspiration once more to the award-winning musician.

Working with writing and lyricist Brian Yorkey, the theatrical production of The Last Ship will focus on some of these shipyard workers, their family and the community in Wallsend in the 1980s as the yard is closing. The local priest recruits them to build one “last ship” to then go off and sail the world, in a story that looks allegorically at issues such as the importance of work and having a purpose in life, and the relationships between fathers and sons. More details about the known characters and story – at least as it was coming about in 2011 – can be found in New York Times Arts article of the time.

You can hear more from Sting directly about The Last Ship in the press kit interview and production linked here. Then you can get preview of the first single from the album, “Practical Arrangement”.

Sting has written a considerable amount of material – some 25 to 30 songs – in the process of putting together the theatrical version of The Last Ship. Some of those songs (which may or may not be in the actual musical) are collected on the album The Last Ship, scheduled for release on September 24, 2013. As Sting says in the Huffington Post article:

“The play for The Last Ship will not debut on Broadway until 2014, though my hope is that people find this material interesting, as a document of the process, rather than the finished product. The album may stand alone, regardless of the play, but I feel it also will give people an idea of the story I have been so inspired to tell.”

Comparing the standard and deluxe versions of the album

Where to learn more about Sting and “The Last Ship”

Have you heard “The Last Ship”?

If so, let me know what you think of it!