Review of the Sophomore Release by the English-Sweedish Pop Trio

The Hoosiers’ second album, “The Illusion of Safety,” is a synth-pop confection that’s rocking the British charts. But will it alienate fans of their earlier sound?

This review was originally published at the Yahoo Contributors Network on August 27, 2010. 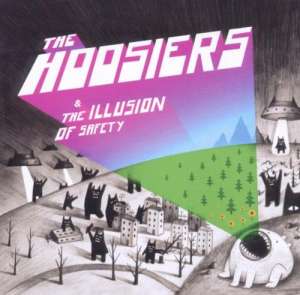 The Illusion of Safety by The Hoosiers. Get it now at Amazon.

Although relatively unknown in the United States, The Hoosiers achieved widespread success in the United Kingdom thanks to their 2007 debut album, The Trick to Life. The English-Swedish trio described their sound at the time as “odd pop,” and climbed the charts with catchy pop numbers such as “Worried About Ray” and “Goodbye Mr. A,” memorable as much for the band’s clever videos as for the music itself. While gaining a dedicated fan base, The Hoosiers were not loved by all, however. Many found their sound blatantly derivative and lacking cohesiveness. “Goodbye Mr. A” in particular was accused of bearing an uncanny similarity to Electric Light Orchestra’s “Mr. Blue Sky” and lead many to wonder if the band had any real originality or sound of their own.

The Hoosiers have just released their second album, The Illusion of Safety, on August 16, 2010. Sophomore outings can be a significant challenge for a band which achieved widespread success with their first record. Try to recreate what made the debut album so popular, and risk being accused of lack of originality and repetitiveness. Change sound too radically, and fans may be disappointed or alienated by the new direction. The Hoosiers seem to have chosen the latter path, forgoing the more rock-and-pop sound of The Trick To Life for heavy electro-synth, dance-music atmospheres. Upon first listen, I was disappointed not simply by this change in style but how it left the band’s music sounding too generic and over-produced to my ears. However, repeat listening still reveals much to love about The Hoosiers’ and their music, from their often clever takes on love song cliches to singer Irwin Sparkes’ wonderfully unique vocals.

The Illusion of Safety‘s first single and opening track, “Choices,” was released on August 1, 2010 and was received positively both by the music press and fans. It’s a ridiculously infectious, synth-laden number, and a lovely showcase for Sparkes’ falsetto vocals – although the rest of the band seems lost under the slick electric sheen. Still, the song is so insidiously catchy and hard to stop listening to that the band itself has even recorded a 45-minute parody of it, “Stop Giving Me Verses.” “Bumpy Ride” follows, which sounds like it could have come straight off the soundtrack to a 1980s John Hughes flick. But there’s something hard to resist about the song, despite its unapologetic cheesiness. “It’s gonna be a bumpy ride/But it sure beats standing still,” Sparkes assures us, and over such cheery music it’s hard to disagree with him. There’s a depth to the song’s lyrics about triumphing over difficult times – even reveling in the challenges they present – that is extremely uplifting.

The album takes a weaker turn with the third track, “Who Said Anything (About Falling In Love).” This forgettable, slower number limply recalls Maroon 5 and is only redeemed by Sparkes’ still-lovely vocals, here mostly restrained until the plaintive chorus. “Unlikely Hero,” the album’s second single, is a step back in the right direction with more upbeat, cheery synth-pop. “I like everybody/But not everybody likes me,” Sparkes tells us in the song’s infectious chorus, but it’s hard not to love him for these delightful lyrics and vocal acrobatics.

“Lovers In My Head,” is a more successful take on a ballad than the album’s third track, with its clever, wistful lyrics about missed opportunities and loving someone from afar. The verses’ poppy, staccato synths transition into lush, Cure-like choruses and a beautiful instrumental bridge. One of the album’s best tracks follows, the solidly rocking “Live By The Ocean.” With its driving piano and layered, sonorous vocals, the sound reminds one easily of Keane with more than a touch of classic Elton John. Sparkes implores the listener “for once in your lifetime will you/Do what you want, not what you have to,” and the song is perhaps the most reminiscent of the pop-rock fun of The Hoosiers’ first album, The Trick To Life.

The Illusion of Safety takes an odd turn with the next track, “Devil’s In The Details,” which features drummer Al Sharland taking a turn on the vocals. His less-polished, slightly awkward delivery fits the offbeat song quite well, although it will surely not be to all fans’ tastes. Bells and rhythmic synths are the primary accompaniment, suited well to this dark science-fiction story about scientists who have unleashed hell on Earth by trying to play God. After this somber, pensive number, the listener is rocked back to attention with “Glorious,” which seems to be many fans’ favorite track on the album but leaves me cold. Sparkes does his best to channel the late, great Freddy Mercury with heavily layered vocals and bombast, but cheesiness wins out over songcraft here and, to be honest, The Hoosiers are no Queen. The verses do have some clever lyrics (“Take that sharp sharp tongue of yours/And cut me in two/I’ll attack from both sides”), but they’re just not enough to win me over.

Better is “Made to Measure,” another relentlessly 80s-sounding number which could have easily been at home on a Bronski Beat or Alphaville album. Irwin is imploring his lover to go on the run with him now that they’ve been discovered, leaving one wondering just what makes their love so scandalous to those he says “will come for me/and none of them will comfort me.” “Giddy Up” follows with more heavy synthesizers and a catchy, slightly swinging dance groove. Still, it’s a bit forgettable compared to the previous track and the next, “Sarajevo,” another one of my favorites on the entire album. This song recalls the thick synthesizer soundscapes of the Pet Shop Boys, building masterfully from its sparse opening to a triumphant climax. It’s joyous, sonorous, and everything that defines perfect synth-pop, the kind of song to play at the end of the night on the dancefloor when no one’s ready to go home but everyone needs to end the evening with a bang.

The last track, “Little Brutes,” is a bit disconcerting in comparison. Here The Hoosiers once again risk being labeled as nothing but derivative, as the sound is pure Radiohead. Sparkes seems to be doing his best Thom Yorke impersonation over the song’s somber guitar and choir-like backing vocals. While it’s a good song, it seems out of sorts with the rest of the album and should have perhaps been saved as a B-side or outtake for fans only.

The Illusion of Safety, as a whole, is mostly highly successful at what it sets out to be: a record of pure synth-pop fun and entertainment. But I do find myself missing the less electronic sound of their first release, which seemed better suited to showcasing the band as a whole, and not just vocalist Irwin Sparkes. Sometimes it is difficult here to tell how much of the rhythms are computer-programmed and how much are actually drummer Alfonso Sharland. The work of bassist Martin Skarendahl is also often lost under all the electronic orchestration, and little of Sparkes own guitar-work is clearly heard as well.

Even so, the band seems destined for even greater heights of popularity in the United Kingdom with this release, as they have tapped into the current trend for catchy, disposable electronic pop to an extent that few others have, save Lady Gaga. I find myself more interested in where their next release may take them, and if they will somehow find more of a balance between trendiness and classic pop songwriting. I believe they have the skills and talent for it, but in the meantime I feel that The Trick To Life will still get more repeated listening from me than The Illusion of Safety.