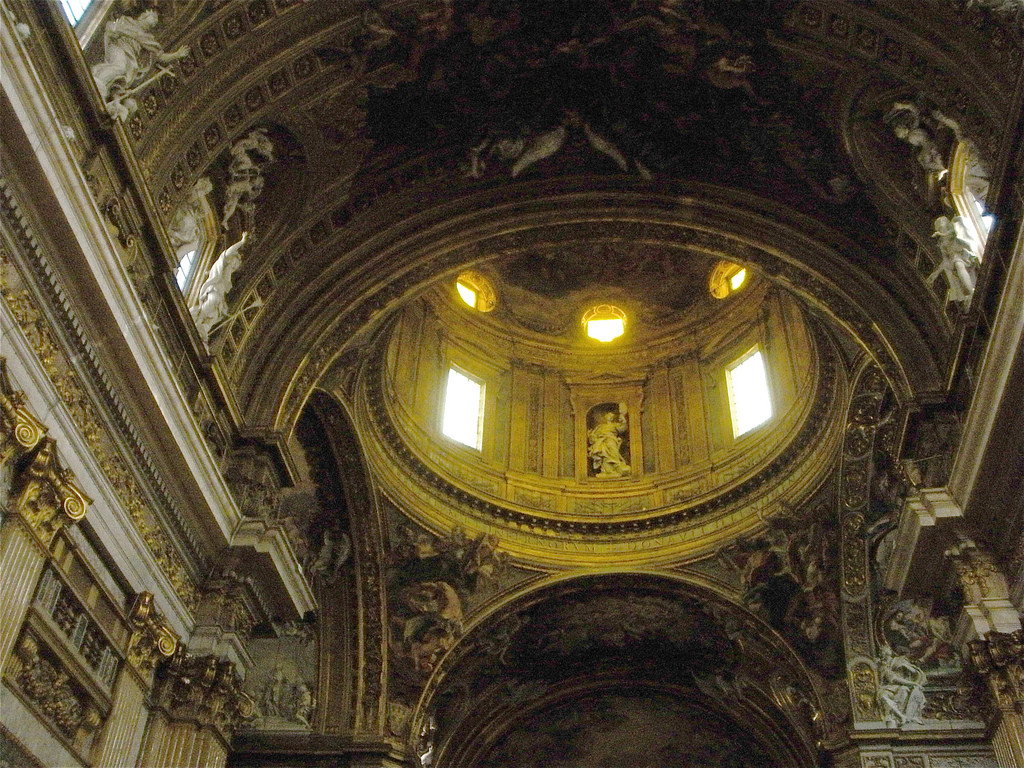 Inside Sant’Ignazio Church in Rome, Italy. Photographs on this page are by the author, sockii.

Step inside any church in Rome, Italy and you are sure to be amazed by glorious architecture, artwork, and religious artifacts. The Church of Saint Ignatius of Loyola at Campus Martius, otherwise known as Sant’Ignazio, is no exception. This Baroque church from the 1600s is well worth a visit for its history as part of the center of the Jesuit area of Rome, and for the amazing illusionistic frescoes painted by Andrea Pozzo.

History and Construction of Sant’Ignazio

Sant’Ignzaio originally served as the Rectory for the Collegio Romano and is dedicated to the founder of the Jesuit order, Ignatius of Loyola. The Collegio Romano was where many future bishops, cardinals and popes studied before the college was confiscated and turned into a regular school in 1870. Pope Gregory XV had been a student at Collegio Romano, and after the canonization of Saint Ignatius of Loyola in 1622, he suggested to Cardinal Ludovico Ludovisi (who happened to be his cousin) that a new church should be built in the saint’s honor. After reviewing numerous plans, Ludovisi accepted those of Orazio Grassi, a Jesuit mathematician and professor at Collegio Romano.

Construction of Sant’Ignazio began in 1626 and was not finished until 1650, as older buildings on the college campus first needed to be demolished in order to make room for the massive new church. Final consecration did not take place until 1722 by Cardinal Antonfelice Zondadari.

Sant’Ignazio is built with a standard Latin cross plan and has numerous side chapels, similar to the Church of the Gesu in Rome, also part of the Jesuit area. The church is a fine example of Baroque style with colorful, ornamental marble, brilliant gilding, elaborate stucco reliefs and altars. Most stunning upon entrance, however, are the trompe l’oeil ceiling frescoes by Andrea Pozzo.

The frescoes and paintings of Andrea Pollo at Sant’Ignazio 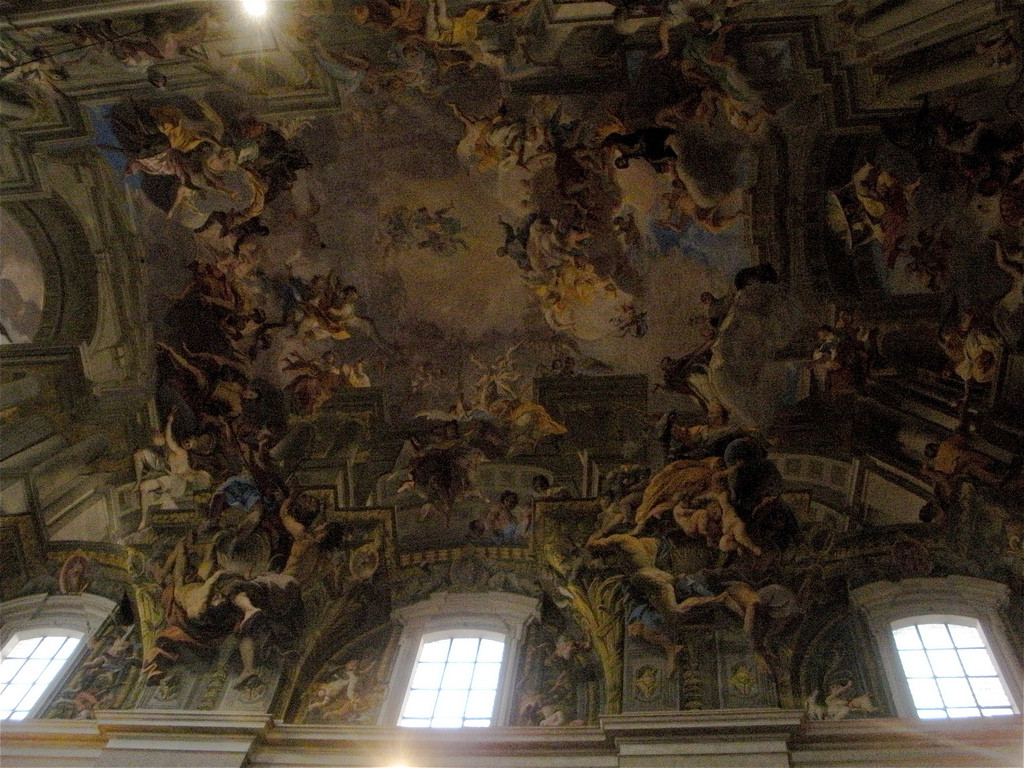 The incredible fresco which covers the nave ceiling at Sant’Ignazio was painted by a Jesuit brother, Andrea Pozzo, who was considered a master of the theories of perspective. The three-dimensional effect of the fresco is breathtaking, with illusory clouds and soaring figures seeming to float right off of the walls and ceiling. The fresco celebrates Saint Ignatius being welcomed into heaven by Jesus and the Virgin Mary, as well as honoring Ignatius’ work during his lifetime. The church ceiling appears to open up to a bright blue sky, into which the figures are ascending. The three-dimensional effect is strongest when viewed from a marble disk marker on the floor. 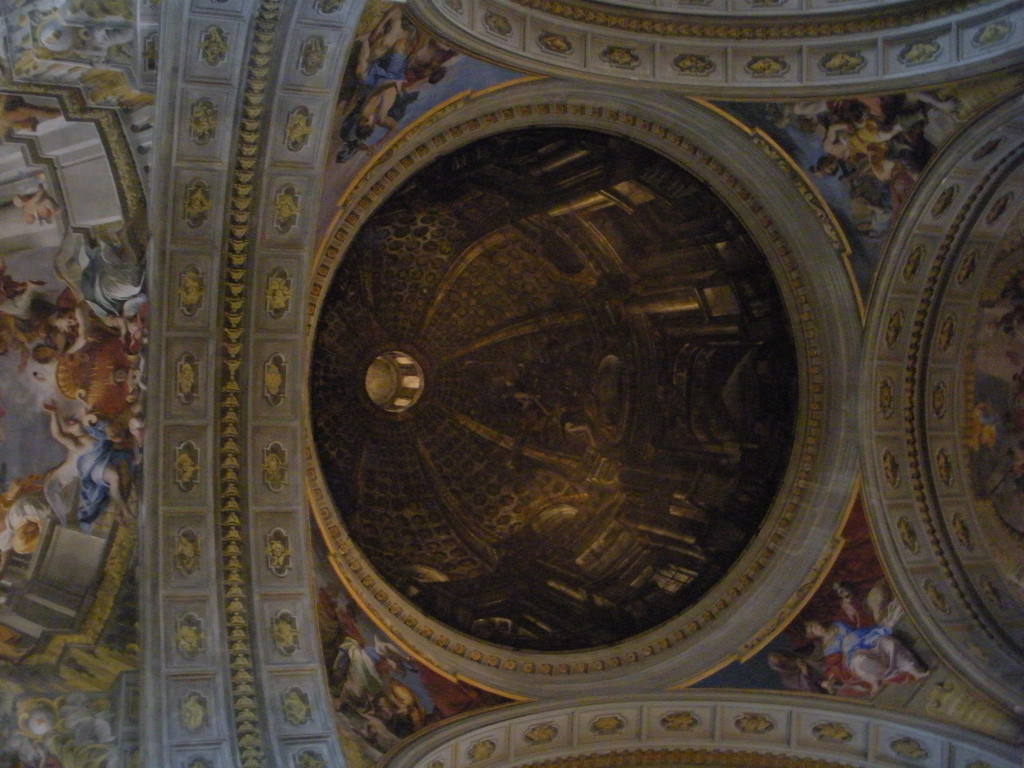 As a planned cupola was never built, in its place Pozzo painted another trompe l’oeil on canvas. When viewed from a different marble marker on the church floor, the painting creates the three-dimensional illusion of a high dome. Pozzo’s original painting was destroyed in 1891 and replaced thereafter. Other frescoes by Pozzo in the eastern apse of the church illustrate important moments from the life of Saint Ignatius.

Other sights of note at Sant’Ignazio 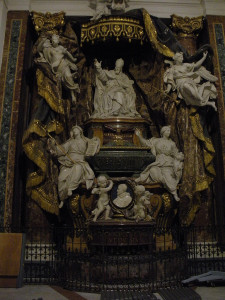 The Tomb of Pope Gregorius XV

The side chapels of Sant’Ignazio contain other artwork, altarpieces, and memorials worth reflection. A chapel on the left contains the relics of Saint John Berchmans, the patron saint of altar servers. Pope Gregory XV and Cardinal Ludovisi’s funeral monuments can be found in a chapel in the south-east corner of the church. An impressive marble relief by the French artist Pierro Legros illustrates “St. Alyozius Gonzaga in Glory,” next to which is buried Saint Robert Bellarmine. Gonzaga was Bellarmine’s student. Other paintings and marble work by artists such as Pierre de Lattre, Stephano Pozzi, Luigi Garzi and Francesco Trevisani can be found within Sant’Ignazio. While not major works of art, all combine to create the lush, lively and glorious atmosphere of the church to inspire visitors to worship.