Review of the premiere performance at the Virginia Arts Festival

Saturday night in Norfolk, Stewart Copeland rocked the house with the premiere of his new symphonic piece Orchestral Ben-Hur. The audio and video extravaganza featured Copeland performing on stage himself, alternating between drumkit and percussion rack alongside the 60-member Virginia Arts Festival Orchestra. They were performing Copeland’s score to a 90-minute edit of Fred Niblo‘s 1925 silent film Ben-Hur: A Tale of the Christ, a truly epic production which featured a cast of more than 120,000 and was the most expensive silent film ever produced in the classic era.

Those in attendance perhaps expecting a sedate evening of old fashioned movie-making and symphonic music were certainly in for a surprise. The piece opened with a percussive fury from the moment the MGM lion roared to announce the opening credits, assuring everyone that they were in for a truly raucous night. Ben-Hur: A Tale of the Christ is just about the perfect vehicle for Copeland’s style of music: hugely dramatic, sometimes over-the-top and bombastic, yet with intense emotional moments that can hurt your heart with their tragedy and beauty.  The many scenes set in and around Jerusalem and Antioch gave Copeland a chance to draw upon Arabic musical influences, which he always utilizes so well and were perfectly suited for this piece.

This 1925 version of Ben-Hur is closer in story and religious spirit to Lew Wallace’s original book than the famous Charleton Heston version of 1959, making it a wonderful film to experience over Easter weekend—some of the most holy days in the Christian faith. (This loosely-practicing Episcopalian felt suitably uplifted.) I had not seen this version of Ben-Hur before and must confess I was swept away by the intensity of the action, and what Niblo was able to accomplish in 1925 that other filmmakers can’t accomplish today with our “modern technology”. Of course the chariot race was a thrilling spectacle to behold, but even more amazing to me was the pirate battle scene: brutal, bloody, frenetic, and real in a way no cgi-enhanced modern action sequence seems capable of achieving. Indeed, as much as I was there to watch and listen to Stewart, it was hard to tear my eyes away from the screen during scenes such as this:

Between the action on the screen and Copeland’s music, the audience was left almost breathless and in a state of shock by the end of the sequence; the intermission that followed it was truly necessary for everyone to recover and prepare for the darker and more thoughtful second half. 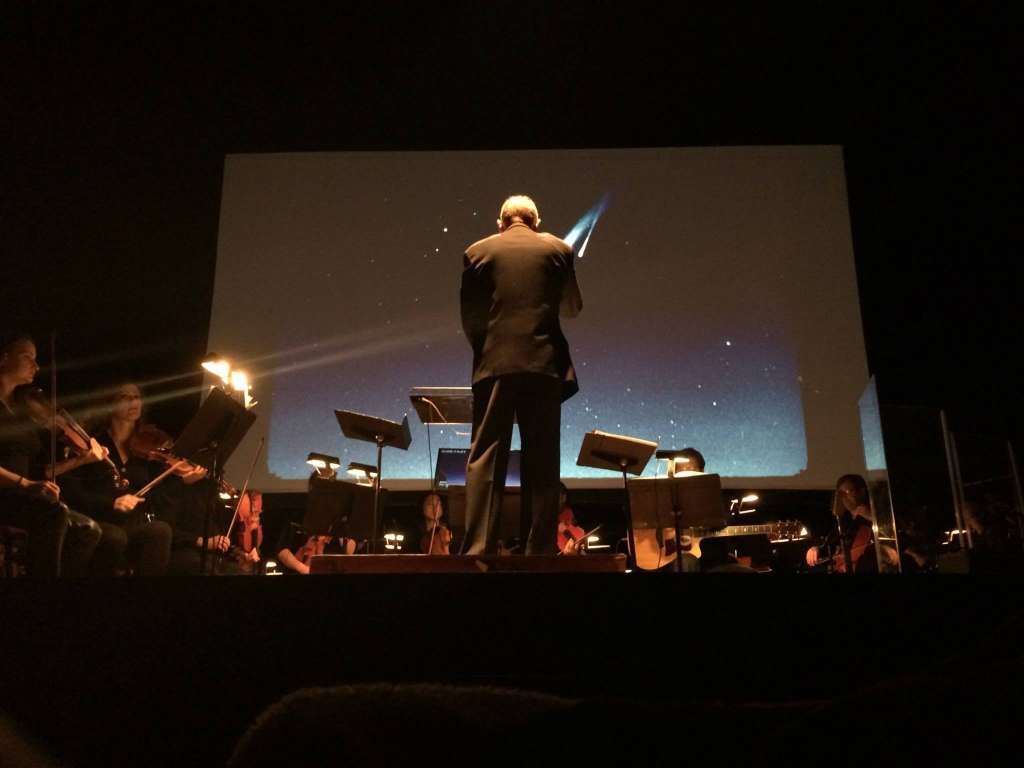 The Virginia Arts Festival Orchestra and conductor Richard Kaufman deserve great credit as well. They brought excellent energy and timing to the complicated music, and you could catch many of the musicians intensely into the piece, swaying in time, smiling in excitement…it truly is an infectious work. Guitarist Mike Oberdorfer shared the front of the stage with Copeland and Kaufman and also deserves special mention for his excellent performance, alternating between electric and acoustic guitar throughout. 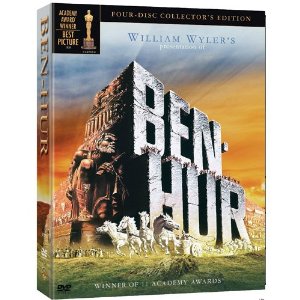 Ben-Hur: The Collector’s Edition box set featuring both the 1925 and 1959 films. Get it on DVD or BluRay at Amazon.

Some will likely criticize Copeland for daring to edit down the 143-minute long original film to 90 minutes in length, which he argued (in a pre-concert talk) was both to reflect modern audience attention spans and also the physical limits of the orchestra members—and himself! Honestly I think to extend the piece much longer would have been fatiguing on the audience; the edit distills the film and the story of Ben-Hur down to its emotional core and central message, and viewers now intrigued are welcome to check out the full length film available on DVD today.

Others may also criticize that at times he overwhelmed and dominated the orchestra with his drumming, drowning out the other instruments. He has repeatedly discussed the difficulty of “toning down” his drumming for an orchestral instead of rock concert setting—especially once the adrenaline starts racing through the blood as it clearly was on Saturday night! But for those of us who were there as Copeland fans, this was no hardship at all. And I do believe most of the rest of the audience was equally impressed, with standing ovations and enthusiastic applause following both the first half at intermission and again for the closing bows.

I can honestly say as a longtime fan not just of Stewart Copeland the rock drummer but Stewart Copeland the composer, this may be my favorite complete composition of his performed to date. The amount of work he has put into this product (not just the music but his meticulous efforts to “clean up” the film print) and his passion for it is evident. I never saw the 2009 Ben-Hur Live production for which he originally composed much of this music but I have listened repeatedly to the CD recording of it; what was amazing to me was hearing how he  elevated that music to such a higher level here, how well (in fact, better) it worked as a silent film score and live performance. And while I was disappointed to learn that neither a video or audio release of this production is likely, it will most assuredly be performed again. One performance is already scheduled for October 14, 2014 with the Chicago Symphony Orchestra, and others may be in the works for later this year and 2015. I can only hope!

An unexpected bonus for this fan was accidentally running into Stewart Copeland on the streets of Norfolk the morning after the performance. It was wonderful to have the chance to tell Stewart in person how much we had enjoyed it, and to also tell him about one of the best reactions I’d observed in the audience Saturday night. There had been a family with several young children (no more than 8-10 years of age) sitting a few rows behind us. At intermission, after the pirate scene, the kids were all literally bouncing up and down with excitement. One boy even exclaimed to his mother: “That was like the best movie ever!”  To be able to reach and connect with even the youngest audience members, ones raised today on special effects extravaganzas like The Avengers and Star Wars? I think that says a lot. And from Stewart’s reaction when I told him this story? I think that was just the kind of audience he was hoping to reach.