In case you haven’t noticed, since 2005 Vinyl Record Collecting has had a monstrous resurgence.  Turntables are in high demand as well. 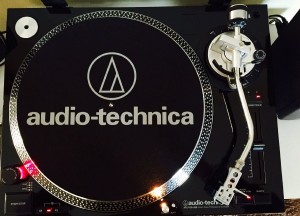 Many different turntables are being produced, from the starter models, to the high-end audiophile units. Knowing what to get can be a daunting task.

Below I have handpicked 5 different record players that I have personally used that range from a good first turntable, up to a pair of reasonably priced audiophile quality record players.

Many other articles I’ve read about what your first record player should be tried to sell me on the idea of the cheap Crosley Record Players. Let me be as emphatic as possible here… DO NOT DO IT!

Those Cheap, yet charming record players that look good sitting on an end table, and match your room motif simply are not built to last. The sound quality is sub-par to say the least. Why not get something that’s going to do your vinyl justice.

Many of those record players have cheap low quality needles that will destroy your record collection, and have horrific sound quality to match. Ceramic needles should be thought of as the scourge of the hobby.

There are many different options out there that will not bust your budget.

The Audio Technica basic turntable has probably been purchased by more people the last 10 years than any other. While it’s not going to live up to a serious audiophile’s idea of great sound, it certainly is a million times better sounding than those pretty little Crosley record players. 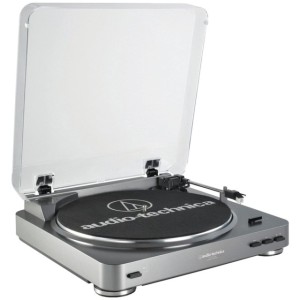 I Bought this exact model  Audio Technica for my step son who only had a passing interest. Once I got it set up for him, I was amazed at just how good it did sound.

I don’t want to over emphasize the point, but the difference between these cheaper priced turntables and the more expensive units is not as wide as you might think.  If it has a decent stylus/needle, and its belt driven, I feel it’s going to be acceptable.

This Audio Technica and all the others except the Pro-Ject Debut are completely plug and play, meaning you can plug directly into your receiver. You don’t need to buy a separate phono preamp. You might have to plug into the AUX or DVD jack if a specific phono jack hasn’t been included on your receiver. 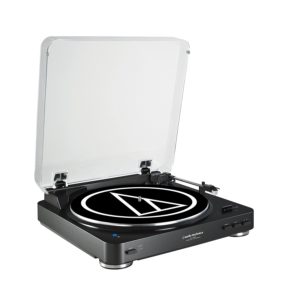 io Technica has everything the ATLP60 has but with Bluetooth wireless capabilities added.  This is a lot more than just using headphones too. You can pair up just about any kind of speaker with wireless ability.

The wireless connection gets rid of all the wiring needed for the typical turntable. You could place speakers in the kitchen, bedroom, or the bathroom…any where that the signal will reach.

It also has the same sound quality as the AT-LP60, but the convenience will cost you about 80 dollars more than the version without wireless Bluetooth capability.

Their are certainly many options out there if you want something a little better than the Audio Technica, but not as expensive as the typical audiophile turntable.

Sony and Pioneer come to mind first. These are 2 trusted brands that I have personally owned. In fact Both of them are completely plug and play, and with very good sound quality for the price. Both of these can be had for less than 200 dollars.

In fact, Sony and Pioneer’s low-end record players are nearly the same record player, just with Sony or Pioneer name on the shell. The only difference really being whether you decide to upgrade the needle or not.

A s mentioned the Sony and the Pioneer budget models are very similar. The Sony seemed to have a muddy bottom end bass sound compared to the Pioneer.

The Pioneer PL990 I did use to own,  just seemed a better choice overall. When you’re talking about the lower priced record players, you are splitting hairs when talking sound quality. I did think the Pioneer had more life than the Sony. 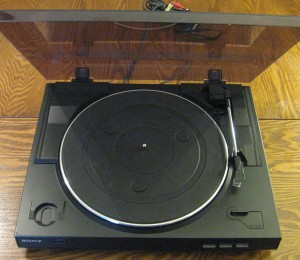 I felt the brightness of the instruments came through better on the Pioneer, perhaps a better sound stage. I don’t mean to denigrate the Sony at all, it wasn’t bad… but I did sell it after being gifted the Pioneer.

In Fact I liked the Pioneer brand so much, I was hesitant to get my eventual current Turntable, the Pro-Ject Debut Carbon. I still am not sure the Pro-Ject I paid $399 for is that better than the $150 Pioneer I had. It is better, clearer and cleaner sounding…but not a difference I felt was worth $250.

I don’t have experience with any of the extreme high-end turntables… for what I like, I am happy with the Pro-Ject, and doubt I would ever pay a thousand dollars for another record player.

In fact, if this Project went bad, I’d probably just go back to the Pioneer, and perhaps use an upgraded Stylus.

The Pioneer PL990 which I have owned in the past, is now sporadically produced and sometimes can only be found on the secondary market. Pioneer has added many new models to their product line from the basic starting at $119, to the audiophile going all the way up to an astounding 500 dollars.

That PL-990 also had a strobe light which the Sony did not, I always liked the way that looked when playing a record at night. The sound was slightly better than the Sony, and it did also look like a more expensive turntable just with the design alone. 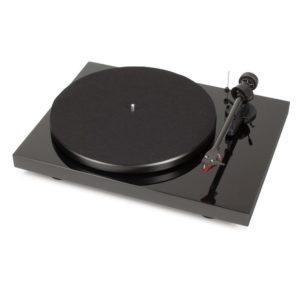 The best bargains out there in my opinion are the Pro-Ject Debut turntables. While you might be surprised to find out, I don’t consider the gap in sound quality to be as wide as you might think; between the Pro-ject and the 100 dollar Pioneer Pl-990 I had as my first turntable.

A real stickler for crisp clear highs, and clean, not muddy bottom bass sound will appreciate the upgrade to the Pro-ject Debut series. That Pioneer honestly was just a notch below the Pro-ject in sound quality.

If you’re looking for great deals on vinyl records to spin on your new turntable here are a few articles that might help you on your way:

NOTE: While I am an Amazon Affiliate, and could be paid a commission for anything you buy after clicking through a link from this page. These are my own opinions of using these record players first hand. I have not been paid for these reviews by the manufacturers.