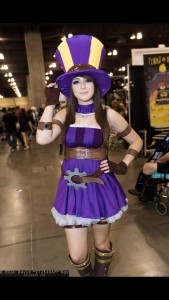 Great job on her first costume!

Surely you have more than one costume for the 4-day event? No? Don’t worry, there will be many vendors there, ready to get you suited up in no time. Okay, maybe not for this con, but if you start now you could have a really great costume ready for the next one!

I will admit my interest in Cosplay is personal: My daughter is a Cosplay-er. She loves it and spends all her free time working on her next costume. But not just the big one, she’ll pull together three or four less complicated costumes for photo shoots or as back ups for the events she attends.

The amount of work that goes into creating some of these costumes is a testament to creativity and commitment. I wonder if all of the teenagers who’ve spent hundreds of hours creating a set of wings or a copper arm contraption spent at least half as much time on homework during their last school year. I also hope they’re marketing their skills and turning their passion into a business.

If  they were in fact busy with the books, they might have hired someone else to create their costume and props. At this years con, you’ll see hundred of vendors selling wares ranging from jewelry, books and art, to pirate gear, hand made bustiers or leather leggings.

At Phoenix Con held last February in Glendale there was a European Renaissance group. A member of the group talked to my friend and I for at least 30 minutes about what they do and the sub-groups that make up the whole. Want to learn how to make swords or bead the queens head wear during a certain time in history? There’s someone who can teach you. I hope they’re coming this weekend. Fascinating group.

The best part is how incredibly nice and supportive people are. Probably because everyone is so happy being able to show of their hard work in pictures with con-goers. My daughter has made so many friends during the events and at Phoenix Con this year she’s participating in a group costume as Psylocke, “The Women of X-Men, Steampunked.” 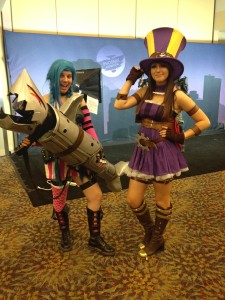 Yes, she made that prop.

Maise Design is the master mind behind this group. They’ll be hosting a Panel, discussing the ideas, costumes and props on Saturday at noon, “Steampunk X-Men” in Comics North 121. I’m excited to see the final product all put together, along with the other costumes that have taken what seems like a year to create and finish. It’s my understanding that some of the Cosplay-ers are coming from out of state to be a part of the Maise Design group.

I’m looking forward to the kids costumes and the parent+kid costume pairs. See the joy in the kids faces, as well as the parent, is the best part of the entire con. Getting to play superhero with dad all day? Riding around in a motorized droid? Dressed as a Steampunked Cowboy? All of these parents deserve “Parent of the Year” awards. All of them.

Phoenix is expecting its first triple-digit weekend, so you might consider leaving the wookie costume at home. I read the sky bridge will be open, and air-conditioned, making travel between the convention center buildings cooler and quicker.

If you’re going, I recommend reserving a parking spot in one of the two garages where this option is available. Parking in downtown Phoenix is actually fairly easy, when you’re dressed for a baseball game. Not so much when you’re wearing 4-inch platforms and 6-foot wings.

Something else to keep in mind: There are people in and under those amazing costumes. Please be considerate when asking for pictures. Most will be more than happy to strike their pose for a picture with you – that’s why they do this! But you never know what’s happening in someone else’s world at any moment. Their wings could be coming apart or some other wardrobe malfunction is in progress. Be kind, be patient, and you’ll get all the photos you need. 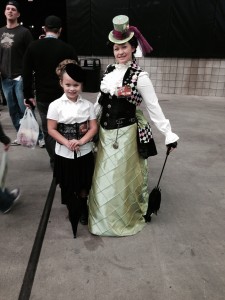 How cute is this! I asked if I could take their picture and they got into their pose. So sweet!

Be sure to ask about the costumes too! I love the stories behind the creation – who the character is, from what part of the characters evolution, steam punked or not. The wearer is usually more than happy to share the story, but I’m sure as the day goes on, the story gets shortened and the tellers enthusiasm wanes. Hey, telling and retelling a story can get tiring! And striking that pose all day long takes its toll on a body. So if you come across a cranky cosplayer, give them a break. Playing dress up at this level is a full body, full attitude sport.

Be sure to stop in during the X-Men Steampunk panel at noon on Saturday at comic North 121 and check out this incredibly talented group. I’ll see you there!