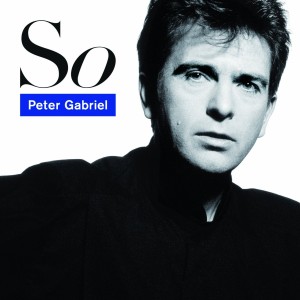 In May 2012, Peter Gabriel announced that he would be touring this fall to mark the 25th anniversary of his massively successful 1986 album So. So brought Gabriel’s music to a largely new, mainstream audience in the 80s – many of whom knew little about his more experimental rock releases or even his previous years as front man for the progressive rock band Genesis.

Combining pop sensibilities with world music influences – and utilizing an exceptional selection of musicians including Tony Levin, David Rhodes, Manu Katch, Kate Bush and Laurie Anderson – So went 5x platinum in the United States and received four Grammy nominations, among many other honors.Its supporting tour was equally successful and notable, and for the 2012 Back to Front tour Gabriel has brought back original touring band members Levin, Katch, Rhodes and David Sancious. The concert itself celebrates not just So in its entirety but the creative process of making music itself. Peter Gabriel, an artist in every sense of the word, challenges the audience as always to join him on an incredible journey in concert. I was fortunate to experience the tour when it came to Philadelphia on September 21, 2012, and my full review follows below. 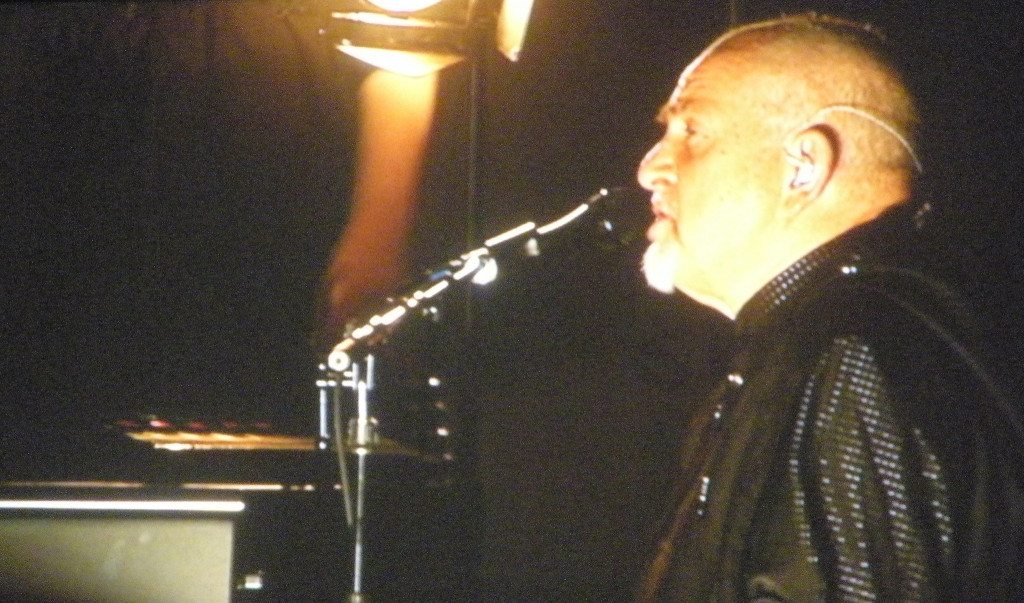 Peter Gabriel on stage September 21, 2012 in Philadelphia, Pennsylvania. All photographs on this page are by the author, sockii unless provided by Amazon.

Peter Gabriel has never been a musician to “follow the crowd,” to do things either on record or in concert as every other big name rock act would.Indeed, he begins the current Back to Front performance by catching the early-arriving audience members off-guard, simply walking out onstage to greet them with the house lights still raised. Gabriel describes how the show will be divided into three parts: first an acoustic set exploring the act of creating music itself, then moving into an electronic set, and finally the entirety of the So album as the “culmination” of the process. But first, there will be a short opening set by his two backing vocalists for the tour, Jennie Abrahamson and Linnea Olsson. Their warm-up set is pleasant, and pleasantly brief – perhaps four songs before a quick changeover for the main performance. With an 8pm concert start time, Gabriel began his set at approximately 8:45pm.

Peter returned to the stage at that time, again with the house lights up to start with an unfinished song. In fact, it is a song with no lyrics yet, so he invited the audience to please let him know if they knew what the lyrics should be. Performing on piano, Gabriel was joined for this first mellow, bluesy number by the incredible Tony Levin who was greeted with loud cheers and applause from the knowledgeable audience. From there, the acoustic set continued with “Come Talk To Me” and “Shock the Monkey,” both of which were interesting to hear in a non-electric format, if perhaps lacking the impact and powerful arrangements of the recorded versions.For me the show really kicked into gear with a stunning and unexpected (for I hadn’t spoiled myself with the setlist) performance of “Family Snaphot.” Inspired by the story of Arthur Bremer, the man who attempted to kill Alabama Governor George Wallace, it’s a chilling look into the mind of an assassin which struck me as particularly relevant today in the wake of the Aurora, Colorado shootings this summer. For this song, too, the band kicked into full electronic instrumentation at last for an effective end to the first part of the show. 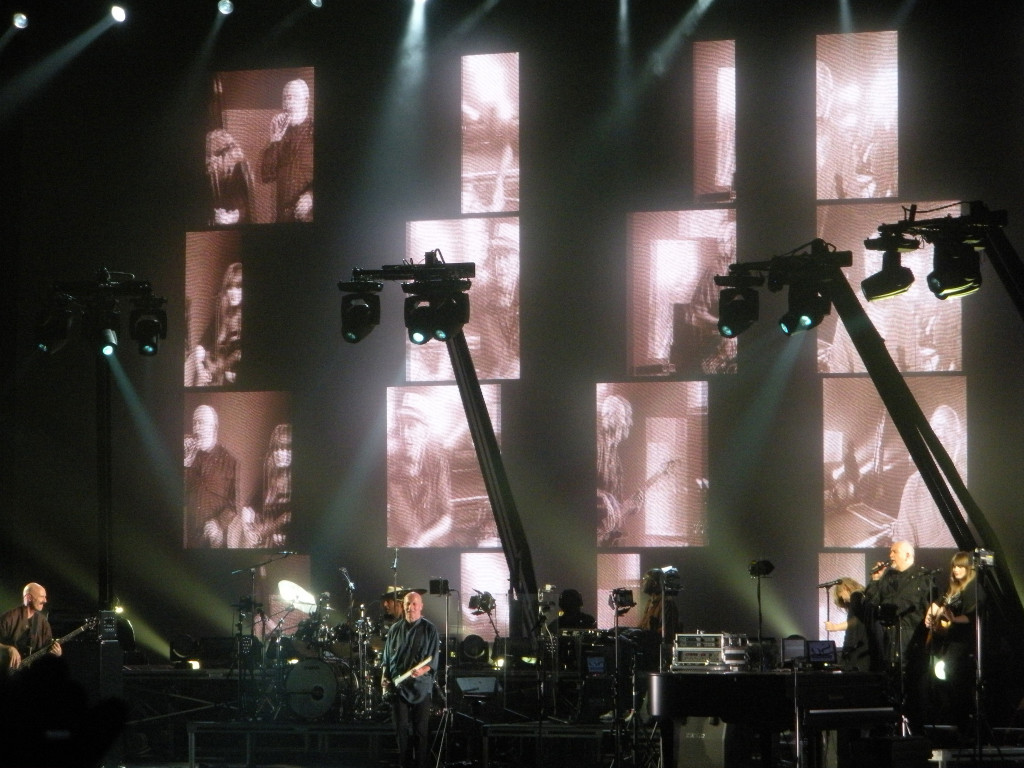 The “electric” set then began with a strong version of “Digging in the Dirt.” Gabriel stepped away from the keyboard at last for this number, commanding the stage and getting the audience on their feet (albeit briefly – this rather aging crowd seemed to prefer to sit most of the night, much to the annoyance of some of us who wanted to stay on our feet.) But the glorious “Secret World” followed, bringing a celebratory feeling to the night as Gabriel, Levin and Rhodes spun and danced in joyous circles. Rounding out a selection of fan favorite tracks included “The Family And The Fishing Net,” “No Self Control,” “Solsbury Hill” and “Washing of the Water.”

I was only disappointed that no songs were featured from Gabriel’s 2002 album Up; “More Than This” or “Growing Up” would have been lovely to hear, but I will not complain after getting the chance to hear other songs I never thought I’d get the chance to live.

The So set began at this point with “Red Rain,” as appropriate red lighting effects fell upon the stage. The album was performed in order, start to finish, except for moving “In Your Eyes” to the conclusion. Along the way we were treated to excellent renditions of all of these wonderful songs, most notably for this fan an incredibly creepy, dark staging of “We Do What We’re Told.” 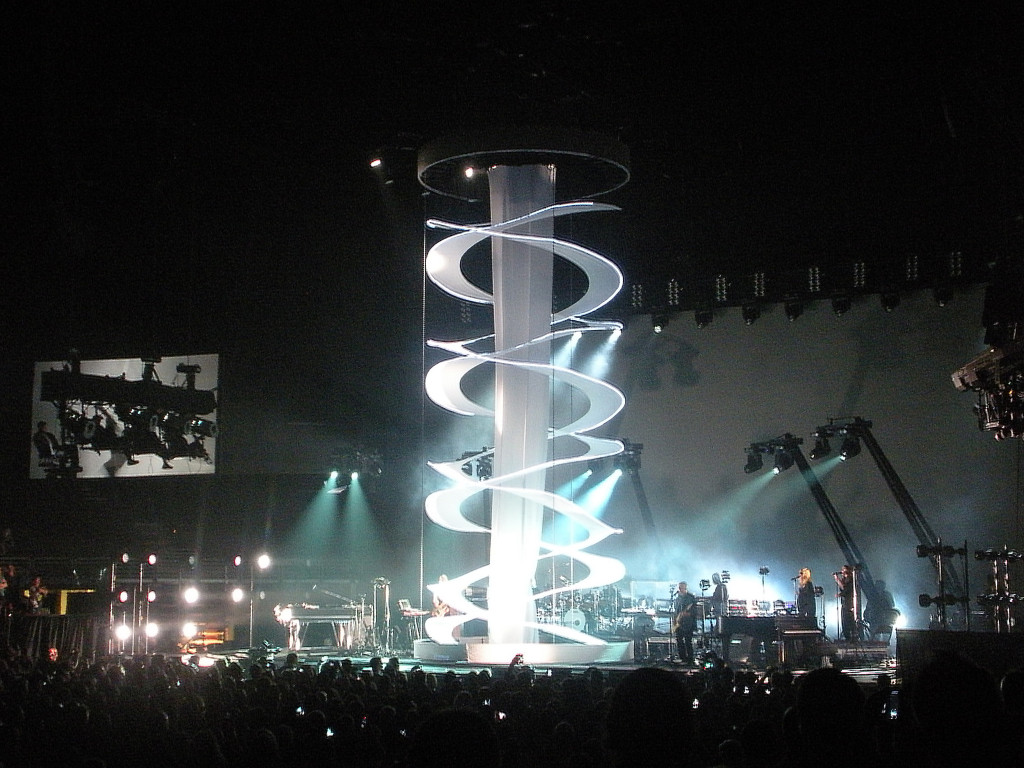 Gabriel has always known how to command attention on stage, which was no less evident this night than the first time I saw him perform live some 25 years ago. At 62 years of age today – heavier, with a shaved head and a look which I’ve jokingly referred to as reminiscent of the Travelocity Roaming Gnome – Gabriel still manages to captivate with a uniquely masculine, openly sexual presence even if his youthful good looks have faded. He can bring menace to songs like “Digging in the Dirt”, vulnerability to “Mercy Street”, and childlike joy to “Solsbury Hill” with such seeming ease it is hard to ever tear your eyes from him on stage – and he manages to connect to you whether you are standing up close on the floor or way up high in the upper levels of an arena.

Also impressive were his vocals, which have held strong and beautiful through these years, seemingly barely affected by the passage of time. At a few points he noticeably dropped an octave, but then always managed to reach up and hit soaring notes when most needed.After “In Your Eyes” a brief break followed before the encores. From 2000’s OVO was “The Tower That Ate People” – where, indeed, a tower descended from above to “swallow” Peter in a tunnel of billowing white fabric. Unsurprisingly the night ended with a moving rendition of “Biko,” the audience singing the final cries as each musician left the stage, until only Manu was left to sound out the final drum beats. 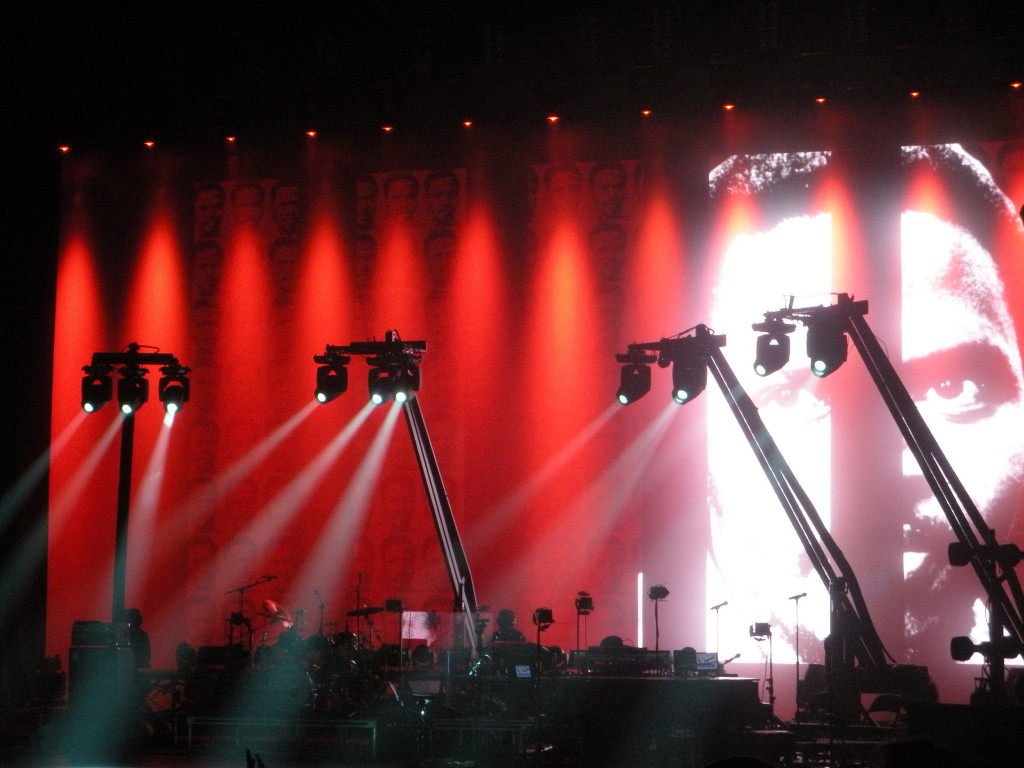 As a long time Peter Gabriel fan, I found the show overall incredibly moving and memorable, and well worth the $150 ticket price. It was most certainly a show meant for the fans, not perhaps the casual listener who only knows Gabriel for “Sledgehammer” and “In Your Eyes” and perhaps one or two other “hit” songs. Indeed, I did hear some people seated around us grumbling a bit about the show being “kind of mellow” for their tastes, or clearly not knowing some of the material performed. But that’s something I give Gabriel great credit for – he’s not interested in just giving the audience “the hits.” This tour presents a cohesive set of material showcasing the process of making music, not simply dredging up a popular album from the past for the sake of nostalgia (and old record sales.)

It was also quite an interesting experience seeing this concert just a week after checking out Madonna’s MDNA Tour the week before. While Madonna may have been trying to reach for a “great message” with elaborate stage productions, visuals, and costuming, Gabriel actually achieves a powerful message through his music and much simpler yet effective lighting effects – and his own humble dance moves. If I had to chose to spend money on one tour over the other this fall? My answer without hesitation would absolutely be to see Peter Gabriel, if you truly love and appreciate music and fine musicianship more so than excessive spectacle. 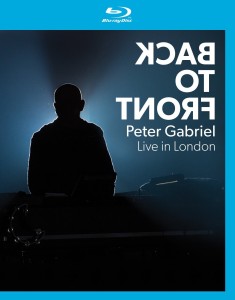 Did you miss the “Back to Front” tour, or want to relive it at home? You can with the official tour video recording, available in Blu-Ray and DVD editions at Amazon.

5. Digging in the Dirt

7. The Family and the Fishing Net

10. Washing of the Water

18. This Is the Picture (Excellent Birds)

20. The Tower That Ate People

Peter Gabriel Back to Front: The Touring Band 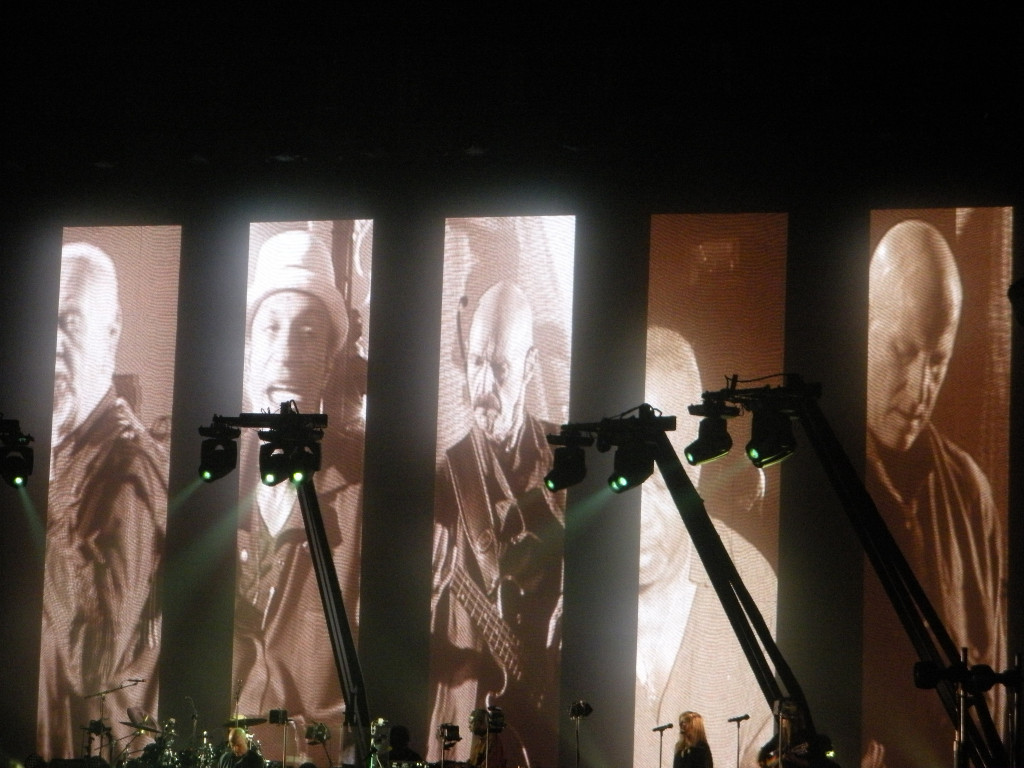 Tony Levin – the highly regarded bass player is most well known for his work with both Peter Gabriel and progressive rock band King Crimson. Much in demand as a session musician, he has played on over 500 hundred albums for artists including Alice Cooper, Andy Summers, John Lennon, Sarah McLachlan, Stevie Nicks, Pink Floyd, Dire Straits, Lou Reed, Tom Waits, Seal, Yes and Warren Zevon. Besides bass guitar he plays the Chapman Stick and upright bass.

Manu Katche – this French drummer and percussionist first gained worldwide acclaim for his session work on Peter Gabriel’s “So” and Sting’s albums “…Nothing Like the Sun” and “The Soul Cages.” In the years that followed, his unique drumming has been in demand and featured on albums by artists including the Eurythmics, Simple Minds, Dire Straits, Loreena McKennitt, Youssou N’Dour, Robbie Robertson, Joan Armatrading, Joe Satriani, Tori Amos, and Richard Wright. He has recorded his own albums as a band leader as well as toured extensively with other artists.

David Rhodes – Peter Gabriel’s “guitarist of choice,” this English musician first was invited to tour with Peter in 1980 with his band Random Hold. Soon after he left the band to work with Gabriel, a collaboration which has lasted for decades. He has also worked with numerous other artists including Roy Orbison, Tim Finn, Paul McCartney and Robert Plant.

David Sancious – An American keyboardist from Asbury Park, New Jersey, he was an early member of Bruce Springsteen’s E Street Band before leaving to record his own solo albums and perform with other notable musicians including Sting, Peter Gabriel, Eric Clapton, Stanley Clarke, and Santana.

Linnea Olsson and Jennie Abrahamson – members of Ane Brun‘s band, these two singers took over opening act duties when Ane herself had to cancel the tour due to illness. 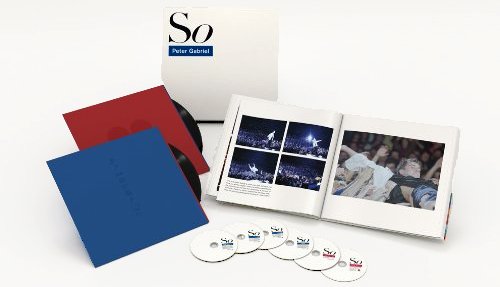 To celebrate the 25th anniversary of the release of “So”, Peter Gabriel released this new deluxe 8-disc collection full of previously unreleased material and remastered music and video. Fans of the album will surely want to get this extensive and impressive box set to discover “So” and Peter Gabriel’s live performances like never before.