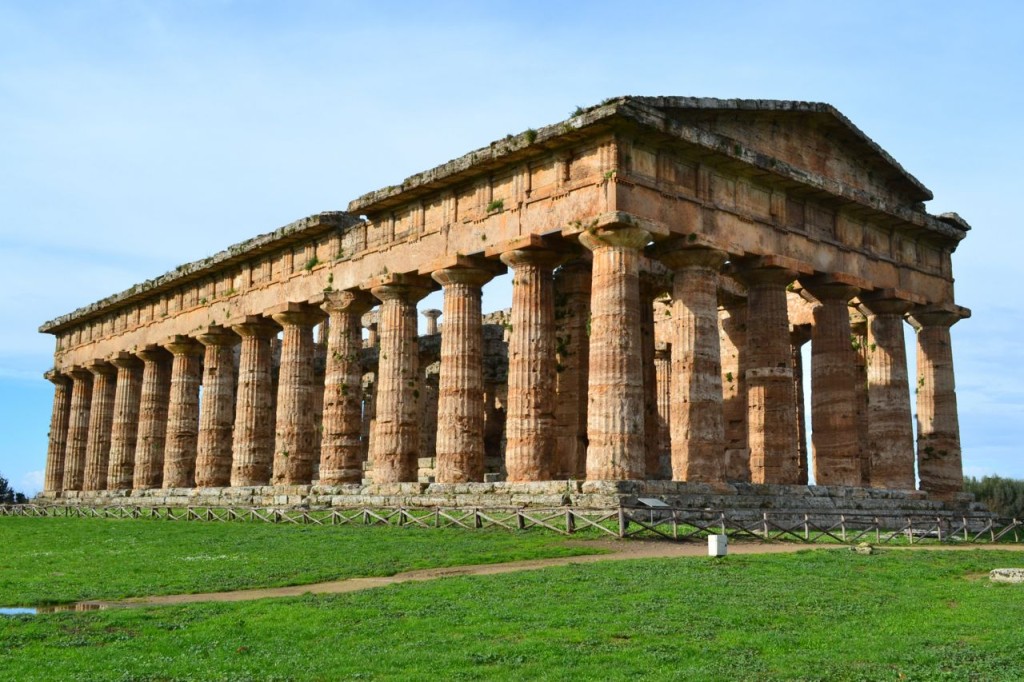 One of the three major temples at the ruins in Paestum. Photos on this page are by the author, sockii.

Usually when we talk of important archeological sites in Italy, we focus on Roman ruins: the Forum of Rome, the lost cities of Pompeii and Herculaneum, or the aqueducts and catacombs along the Appian Way.

But travel south of Naples, past Salerno and almost to the edge of Calabria, and you will find Paestum, once known as Poseidonia: a major ancient Greek city along the coastline. While later conquered and inhabited by the Romans, the remains of three magnificent Greek temples were left standing and are still there today. They are in fact the best preserved Greek ruins in all of mainland Italy.

A visit to Paestum is an absolute must for anyone traveling to Southern Italy who is interested in archeology and ancient Western history. The site can be visited just for the day, or you can spend more time in the modern seaside town of Paestum which is known for its beaches, gastronomy, and of course history and art. 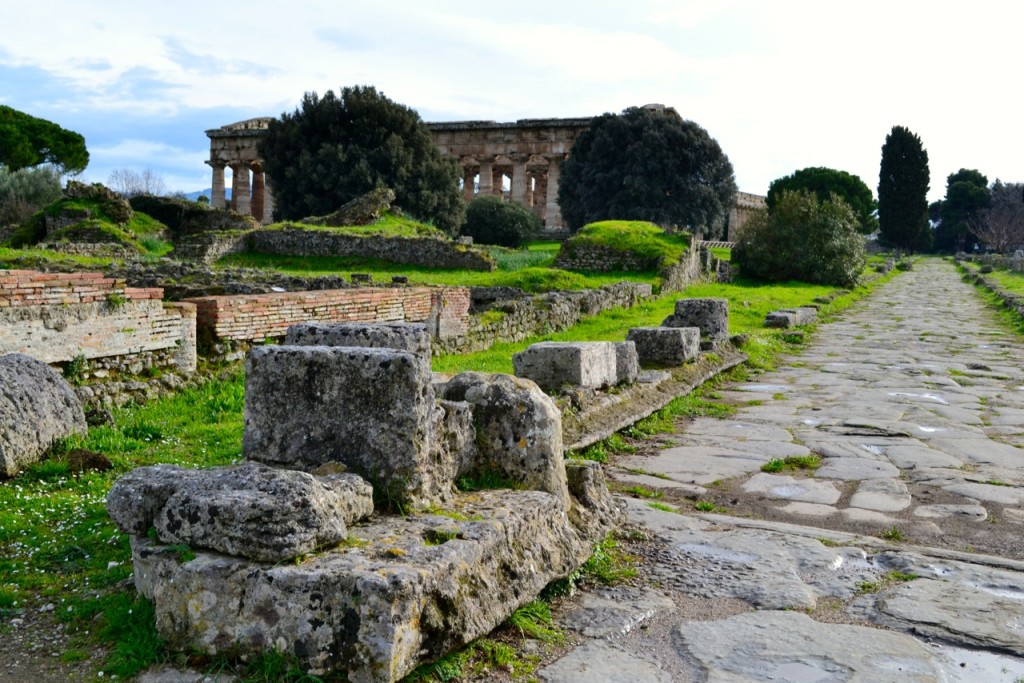 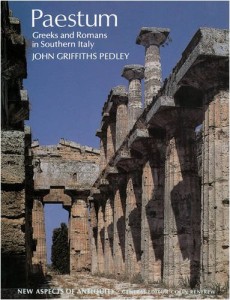 It is believed that the Greeks originally settled Paestum, then named Poseidonia, around the year 600 BC. The major evidence left of this settlement are the three Doric temples, the earliest being the first temple of Hera built circa 550 BC. Lucanians conquered the city around the end of the fifth century BC, but apparently the Greeks and Oscans coexisted for a time after that based on archeological evidence.

It became the Roman city Pastum in 273 BC, and continued to thrive and prosper through the Imperial period. However, the city began to enter a period of decline sometime between the 4th and 7th centuries and finally abandoned in the Middle Ages. This may have been due to changes in drainage conditions in the local area, which began to make Paestum swampy and therefore hazardous because of malaria.

It would not be until the 18th century that Paestum was “rediscovered”, as the excavations of Herculaneum and Pompeii began at that time. During World War II, Paestum would be used as a landing beach for the US infantry during the Allied invasion of Italy and significant fighting took place in and around the area. If you visit the Museum of Landing and Salerno Capitale, you can see images of the US troops in and around the temples of Paestum.

You can learn more about the ancient history of the city and the architectural design of the Greek Doric temples in the video below:

The three Greek Temples of Paestum 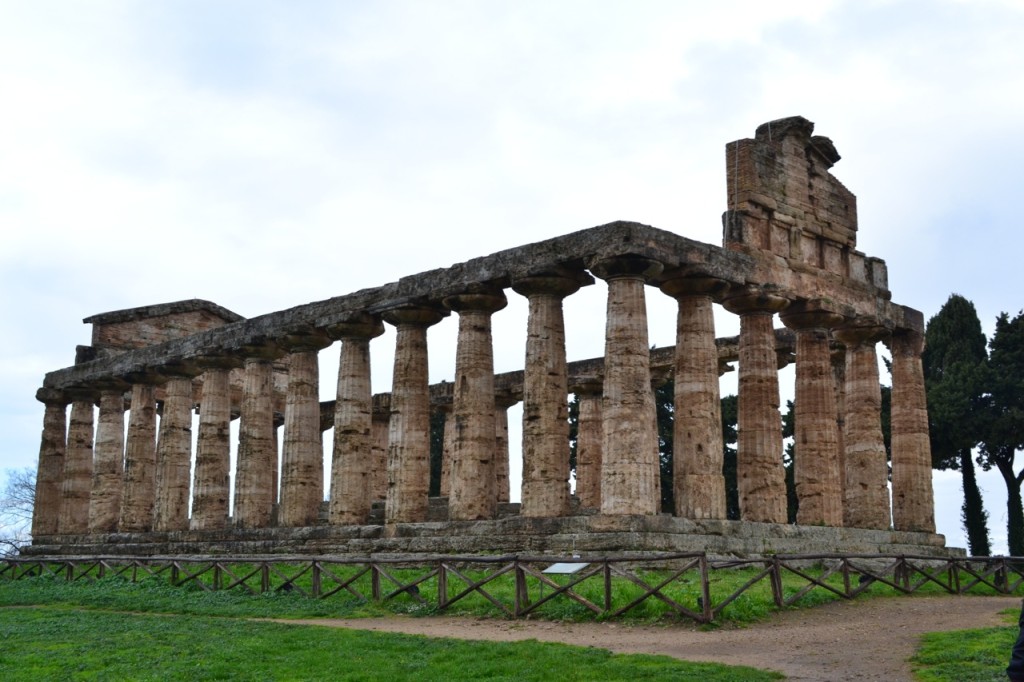 Upon entering the archeological park, the first temple you see is the Temple of Athena. 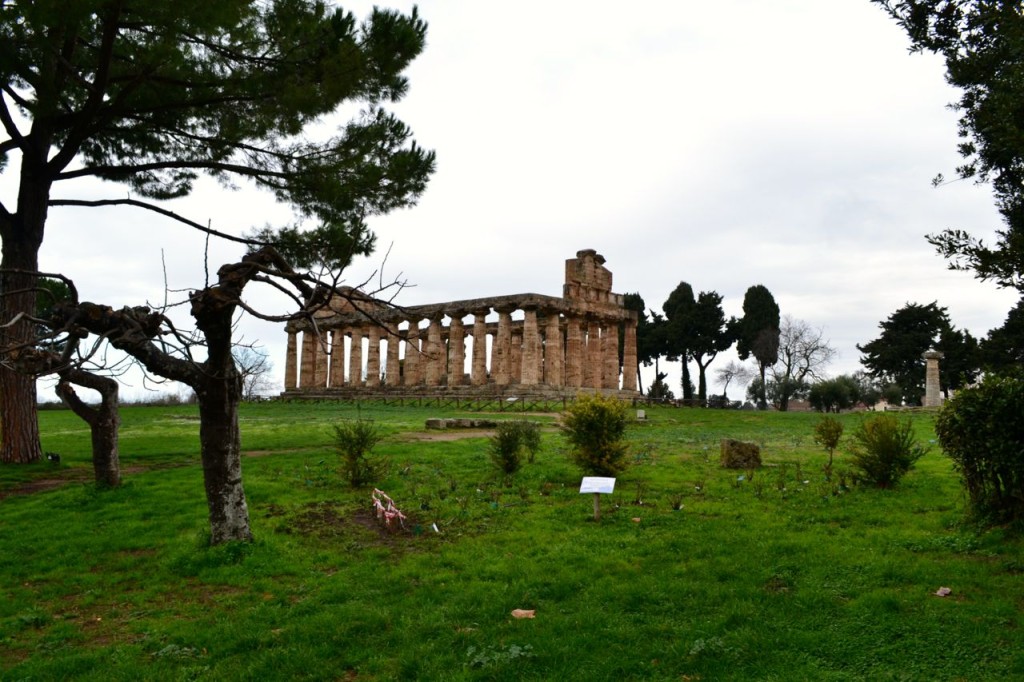 This temple was built circa 500 BC. It is set some distance apart from the others, at the highest part of town. 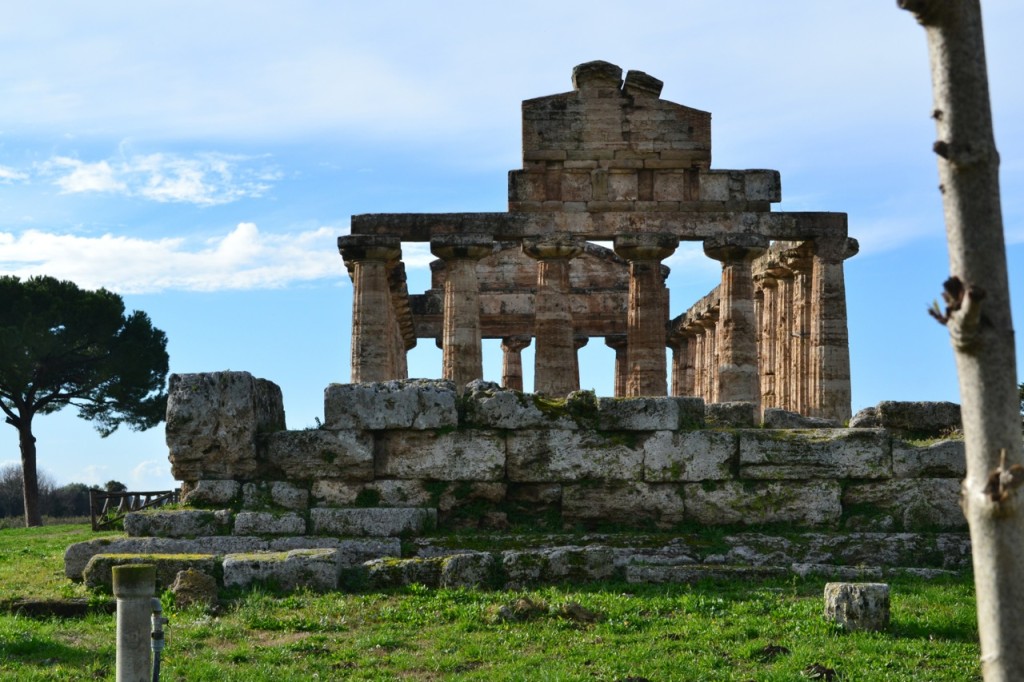 Christian tombs in the floor show that at some point of history, the Temple of Athena was used as a church. 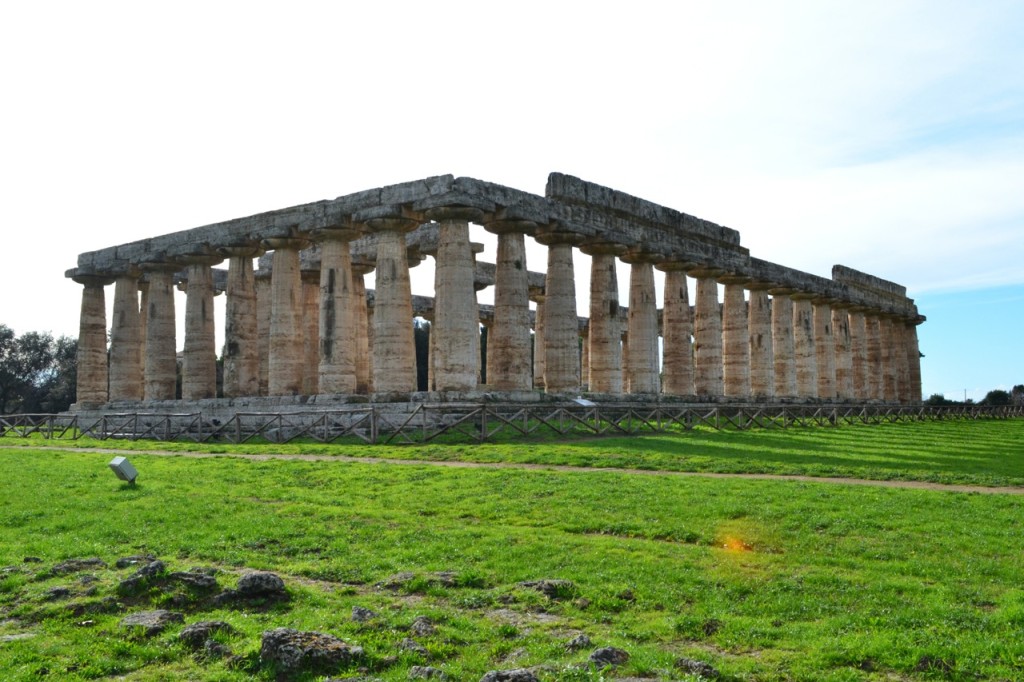 The first Temple of Hera is the oldest in Paestum, dating to circa 550 BC. 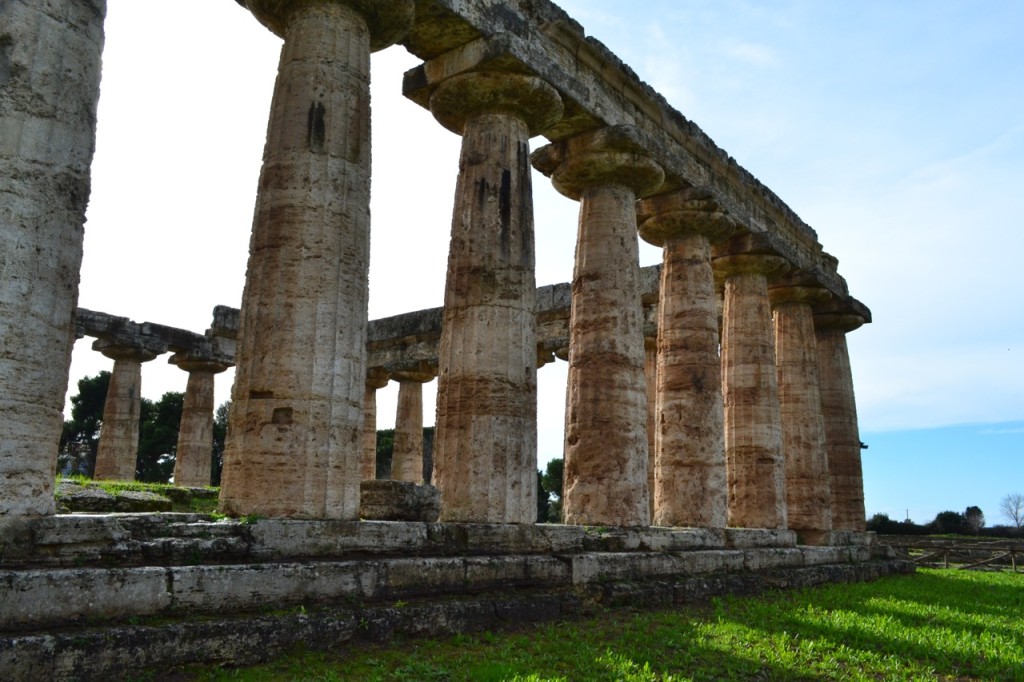 Originally archeologists believed the structure to be a Roman basilica, until inscriptions and an alter revealed the goddess Hera was worshipped here. 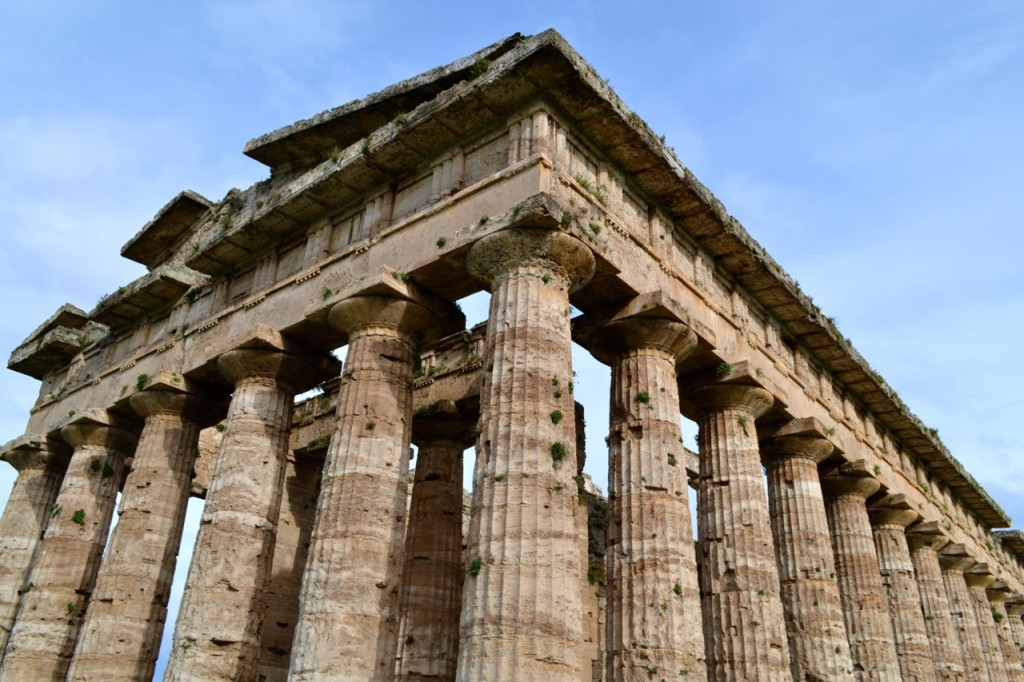 The second Temple of Hera dates from 460-450 BC, and is located close to the first temple. It was found to be used for worshipping other gods, including Zeus and possibly Poseidon. 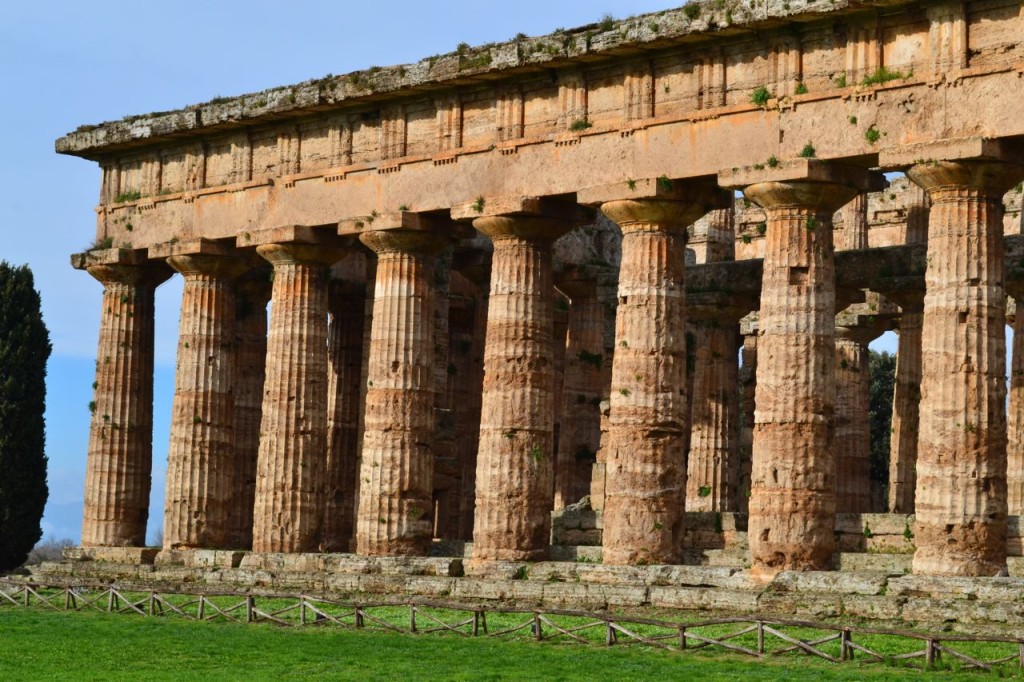 The incredible size of the temples is difficult to comprehend, and how ancient builders were able to construct these magnificent structures. 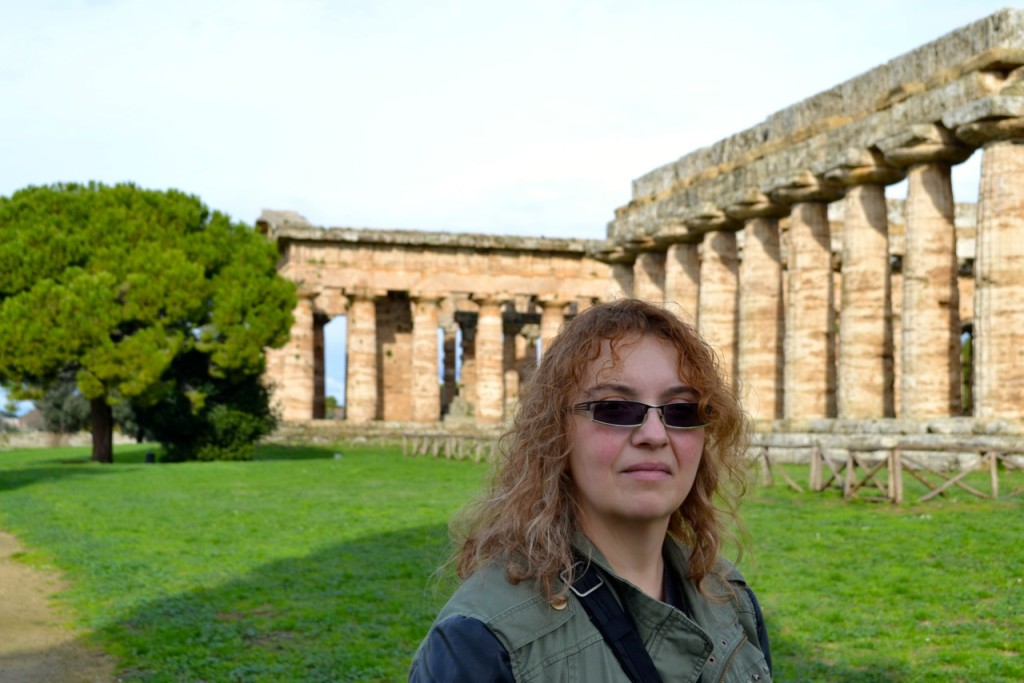 What a great spot for a photo opportunity!

Photos of the Roman ruins in Paestum 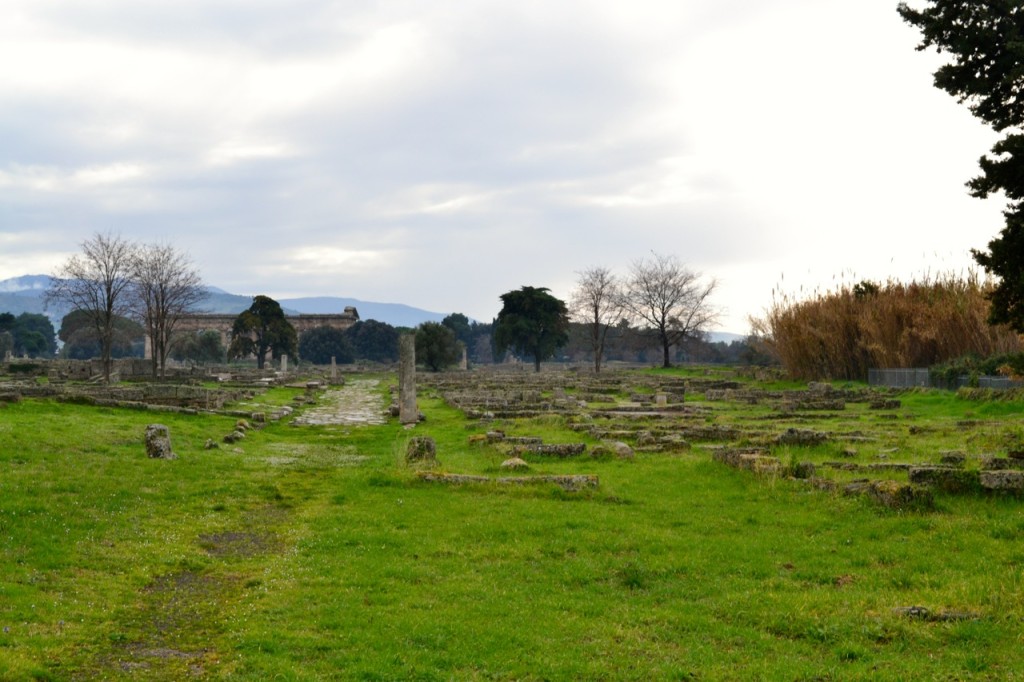 Walking away from the Temple of Athena, you see the first evidence of the Roman city (and the temples of Hera in the distance). 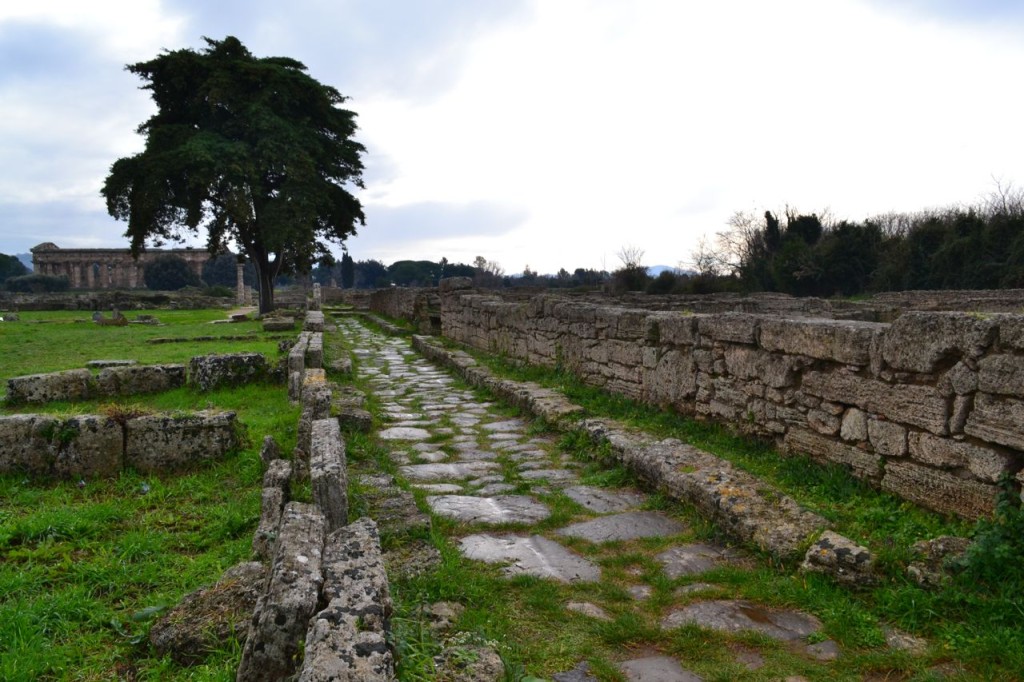 An old Roman road and remnants of buildings. 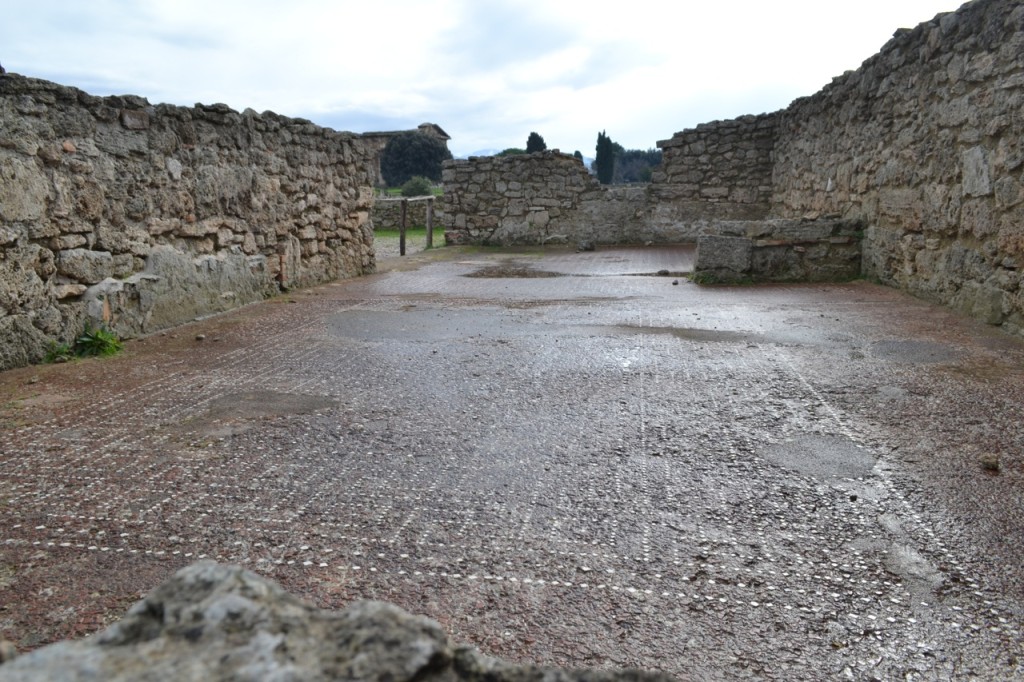 Even Roman tiled floors remain undisturbed amidst the ruins. 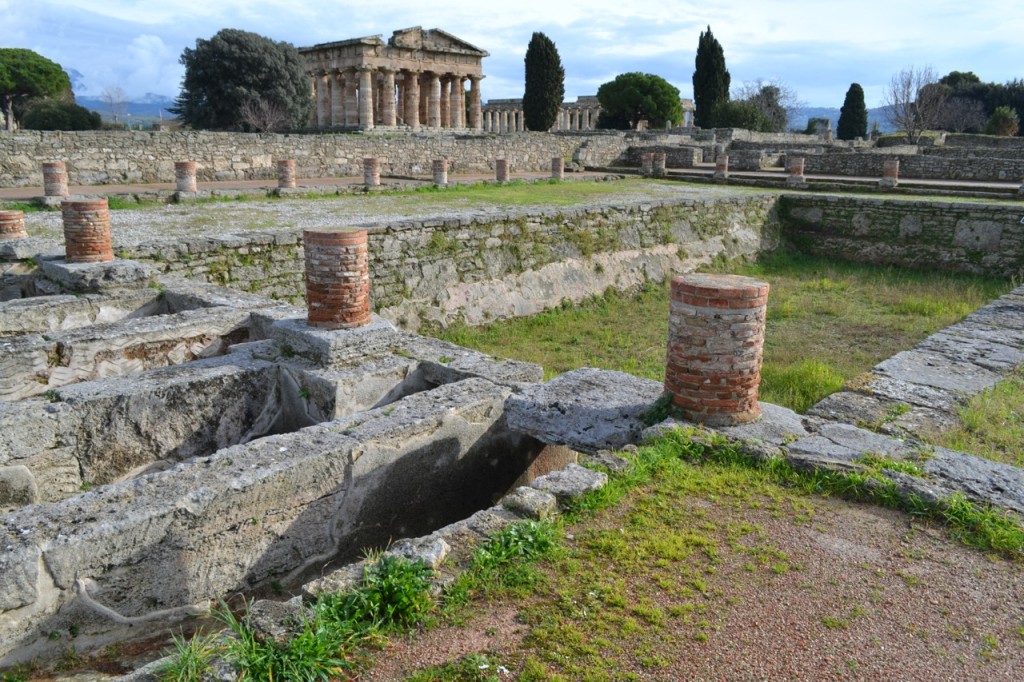 Believed to be a swimming pool, and part of a Roman gymnasium. 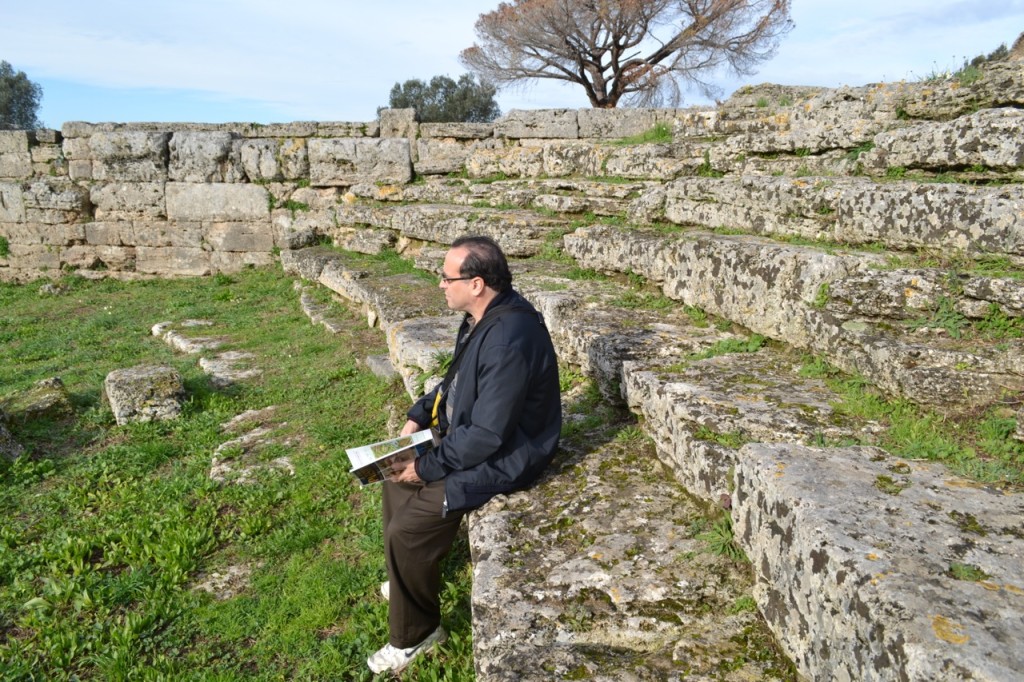 Take a seat: there are the remains of a Roman Comitium and Greek Ekklesiasterion used for meetings and discussions. 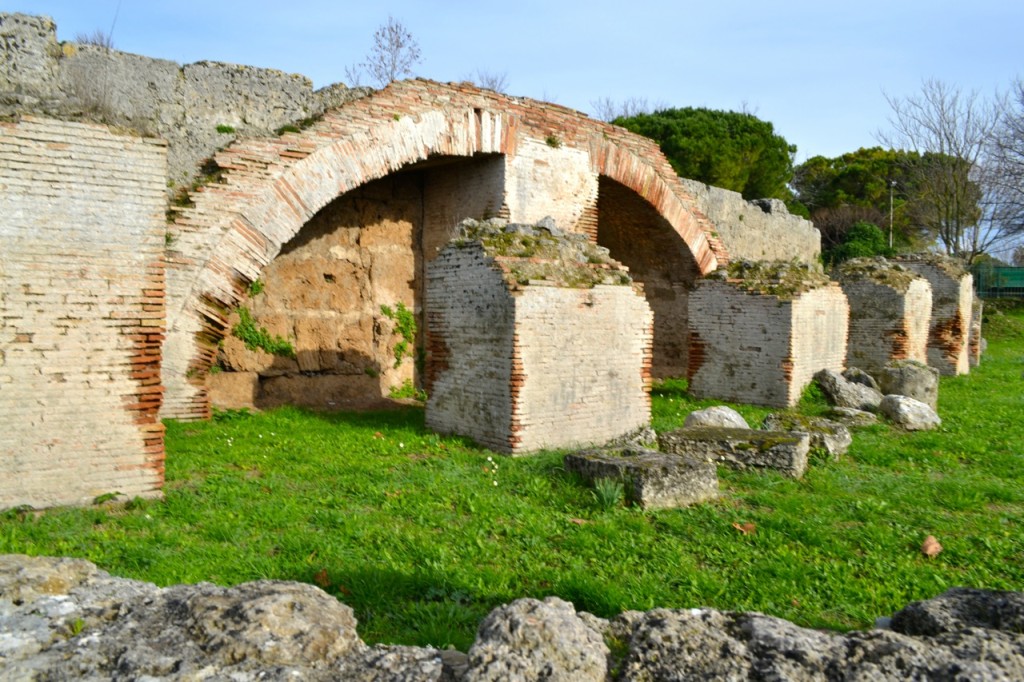 The Roman amphitheater is only partially excavated. A road was actually built over the rest of the theater in the 1930s, to much dismay and outrage… 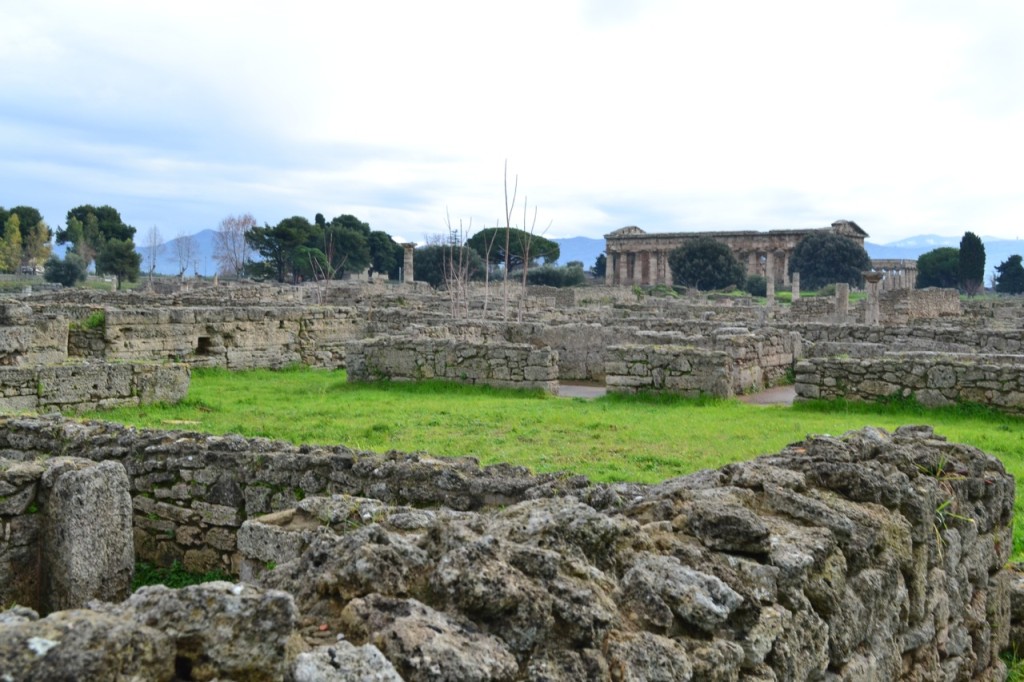 Visiting on a January afternoon, we virtually had all of Paestum to ourselves. Winter is a wonderful time to visit the region.

Planning a day trip to Paestum – How to get there, what to do 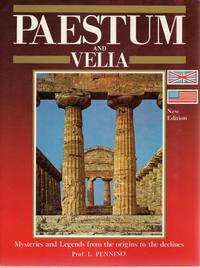 Paestum & Velia: Mysteries and legends from the origins to the declines. Book available by Amazon.

If you are mostly interested in the archeological ruins of Paestum, you can easily see what you will want to see in a single day’s visit. By car it is about an hour’s drive south from Salerno (see Google Maps) and a fairly direct drive at that (take the Battipaglia exit from the A3). Driving is also a good choice if you would like to stop along the way to sample some of the wonderful buffalo mozzarella produced in this region; Tenuta Vannulo is a fabulous organic farm along the way that offers tours and tastings. You may be able to hire a taxi or driver for the day as we did from Salerno, if you have not rented a car for your trip.

Otherwise, you can take bus or train services from Salerno to Paestum; Rome2Rio.com has links to available services. It’s just a short walk from the train station in Paestum to the archeological park. If you are staying in Naples you can easily catch a train to Salerno, as service runs regularly throughout the day and take less than an hour’s travel time.

Tickets for entry are sold at the Archeological Museum just across the roadway from the park. The cost is 7.00 Euro for entry to both (with reduced prices for those with an Artecard, and free for those under 18 or over 65). The museum and park are closed on the first and third Monday of every month, so plan your visit accordingly. The park is open otherwise from 8:45am until an hour before sunset. I would recommend visiting the museum first to get a sense of the history of Paestum and the many artifacts found on the site, some going back thousands of years!

As when visiting other archeological sites in the region such as Pompeii, it is advisable to dress comfortably with good walking shoes, rugged clothing, and to bring protection from the elements (a hat and sunscreen in the summer, a jacket and umbrella in the rainy winter). Show respect and tread carefully amidst the ruins, leaving nothing but your footsteps behind–and taking nothing from the site, either!

Near the museum and across the way from the archeological park you will find several small cafes and gift shops where you can shop for souvenirs, grab a quick bite or something to drink, and relax before heading back to your point of origin. 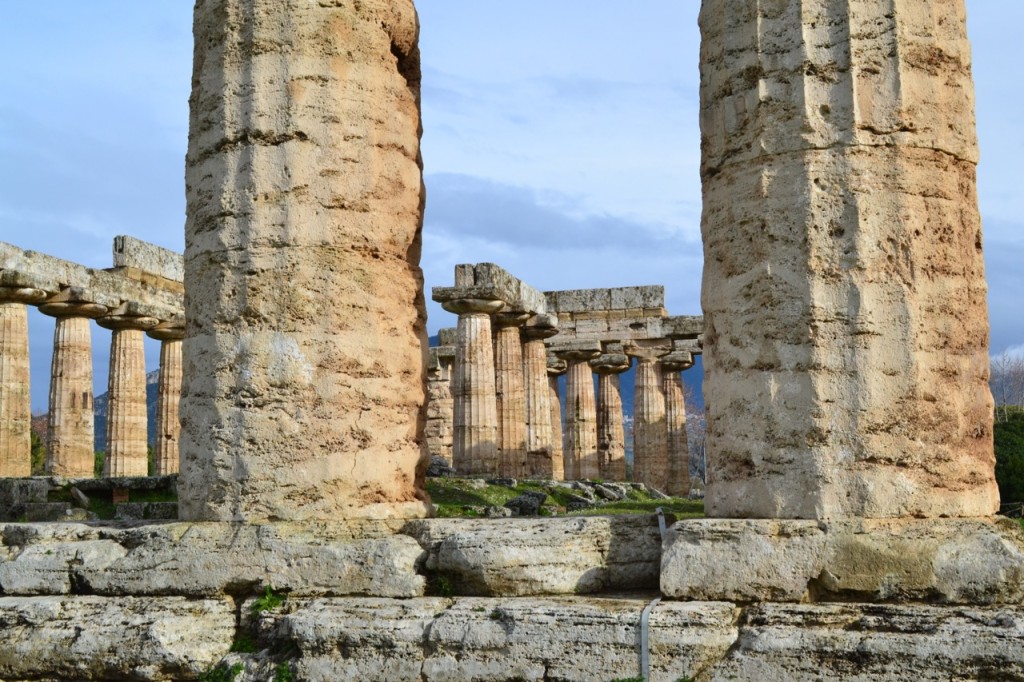 The temples at Paestum.

Other guides and resources on Paestum

My complete Paestum photo album – See it at Flickr 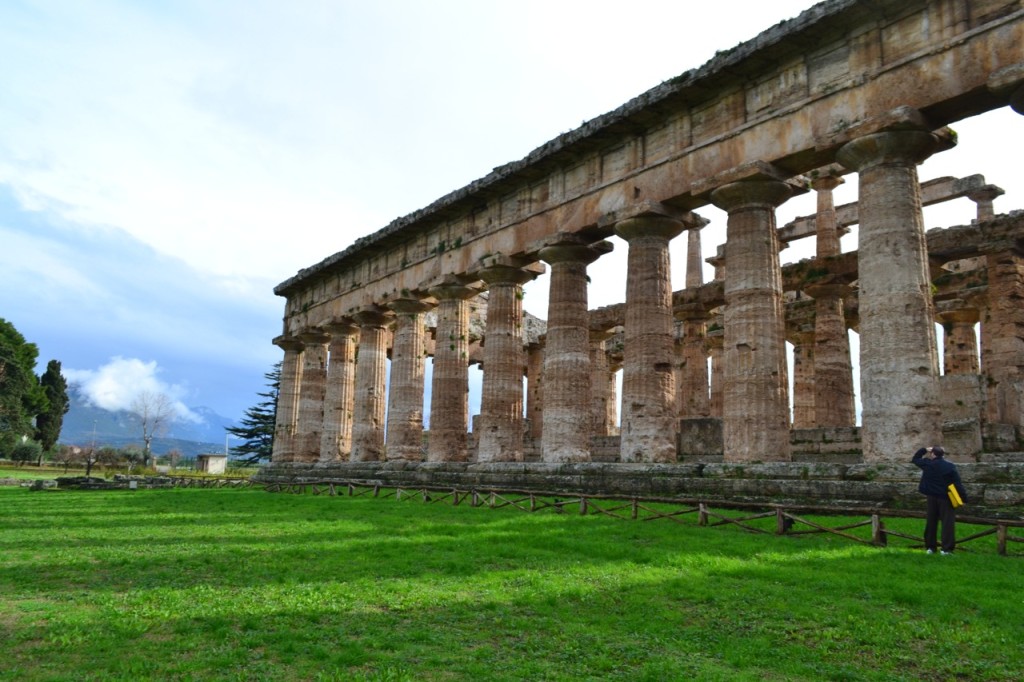 Touring Paestum on a January afternoon.

Want to see more? Then check out my complete photo album of Paestum – over 180 images taken in January 2014.