Has it really been over forty years since the debut of Schoolhouse Rock? Yes, it has!

On January 6, 1973, ABC premiered a series of short 3-4 minute cartoons that taught children about math, American history and grammar. Later on, they would include science into the mix. If you watched Scooby Doo, The Brady Kids or The Super Friends, then you surely remember the General Foods sponsored cartoons that were a part of our childhood.

They aired from 1973-1985. Even children of the 1990’s will remember these, as they came back on television for five years during this era.

Schoolhouse Rock: How It All Began

In 1971, Bob Dorough was a jazz pianist trying to make a living in New York City. To help pay the bills for his family, he also worked in advertising. His boss came to him with a dilmma-his sons could memorize songs by great rock legends, yet they could not master their multiplication facts. Dorough’s boss suggested that he put them to music. Although hesitant about trying a new genre of music, he came up with the first Multiplication Rock song, Three is a Magic Number.

These songs, which developed into Schoolhouse Rock, would be mostly written and sung by Dorough. The cartoons, which still enchant children today, are timeless.

As a mother, I have watched these cartoons with my children over and over again.

As a teacher with two degrees in Early Childhood education and almost thirty years of experience under my belt, I can tell you that music and learning go hand in hand. Children do not learn the ABC’s from flash cards…they learn to sing them long before they can recognize the actual letters. We teach them to count on their fingers with counting songs.

When my three children were young, I taught them their name, address, phone number and other vital information in a song that I made up just for them. They could always sing if they ever needed to share it with someone.

If I were to ask you what letter comes after “T”, almost all of you go back in your brain and sing the Alphabet Song even from the beginning or from a point near the “T”.

These examples demonstrate how music aids children with memory (and even adults!) They can learn new vocabulary, a foreign language and even history, math and science with a song that they want to hear repeatedly.

In no particular order, here are my favorite Schoolhouse Rock songs and videos.  Science Rock is not included on this list because it was not around when I was growing up. 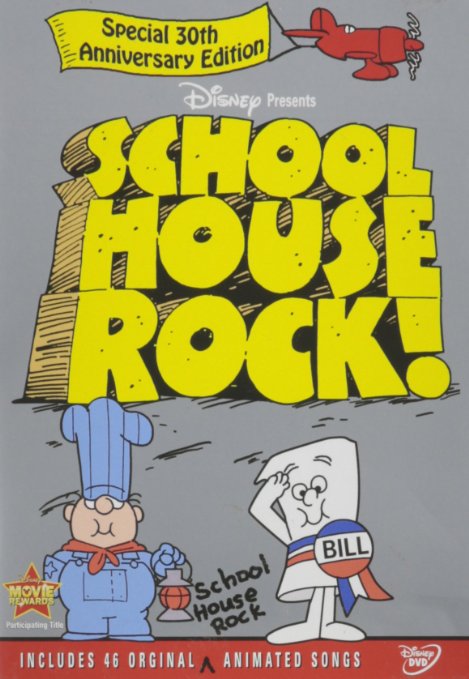 I grew up at a time when the feminist movement was in full swing. Women wanted equal pay for doing the same job as a man, and they wanted to go into careers that were not traditionally meant for women. There were glass ceilings to be broken.

That is one reason why one of my favorite Schoolhouse Rock videos is Suffering Until Suffrage. It was written in 1974 by Bob Dorough and Tom Yohe and performed by Essra Mohawk. When watching it, it seems kind of incredible that the lyrics tell how it had been only fifty years since women achieved the right to vote when this song was written.

I always know someone who is around my age when, if asked, they can sing the Preamble to the United States Constitution. Can you imagine just having to memorize it? How incredibly boring! But set to music, it became something we could discuss in Social Studies class! It was both written and performed by Lynn Ahrens.

Did you know that Bob Dorough voiced all three parts-child, father and grandfather-for this video? He just changed the speed of the tape to get the different voices. This is one of his favorite songs, and he wrote it after repeating the refrain “lolly, lolly, lolly” in his head.

be very boring if we only had short and choppy sentences. With the use of conjunctions like “and”, “but”, and “or”, we create compound sentences and our writing flows more freely.

Three is a Magic Number

This is the cartoon that started it all. Bob Dorough sings about the number three and how important it has been in history and items that we have that require three. It then counts by threes in song.

This song holds a special place in my heart. The lyrics I love:

A man and a woman have a little baby.

And that made three in the family.

I would snuggle with my older daughter and sing that to her, since she expanded our family of two to three, and the child in the cartoon was a little girl.

This classic tune was written by Bob Dorough and performed by Jack Sheldon and Terry Morrel.

Ah, the power of one small word and a punctuation mark. This Schoolhouse Rock cartoon shows just how powerful they are in our language. It was written by Lynn Aherns and sung by Essra Mohawk. The voice of the little girl is Lauren Yohe.

This list is by no means complete.  I could easily add Zero My Hero, Counting by Fives, The Shot Heard Round the World and many others.

Do you have any favorite Schoolhouse Rock Songs?  What are they?

The Voice Of ‘Schoolhouse Rock’ On The Series At 40

Featured image from Pixabay and altered by the author in Picmonkey.