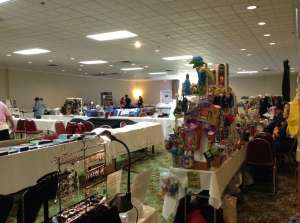 In the MediaWest*Con dealers room Sunday afternoon…already almost half empty as many dealers packed up early instead of staying through Monday. Photo by sockii.

2014 marked MediaWest*Con‘s 34th year as the self-proclaimed “definitive gathering of Science Fiction/Media fandom”, held annually in Lansing, Michigan over the Memorial Day weekend. I question whether that description truly applies any longer in today’s age of mega-sized media conventions such as San Diego Comic-Con and Dragon*Con—although MWC remains a “fans only” gathering with no celebrity guests, no autograph lines, photo-ops or other commercially-oriented events and programming. It may be one of the largest such conventions still operating today, but every year it does feel significantly smaller than the last, with attendees growing older and little if any effort put into drawing in new members. (In fact, there actually seems to be not just a resistance to drawing in new fans but an active effort to keep them away.) This year’s zombie theme, “The Walking Fen”, seemed particularly ironic for a convention that, in many ways, seems to be staggering along on its last legs.

The first MediaWest*Con—known at the time as MidWest*Con—was held in 1981.  By that time a schism had grown between traditional literary science fiction fans, who attended long-running conventions such as PhilCon, and Star Trek fans, who were seen as “invaders” in these literature-oriented gatherings. Star Trek fans had been holding their own conventions since the 70s, but 1977 brought a new “Force” into science fiction entertainment and media: the first Star Wars movie had been released to much excitement. Some Trek fans remained pure to their love for Captain Kirk and crew; others enjoyed the space opera created by George Lucas. Amidst the debate that ran between the two camps (which went on often in letterzines of the time), fans were beginning to want to gather, talk and create fanworks about other television shows like Starsky & Hutch and Man from U.N.C.L.E. “Media fandom” was the term coined to describe this newly evolving group of fans, and MediaWest*Con became the convention you went to in order to meet with those who were interested in all of these various active and emerging fandoms.

MediaWest*Con became popular for many features and activities which still are part of the convention today: multi-track programming, a large dealers room and art show, masquerade ball, live-action gaming, a video room and themed parties for different fandoms. The convention also hosts an annual “door decorating content” where fans decorate their hotel room doors in ways related to their favorite fandoms. Evenings at the convention in the past were often dominated by “hall crawls” to check out all the door decorations, see what fans were selling out of their rooms, and just checking in with everyone who was in attendance. It was also the convention to premiere new fanzines every year, some of which might be in such demand that they could sell out every copy brought by Thursday evening—before the convention even officially opened!

I first attended MediaWest*Con in (I believe, the memory is a little hazy) 1996 or 1997. I had only discovered media fandom as an organized “thing” a few years before and had become active in A-Team fandom online (the show had been one of my favorites of the 80s, and was seeing a resurgence of interest now that it was being aired in syndication throughout the United States.) The first few years I was there primarily to promote my A-Team and related fanzines, as well as selling collectibles and other merchandise. As such I came on the scene when the convention was well established and still very popular, although internet fandom and fan fiction archives online were beginning to take a cut into the “need” to go to a convention to discuss series and films, see new fan videos, and find new fiction to read. The number of members of the convention remains capped at 900 today, but I don’t think it has seen anywhere near that level of attendance at some time. The 2014 membership list contains a little under 450 listed members, including many “supporting/non-attending” and “apocryphal” memberships. Indeed, I find it hard to believe that there were more than perhaps 200-250 people at the con this year, based on my observations.

Coming to the convention first when I did in the late 90s, I also had the distinct impression that it was a very cliquish crowd of people who knew each other well already and were not especially welcoming to new fans—particularly if you weren’t part of one of the big “in” fandoms of the time.  I had a few very discouraging experiences that first year, including having my drawings in the artshow insulted to my face by a random fan while getting a constructive, positive critique from a professional artist. Incidents like that one kept me from wanting to go back at all, along with a still-strong “anti-slash” vibe from many of the attendees. In fact I skipped a few years until I actually became involved in a big fandom (Star Wars, after the 1999 release of The Phantom Menace) and had friends I made online who would be attending, so it wouldn’t feel so isolated being there. Sadly fewer and fewer of them seem to be attending any longer; some have left fandom behind, some are no longer physically or financially able to make the trip. Others simply see no reason to attend these days when the convention committee seems stuck on running things exactly as they did 20-30 years ago despite the many ways fandom has changed and moved on since then. 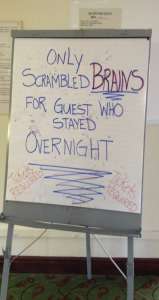 A sign outside the breakfast buffet at MediaWest*Con 34. Photo by sockii.

This may have been my last MediaWest*Con as well. I’m not nearly as interested in media fandom as I once was, and the fandoms I am interested in are not and never have been particularly popular with MWC attendees. I did attempt to go to one panel this year which actually looked interesting to me from the description (“Historical Series: do they have to be accurate or just entertaining?”) hoping we might be able to discuss a few of my favorites, such as The Borgias and Rome. But the lone moderator was doing nothing to keep two people in the audience from dominating the entire conversation, shouting down other viewpoints and just wanting to nitpick every small detail wrong with a few shows they had watched. I ended up walking out halfway through. Indeed, I talked to a few friends who said they don’t bother with panels at the convention any longer at all; either the ones they propose get shot down by the programming committee, or they don’t want to deal with certain people who are regular “panel spoilers” such as I encountered. They’d rather just go to the convention to have private chats in their rooms or over dinner about their favorite fandoms with friends, which tends to be what I do, also. Other attendees complained to me about the lack of programming on some of the hottest TV and movie fandoms of the day which should have definitely received some attention given their popularity online. Where, for instance, was any programming related to Hannibal, which was airing its season finale on the Saturday night of the convention and is one of the biggest media fandoms of the moment?

From a business standpoint, too, the smaller attendance and limited budget of attendees these days makes it hard for me to justify the expense of attending as well. My sales in both the dealer’s room and art show (where I primarily sell jewelry these days) were down by about a third, taking out most of the profit I could usually expect to make. (I heard several times of not having the money to spend freely now that many attendees are retired—nor do they need to buy fancy jewelry since they no longer have to dress up for work or other occasions!) With a twelve hour drive there and back to deal with, hotel and gas expenses, it’s become too expensive and labor-intensive endeavor for me to justify with the diminishing returns.

I’ve wondered, at each of the last five MediaWest*Cons that I’ve attended, how much longer the con can keep going. Every year updates before the convention get fewer and later distributed. This year in fact I did not find out until the day before I left for the convention that I could get a second dealer’s table if I wanted it; I only got notice of having a room in the host hotel a week before. Organizational issues such as these add stress and discourage many from bothering to continue attending. I’ll miss some aspects of MWC and some of the people I do see there every year, but perhaps when this con finally is laid to rest, some new fen will feel free to try something different to replace it. That is, if anyone still has any interest or motivation in attending such conventions in the future…

For more information on the history of MediaWest*Con:

* “A Brief History of MediaWest*Con”