At this point, half of the original 30 contestants for this season have been eliminated. With 15 home cooks left, the judges need to hone it down to only one person. Courtney feels that after last episode’s win, she’s got her “mojo back”.

It’s time for a team challenge once more, but not like previously. Instead of large team, they will be cooking in pairs. Leslie is asked who he wouldn’t want to work with, and he says Ahran. Willie laughs. Christian says the last person he would want to cook with is Courtney. Why? Because she isn’t real, he says. She doesn’t have passion.

Well, it looks like he’s in luck, at least, in that regard. Courtney is going to be picking the pairs, and she doesn’t have to cook since she won the last challenge.

There are 14 cooks and she is putting them into seven teams of two. The two worst performing teams will face the pressure test. The first person she picks is Christian, and she partners him with someone who will present a personality clash, she feels: Francis B.

The second team she pairs up is Elizabeth and Jaime. Then Victoria and Christine. Cutter and Dan. Willie and Daniel. Ahran and Leslie, of course. That leaves Elise and Francis L.

Each team will be making two very different components to come together in one classic pairing: a surf and turf dish. Victoria is amped up. Cutter is not feeling worried. They have ample choices from both “surf” and “turf”, from rib eye steaks and venison to snapper, crab and oysters. They have one hour to work together but only 5 minutes to decide what direction they are going in and to shop in the pantry.

They start talking and planning dishes. Joe thinks there will be a dominant member in each team. Dan and Cutter are talking about doing venison and tuna; Cutter brings up they are both very lean proteins that could be a problem. They don’t seem to have a clear idea what to do. Ahran has an idea using the pork belly and Leslie is willing to let her lead the way. Time’s up and Dan and Cutter definitely are lost—they have two proteins and only 7 items from the pantry while the other teams all have full baskets to choose ingredients from.

The judges start checking out what each team has planned. It’s pork belly wrapped monkfisk over green apple risoltto for Victoria and Christine. Christian and Francis B seem to be working together well. Francis L and Elise are doing blood orange foam, mint and lemon risotto, rack of lamb and crab—Elise seems out of her element with Francis L’s more “out there” techniques and ideas. Meanwhile, Dan and Cutter don’t seem to be on the same page with their dish at all, and Cutter is pissed off.

With half the time to go and Dan wants to “go zen” while Cutter is freaking out. Christian was seen as the prime target by Courtney, but he doesn’t mind. He thinks both his cooking and his personality is intimidating to the others, and especially to her. They are making a spicy pork belly and crab stack with fried rice…theirs actually looks really good, the judges think. Victoria and Christine seem to be doing well also. Francis B and Elise seem to be a weird pairing of styles.

Time is up and the judges are ready to taste each team’s creation. First up is Ahran and Leslie. They have a pork belly tostada with crab guacamole and kimchi fried rice. Graham says the flavors are great. Ahran says she now respects Leslie and that the partnership was a good stepping stone for them. Joe says their dish has a lot of things going for it and it’s harmonious…a marriage of two cultures coming together to make one delicious dish. Gordon says it’s delicious. It really works well. They definitely seem safe!

Dan Wu and Cutter are next. “What is the f— is it?” Gordon wants to know as he looks at their extremely bare plate. Gordon is so embarrassed. It’s seared venison loin on parsnip, and seared tuna on a 3-radish salad. Even separate it doesn’t work and it may be one of the worst dishes in the competition so far. Cutter tells Joe he doesn’t have to eat it and Joe gets mad; he’s a judge, don’t tell him how to do his job. Joe walks over to grab a trash can and tells Cutter to do the honors.

Francis L and Elise are next with their rack of lamb, crab risotto, yogurt and caviar dish. The lamb is nice, but the fat was not rendered enough. Visually it looks a mess. Gordon likes Francis L’s quirkiness but it needs the right time and place…this apparently was not it. Next, Jaimee and Elizabeth have lamb and red snapper with carrots and kale. Joe says it’s seasoned perfectly, the fish is delicate and light and it captures the spirit of the challenge. It’s the surf and turf concept on a plate.

Willie and Daniel are next. They have seared ahi tuna with buttermilk miso fried chicken. Their dish also captured the spirit of surf and turf. There’s maybe a little too much going on but the flavors are there and it has character, Gordon says.

Christine and Victoria follow with their pork belly and monkfish with green apple risotto. It’s a dish that’s flavor intensive and shows classic technique, the judges say. Christian and Francis B, meanwhile, have Moroccan-spiced rib eye and king crab. Gordon is underwhelmed…Christian feels they could have used a little more creativity. It looks like school dinner, the judges say. It’s bland. Maybe Courtney targeted Christian correctly?

So the judges had 7 pairs, and 7 dishes to choose from. One team created a phenomenal dish: Victoria and Christine. They are safe from elimination. Three other duos are also safe: Jaime & Elizabeth, Leslie & Ahran, Willie & Daniel. 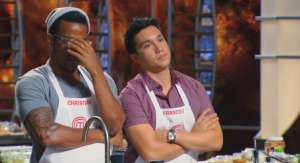 Screencap from the July 7, 2014 episode of MasterChef. Watch it now at Amazon Instant Video.

Leaves Dan & Cutter, Francis L & Elise, and Christian & Francis B in danger. But only two teams will be competing in the elimination challenge. Who is safe? The judges need a minute to decide. And the team that is safe is Francis L and Elise.

They’ve done surf and turf the judges tell them, and now they want a tough vegetarian dish: delicious, incredible spring rolls. Christian loves them but he’s never made them before. Dan was born in China so Cutter thinks this was a freebie thrown to him. They all have the same ingredients to work with: flour, eggs, hoisin sauce, plum sauce, togarashi, mirin and lots of veggies. Now they have 60 minutes to make 6 spring rolls and a dipping sauce.

The pastry is simple, only flour, egg and water. But their spring rolls have to be restaurant quality. Cutter has never made them before but he hopes to survive. He thinks Dan better nail his. Dan is using the pasta machine to make his wrappers, which may not be traditional but he thinks it will save him time. Francis B has to bounce back. Christian wants to get his in the fryer and get his sauce right.

Gordon is nervous is about Francis B. Joe is worried about Cutter. Christian looks in control. Cutter is freaking out as one of his spring rolls bursts open in the deep fryer.

Time’s called, and Dan thinks everyone else’s spring rolls lack finesse. Christian is first for tasting and he has red cabbage and green onion in his, with a spicy glaze sweet sauce. Graham says the flavor is great but he’d like some more even rolling. But they are better than average, no funky cabbage smell.

Next is Francis B with glass noodles, purple cabbage, and fresh sprouts in his spring roll. Joe says the ratio of filling is out of proportion and they are really greasy. The fryer might not have been hot enough and cold oil has penetrated them. They are out of balance.

Dan has vermicelli noodles and oyster mushrooms in his spring rolls, and the sauce is delicious. There might be too much casing, though, and Gordon says they are not the best. Too much dough.

Cutter is last. He has a pepper, carrot and bok choy filling with lemongrass and plum sauce. They are not crispy…all dough. Very sweet, no acid, no heat.

It was a hard pressure test…and at least one person is going home. The judges need a moment to chat and decide. When they come back, Christian is called forward first…his were the best by far. He is safe. Dan is called up next. They had high expectations for him, but his sauce is the only thing saving him tonight. At least one person is going home and it’s down to Francis B and Cutter, who are both in big trouble. Cutter…is leaving the floor and going to the balcony. Francis B is going home. His spring rolls were cooked twice, and the sauce didn’t make sense. He was a frontrunner but then he went into a “freefall”, so he is out of the competition.

This episode was ok, but seemed very predictable in the first half. Of course we’d see Ahran and Leslie succeed and “make up” after all the drama between them early on! (Although was their dish really that good, or was that just played up for the drama? Kimchi fried rice and a Mexican-style tostada seem like a bit of an odd combination…) I’m not sure what Dan is still doing in the competition at this point as he just seems lost and out of it most of the time; he hasn’t had a stand out dish since the very first episode. And beyond that, I was just confused why they kept calling what clearly looked like egg rolls “spring rolls“—they are two different things! And it was a bit uncomfortable to me how the judges kept going on about how Dan should nail the challenge simply because he’s Chinese and grew up in China…stereotyping much?

So now there are only 14 left and next week looks to be a restaurant team challenge set in a diner. Will the home chefs be able to cope with that kind of high pressure situation? I guess we’ll find out!