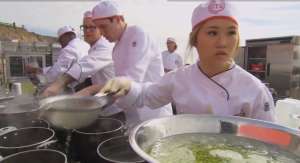 It’s time for the second team challenge of this season of MasterChef. The remaining 17 contestants find themselves somewhere along the coastline of California. Jordan talks a little bit about his past as an overweight teen—he’s ready for this challenge. Ahran wants to know if they are cooking for surfers. Courtney realizes they’ll be cooking for a wedding once they arrive at their destination and see the chairs and decorations.

Yes, it’s a wedding, and they’ll be cooking all the food. Elise is excited yet also terrified. The judges inform them they have to feed 120 guests. The theme of the wedding is “upscale ocean faire”: each team will do a scallop-based appetizer and sea bass entree. They must prep and cook for all the guests in 2 hours.

Leslie and Francis L are team captains as they had the best dishes last time around. Leslie gets first pick as Red Team captain and goes for Christian, for his leadership abilities. Francis picks Willie for fun in the kitchen. Francis B is Leslie’s next choice, then Courtney for Francis L. Leslie then picks Tyler, And Francis picks Cutter. Daniel is next for Leslie’s team, then Victoria for Francis B. Leslie then chooses Christine, Francis B picks Elizabeth, and then Leslie choose Ahran—she definitely does not want to be on his team and calls him out for mispronouncing her name. Francis then picks Dan, Leslie picks Jordan, and Elise is last picked by Francis B. That leaves Jaimee as the odd one out and on Leslie’s team. Francis thinks he’s got a good team which will work together well and that there will be chaos in Leslie’s kitchen.

Gordon is nervous because it’s early for them to have such a tough challenge so early on in the competition. The first challenge is going to be setting their menus. Francis L wants to do scallops with some kind of arugula, papaya, and pineapple salad. He seems to know what he wants and the rest are following his guidance. On the Red Team, however, it seems like a real free-for-all as everyone just tosses out ideas and what they can do. Leslie doesn’t want to take control; he just wants to hear everyone’s opinions.

The Red Team begins prep and the Blue Team has their idea for their sea bass: a beurre blanc sauce and purple cauliflower puree. The Red Team is still confused, though, when Gordon comes over to ask about their dishes. What exactly are they making? Leslie doesn’t seem to know.

It’s embarrassing, according to Gordon, and we see Ahran and Leslie still fighting. He says no one is listening to him.

Leslie is breaking down, by Daniel’s estimation. Daniel and Francis B get together and stage a “mutiny” to take over the Red Team. Leslie seems fine with that decision and they finally start coming together with their plates. That’s a good thing as the bride and groom’s scallop appetizers need to come out. The Blue Team has finalized their dish of seared scallops with arugula, radish and pineapple salad. For the Red Team its scallops  with pea and avocado puree and mango salsa. The bride favors the Blue Team dish as it has a lot of flavor. The groom likes the Red Team appetizer.

Now it’s time to plate out the other guests’ dishes. Red Team finishes the appetizer service on a high note while the Blue Team is having a hard time completing their orders. Their scallops are cold and need to be re-fired. Joe is getting feedback from the diners and it seems to be a close call. Meanwhile, the Red Team is having a problem with their sea bass plating. They ditched the potatoes they were originally going to use need another side in six minutes. They end up doing a tomato and cucumber salad along with their broccolini. The Blue Team is doing white asparagus, beurre blanc and purple cauliflower for their sea bass.

Jordan seems to have a moment of zoning out while the Red Team is trying to finish plating. When the first dishes go out, once again, the bride likes the Blue Team’s plate the best and the groom likes the Red Team’s. The Red Team is running into another problem now: they are short two portions of fish! Christian thinks Tyler ate them. They have to serve half portions at the end of their orders which doesn’t make the judges too happy.

Blue Team is confident they pulled it off, but in the reception area the reviews are mixed. The judges debate who did better as they’ll be making the final call—and the bride will toss the winning team her bouquet. Who gets it? The Blue Team. Francis L thinks this shows he is a serious contender now—he certainly managed to show some real leadership!

The Red Team has to clean up both stations and there’s a lot of tension in the air. Leslie wants to apologize to the team. Ahran starts to talk back to him and he starts giving her crap for being and acting like a teenager. It gets ugly until Ahran looks like she’s in tears. The girls are comforting Ahran while Leslie storms off after continuing to gripe to the guys on his team.

Well, after that stressful day, it’s time for a pressure test for the Red Team. Where did it go wrong for them, the judges want to know? Leslie says it went wrong from the moment he was appointed captain. Nine chefs were on the team but only three people are going to have to cook. The judges tell Leslie as team captain to pick who he thinks those three should be: Christian is his first pick, then Daniel, and lastly Ahran (whose name he mispronounces again, much to the dismay of the Blue Team members in the balcony.

Fortunately for Christian, Daniel and Ahran, it’s not Leslie’s decision to make! The judges are deciding who is up for the pressure test challenge. Each judge is putting up one person. Gordon selects Leslie. Graham picks Jordan. Joe picks someone who stepped up on the back of Leslie’s poor leadership but ultimately failed: Francis B. The rest of the Red Team are safe for now.

Leslie, Jordan and Francis B now have to prepare the quintessential American protein: steak frites. They want a steak that’s perfectly seasoned, perfectly seared, and perfectly medium rare—and don’t forget the shoestring fries! They have 30 minutes and only  limited ingredients and seasoning.

As they get started, Francis B thinks he’s the best cook of the three. But the judges notice he is starting his fries very early when that should be only in the last few minutes. Leslie thinks Jordan is going home and is confident he knows what he’s doing. Indeed, Jordan may not have his steak up on a high enough temperature to sear. Joe cautions Francis not to overcook his. It could be close.

The Blue Team and others in the balcony are giving tips to Francis B, much to Leslie’s chagrin. Is that really fair? Courtney is trying to tell Francis B how to make compound butter, and even Francis L cautions that it’s not necessarily a great plan to be giving help to one of their top competitors. Willie seems to be the only one who likes Leslie and is cheering him on.

Two minutes to go and the three are getting their plates finished. Francis B is torching his steak which seems bizarre, but the judges are also worried about the hard fat on Jordan’s.

Time’s up and now for the tasting. Jordan is happy with his, and thinks Leslie’s looks boring and underwhelming. Leslie is first for tasting. Gordon says it’s great color on the steak (though he takes off the raw herbs on the plate as they are unnecessary.) Turns out Leslie nailed the medium rare cook. The fries are soft and limp, however, which is not a good thing.

Graham will taste Jordan’s and thinks the fat hasn’t rendered. His cook is more medium than medium rare. It’s got a good flavor, though. The fries could use more color but they are seasoned beautifully.

Joe will taste Francis B’s steak. Is the temperature correct, he asks while cutting into it? Turns out it’s also more medium than medium rare. The sear is nice, Joe says, and the flavor is good…the fries have some thyme and toasted rosemary…they are good except for some bigger fries which are a little soggy. Now they have to decide who will continue on and who will go home.

The cook on the steak is the most important thing, it seems to the judges, so it sounds like it’s down to Jordan and Francis B and Leslie will be safe. Indeed, one cook did nail the steak perfectly: Leslie. He is in fact safe. That means it’s between Jordan and Francis B and it comes down to whose taste better: better seasoning, better fries, cooking with confidence…and that turns out to be Francis B. Jordan is heading home.

Jordan seems sad to go, but as Gordon tells him, he is only 19 so he’s got a whole life in front of him.

All in all this wasn’t one of the better episodes, that’s for sure. I really dislike the team competitions where it seems more down to who is fighting with whom than what ends up on their plates. And with 16 chefs remaining we’ve still got a long way to go getting rid of some of the “weaker” contestants, likely some of the folks we’ve still barely seen much of. And still, there is no one I’m really cheering for yet except perhaps Francis L. just because he does seem as “cool as a cucumber” and not taking things as seriously, and nastily, as some of the others.

Looks like next week’s episode should be a good one, however, so I’m looking forward to that!