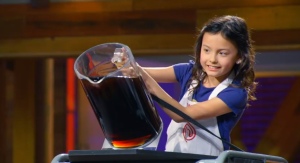 Last week we met the sixteen young contestants who would be computing in season two of MasterChef Junior, but four of them were sent home before the end of the night: Coco, Berry, Nasir and Isabella. That leaves twelve still in the competition: who will shine this week, and which young home cooks will be sent home? We’ll find out in this second episode as it begins.

Sean says it’s the most exciting thing he’s every done. Levi, 12, cooks almost every night for his family and doesn’t think there are many kids like him so he’s pretty confident about his chances to win.

The judges greet the young cooks and remind them that Oona, Samuel and Sean had the best three dishes last round. Now it’s time for a special challenge for these top three. It’s all about pancakes. Samuel is excited, talking about the exotic pancakes he makes for his parents. Oona seems less than thrilled; she is more of an Eggs Benedict gal, she says.

They have everything at their stations for making their pancakes: 12 burners at their disposal, a huge bowl of batter and one plate each. The judges want them to stack as many pancakes as they can on each of their plates in 6 minutes. The winner will get a huge advantage in the next challenge….and get to save one of the judges from a huge vat of syrup!

Each chef will be competing to “save” one judge from a sticky fate. Sean is working to save Joe, Samuel is working for Graham, and Oona is trying to save Gordon. Gordon is worried about his hair more than anything else, so he really wants Oona to win!

It’s time to get cooking. Samuel’s strategy is to move fast and not think about anything but the pancakes. Sean wants to make sure his aren’t underdone. But it’s harder than they thought as the pancakes will break if they don’t flip them properly, or before they are cooked all the way through.

Abby is rooting for Oona. Sean is getting intimidated by Joe. They have only two minutes to go and we hear from more of the young contestants as to who they are rooting for. Mitchell is rooting for Samuel so he can save Graham. Jessica wants Joe to be safe from the syrup because he’s her favorite. Abby is going crazy with the screaming and cheering for Oona.

Time is up and the three have to very carefully bring their plates to the front for the judges to evaluate. Oona is screwed; her stack is not nearly as big as Samuel’s or Sean’s. She only has 8 pancakes, Gordon counts with dismay. Samuel has 16. Sean has … how many? It’s a tough call. Joe counts and it turns out Sean has nineteen. Joe is going to be safe from the syrup!

Gordon is the first to get doused in maple syrup as Oona tips over her giant pitcher! Graham is next, doused in syrup by Samuel. Joe is so lucky…but everyone wants Sean to dump Joe in syrup anyway (of course we saw this coming)…and he does. There’s a brief moment of “hilarity” as the judges toss pancakes at each other and the kitchen is turned into a sticky mess. Talk about a waste of food!

Since Sean won the pancake advantage he gets an advantage in the next challenge, but first, the judges need to take a long shower.

And so they’ve had their breakfast sweets, now it’s time for some desserts…and in this case that means pie! Sean’s big advantage is he doesn’t have to cook in the upcoming pie elimination test, and he gets to chose between three different cream pies that the others will have to prepare.

The first cream pie is one of Joe’s favorites: rich and delicious, it’s the classic chocolate cream pie. It could be milk chocolate, dark chocolate or even white chocolate. It’s all about the filling and a crispy, crackling crust.

Next is one of Graham’s favorite: a fruit cream pie. Cherry, bananas, blueberries…all are game for this kind of pie. But it has to be cooked the right was so everything blends together perfectly.

Last is Graham’s favorite: a citrus cream pie. It could be made with any kind of citrus fruit, although he has an orange cream to illustrate the style. It’s a tricky pie to make because the balance of sweet and tart has to be there. But which will Sean choose?

Mitchell wants it to be the citrus pie. Levi loves chocolate and wants that to be Sean’s pick. Sean ends up choosing the citrus pie, because he thinks it will be the hardest to get the balance of tart and sweet correct.

It turns out Sean has another advantage tonight. He gets to choose one fellow competitor to share the citrus pie Gordon has given him…and to be immune from elimination with him. Who does he choose?

He chooses someone who thinks would get through the challenge anyway, because he’s heard they are good at cream pies…Mitchell. That’s a pretty smart move, I have to say. (Now if only some of the adult MasterChef competitors could be that wise…)

Levi is pretty confident about the citrus pie challenge; he’s good at baking. They have only one hour to make a stunning citrus cream pie and it’s time to pick their ingredients. Oona is doing a cream pie with blood oranges and is pretty confident. In fact many of them seem to be sure they can pull this off.

The pastry crust is a key, Gordon says, and then the flavor. It’s a tough one for sure. Samuel is making grapefruit and rosewater pie. Abby says she usually makes pie with her grandmother and she thinks she will nail her blood orange pie…but she doesn’t want Gordon distracting her. Levi is making a key lime pie with coconut whipped cream. He thinks Oona is the strongest still in the competition at this point.

Josh is doing key lime pie. He’s happy with his cream, although it might be a little sweet according to Joe who gives it a taste

Adaiah is doing orange, lemon, and raspberry pie. She seems confident as she comes from a long line of Southern bakers, she says. This seems right in her comfort zone.

Fourteen minutes to go and Natalie is doing a grapefruit coconut cream pie because she got the wrong fruit – she wanted to do orange!  There might be something missing from her fruit, the judges say. Jessica  is doing lemon key lime pie. She’s confident, too, because she’s won awards in the past for her baking at Texas state fairs. Logan is doing lime and raspberry for his pie and he is confident; he may be the next Graham Elliot!

The judges debate who is looking good and who is struggling. Josh may be in the weeds, but Adaiah is doing well, the judges think. Time’s called and now it’s time for tasting.

Samuel is first with his grapefruit cream pie with rosewater, nutmeg, pistachio and mint dust. Will his tricks work? Last time it was foam, now he’s doing dust. Graham says it’s a little heavy handed on the nutmeg and the filling a little too spicy, the cream needed to be whipped longer as well. Joe wants to know about the exotic spices he’s chosen. Graham thinks there are a lot of flavors going on and it needed a little longer on the crust. There’s a lot of whipped cream toward the center. Maybe next time he should have taken two things off the plate.  For once Samuel seems a little humbled, that he may have gone overboard in his gourmet aspirations.

Next is Logan. His crust is ugly but it’s all about the flavor…isn’t it? He’s made a raspberry twisted lime pie. It’s not visually the prettiest, Graham says, but it tastes delicious. Nice and tart, although the crust could have used a little longer in the oven. Joe says it’s delicious, and the extra raspberry on top is like a punch in the nose. Really delicious, Graham says, he just wishes he’d had a little more time to finesse the pastry.

Sam is next with blood orange cream pie. He bakes a lot of pies every Thanksgiving, he says. The crust is a little sloppy, but everything else is spot on.

Next is Adaiah. She’s confident with her blood orange lemon pie with raspberries. Graham says it’s very nice, even. All in all a great pie and she should be really proud.

Josh has his key lime pie. The crust, he had a little trouble with it he admits. It didn’t cook all the way through. Graham does love the whipped cream on top and the actual pie is pretty good except  for the crust.

Next is Natalie. She is scared with her grapefruit cream pie with coconut cream frosting. The grapefruit was a mistake, for sure…it’s not that really distinguishable, and what Joe mostly tastes the raw pastry dough. A little bit of a strange combination.

Abby is next with her blood orange cream pie with apple butter whipped cream and jelly beans as a garnish. Visually it’s a little bit uneven but it’s so weird…she’s only eight years old and been cooking since she was two…and it’s absolutely delicious, the judges declare. It’s a great job, a great pie to send “shockwaves” up to the balcony.

Next is Levi with his “out of control” whipped cream. It’s key lime pie with coconut whipped cream. It’s creative, Graham says. And there’s a nice proportion of cream to filling. Finally, some much needed acidity in a citrus pie! It’s one of the best.

Last up is Jessica with her citrus Texas pecan pie with key lime, lemon and orange. The crust is a little uneven, Joe says. There might not be quite enough cream, either. Joe wants more key lime because it’s a bit too sweet.  Gordon thinks it needed more consistency in the filling. It’s not bad but it needs more punchy citrus flavor and fewer nuts.

Now it’s time to see who had the best – and who had the worst – pies. It was a difficult task and the judges need to discuss who is staying and who is leaving.

The two standout pies were Levi and Adaiah’s. The judges next call down Sam, Josh, Jessica and Natalie. Unfortunately they had the four worst pies. It’s really hard for the judges to make the call. Sam and Josh are called forward. They are not going home tonight. That leaves Natalie and Jessica, whose journeys are over now in the MasterChef kitchen.

Thus ends the second episode of season two of MasterChef Junior, as we go from twelve young cooks to only ten. Who will stand out next time? Looks like we might get a team challenge this week as we have two on top this time. We shall see!