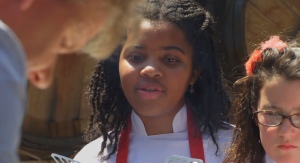 Screencap from the December 3 2014 episode of MasterChef Junior. Watch it now at Amazon Instant Video.

There are six contestants left in the MasterChef Junior competition this season: Abby, Samuel, Sean, Adaiah, Oona and Logan.

Logan thinks it’s amazing to be here at this point. Oona thinks she is underestimated because of her size. We should know by now that the contestants spotlighted early on in an episode are likely going to be in trouble and perhaps next on the chopping block, so does this mean it could be either or both Oona or Logan this time?

Their guests will be elite restaurant chefs, bloggers and critics, and they are going to be cooking in teams of three. At least two people are going home. Samuel and Abby are team captains since they had the best dishes the last challenge. Abby will be the Red team, Samuel the Blue team. Oona wants to be on Samuel’s team. Samuel gets first pick and he chooses Sean. Abby picks Adaiah. That leaves Oona and Logan. Samuel is going to pick someone who is efficient, he says: Oona. That means Logan will be on Abby’s team.

Their diners will have a choice between two appetizers and two entrees which have been selected by the judges. Stuffed squash blossoms with goat cheese and pomegranate is the first appetizer, which Graham is showing them how to prepare. Santa Barbana spot prawn ceviche is the other, and Gordon shows them how to prepare them.

Loup de mer filet is the first entree, served with fennel, pea tendrils and a vinaigrette. Filet Mignon is the second entree, with potato stacks, mushrooms and Bernaise sauce. Logan is worried Abby isn’t paying close enough attention and taking notes on what they need to do.

There’s one more part of the challenge the judges haven’t revealed: Gordon is going to be expediting from the kitchen. Abby isn’t too happy about that! They have one hour to prep for cooking before service begins.The judges debate who will be the best team leader. Samuel takes a strong leadership role, they observe, while Abby is struggling to be heard. She doesn’t think Logan is seasoning the ceviche enough and Logan isn’t listening to her.

The guests start arriving. There are forty guests in total and half will be served by each team. The diners’ feedback will help the judges decide which team wins. The guests are people in the restaurant industry, food bloggers and other supposed culinary VIPs in the LA area.

The orders start coming in and it’s pretty nerve-wracking for the young chefs. Sean has never worked like this before and it’s so stressful. Blue team’s plates are looking great. The ceviche looks good but Oona is having problems with squash blossoms. One of them is finally ready but it looks terrible, Gordon says. The fried blossom is not colored properly and it’s a greasy mess.

The other appetizers can’t be served until the squash blossoms are done. Meanwhile, Logan is still struggling with the seasoning on the ceviche.  It’s way too salty now. Logan is really worried now about holding his team back. After a little pep talk from Gordon, Logan seems to have his confidence back and his seasoning under control.

The Red team is communicating better and moving appetizers out. Blue team is still slow because of the squash blossoms. Samuel is doing everything, Sean is shut down and they are way behind. Graham has to step in to show Oona how to get the squash blossoms done properly. Finally they have appetizer plates going out to their tables. The Blue team has gotten one good review but now the waiting diners are getting anxious.

Blue team is getting things out and Samuel seems really in charge. Meanwhile Abby has stepped up and is getting plates out. But is Adaiah getting overwhelmed on the filet? She’s never cooked them before and she’s having a hard time getting perfect medium rare. One Red team steak came out more rare than medium rare. The Blue team is getting good reviews on the steak. Both teams seem to be getting positive comments on the fish. Service is backed up on the Red team while the blue team is now done.

Some people are almost ready to walk out as they’re down to their last table on the Red team, still waiting for their entrees. Have they actually run out of an ingredient? Nope, they manage to pull it together and get service finished. So perhaps the Red team won the appetizers while the Blue team did better with entrees. Which team will win, however? The judges taste the entrees and like Logan’s loup de mer’s better than Samuel’s which is not as even, maybe even a little soggy. The seasoning is okay but the Red team’s is “lightyears ahead”.

The Red team filet mignon, prepared by Adaiah? It’s a medium rare, which is good. But there’s no reasoning, however. Blue team’s looks clean, very “restauranty”. And it’s got a beautiful cook. The seasoning is excellent, Sean did good on that one. The VIPs get comment cards to fill out to give their feedback on the dishes as well. The winning team will move on to the semi-finals while the losing team will see “at least” two people go home.

The judges bring the young chefs out to meet the diners, who give them a round of applause and also ask them some questions about their experience so far on MasterChef. The winners will be announced the next day after the judges have a night to sleep on it. It seems really close, so who will win?

Everyone is back in the MasterChef kitchen the next day to find out the results. Red Team struggled with the ceviche but overall it was a good job. Blue team apps were slow but entrees were good. Which team is going on to the semi-finals? It’s the Red team: Abby, Adaiah and Logan. They stuck together as a team and the feedback from the diners was “extraordinary”.

But not all of the Blue Team will be leaving tonight: one person will be safe. Who is it? The judges say it’s the hardest decision they’ve had to make all competition. The one young chef moving on to the top four is Samuel. That means Oona and Sean are going home.

Personally I was not thrilled with that decision. It was clear that Sean did an excellent job on his entree, the steak, while Samuel did not do as good of a job on his entree and was struggling at times staying focused as a leader. I would have much preferred if the Blue team chefs had been given a chance to have a “cook-off” to compete for a spot in the semi-finals, instead of it being a 2 out of 3 automatic elimination, which just seemed too scripted to keep Samuel in the competition. In the adult MasterChef that’s always the way things are done in team competitions! I also felt like it dragged on too long with the “pop-up” challenge; I would have preferred seeing that edited down so they would have time for a second challenge this episode.

But, as it is that leaves Samuel, Abby, Adaiah and Logan as the final four. I have a strong feeling that they are setting up a Samuel versus Abby finale: the youngest girl verses the older, often obnoxious (at least as edited) boy, so they can have Abby win the title. At least that’s my prediction now; will MasterChef Junior prove me right? I guess we’ll find out soon…