The final four battle it out in the semi-finals 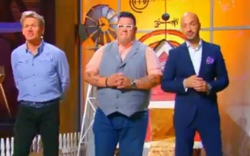 It’s been an amazing journey for the young contestants on the first ever MasterChef Junior US! Last week, the top six competed in a “restaurant takeover” challenge which ended up sending Sarah and Gavin home. That leaves Dara, Alexander, Troy and Jack competing in the semi-final round this week.

And it’s not going to be easy for them in this episode – and having an advantage can often prove to be more of a curse than a blessing, as regular watchers of MasterChef know. Who will break under the pressure, and who will shine and succeed? If you missed the episode, read on for my recap and review – and then give your opinion on whether you think the judges made the right call in which two they picked for the final battle.

Jack, Dara, Troy, Alexander: they’re all amazed at how far they’ve made it, and that they’ve returned to the MasterChef kitchen to find a barnyard-like set-up complete with live chickens clucking away! They’re all hoping that they won’t have to kill one of the birds, and that seems a given – they’ve never even made the adult MC contestants do that. The judges reveal that the chickens are there to help them determine who will be going on to the finale. Which came first: the chicken or the egg? For these contestants, it’ll be eggs first, and then the chickens.

They each need to make a perfect soft-boiled egg. Timing is everything: it can’t be hard-boiled and it can’t be raw, Gordon explains and demonstrates. When they think their egg is perfectly done, they will bring it up to the judges for tasting. They each have a pot, one egg, one slotted spoon, and a timer. Nothing else. Oh, but that’s the trick – they don’t have a timer at all – and the kitchen clock isn’t working! They are going to have to use their best judgement in getting the timing right.

The judges debate how to prepare the egg: is it four minutes or seven minutes, and in what kind of boil? And how do you do it without a timer? Alexander is trying to count in his head, so is Dara. Troy has no technique for this but he’s trying for four minutes. Jack is “praying to the egg god”, staying calm and focused as he counts the time.

Troy is the first one going up to the judges with his egg. Dara and Alexander are next. Jack is the last one up. Time for tasting, and Jack is first. Graham cuts into it, the white feels a little firm and the yolk is a little overdone. Dara is next, and Joe asks how long she cooked it. She was going for three and a half minutes, but it came out hard boiled. Alexander is third and he has no idea what’s in that egg. His gut is telling him that he nailed it, and he was also going for three and a half minutes. Cutting off the top the white looks firm, and the yolk is firm as well – it’s also been hard-boiled.

Troy is last and so far no one has managed to get the egg cooked correctly. Troy was the first one to take his out of the water, so he’s hoping it’s good. He was aiming for a four minute cook. The egg white is firm, and inside the yolk is runny. It’s not perfect, Gordon says, but it’s the closest of anyone’s. Therefore Troy has won the challenge, and he’s ready to use whatever advantage he can – to knock Alexander out if he has his way! 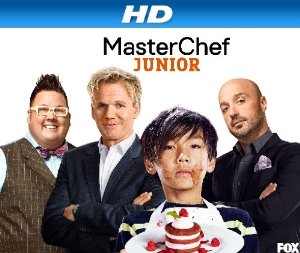 Their are four different cuts of chicken available.  Troy gets to choose which cut he gets to use, and which part the other competitors will get. The choices are chicken breasts (which Alexander wants to get), chicken thighs, chicken wings and chicken livers. Jack is scared of the liver – and none of them like it. (More the pity – I love chicken livers!) Troy takes the thigh. He gives the livers to Alexander who says “I’m going to kill you.” He hasn’t cooked with them or tasted them before. Troy gives the chicken wings to Dara and gives Jack the breast because he’d like to get to the finale with him – thinking he could easily beat Jack if that’s the match-up.

The two people with the best dishes are moving on to the finale. They will have one hour to cook. Dara says it’s a big mistake Troy gave her the chicken wings, she knows exactly what she’s going to do with them. The judges debate what they would do with the livers, which can make for some of the most delicious dishes, they claim. Troy is doing pan fried chicken thighs with Romesco sauce. Dara is doing soy-glazed chicken wings with Asian style vegetables. Jack is doing a goat cheese and sun dried tomato-stuffed chicken breast,  wrapped in prosciutto and served with asparagus.  Alexander is cleaning his livers and has bread on his station. He’s making chicken liver pate over garlic crostini and has no idea how it’s going to come up. Jack seems confused about what he’s making as he keeps running into the pantry for more ingredients. Has Jack gone too complicated? Gordon seems to be concerned that he doesn’t quite know what he’s doing.

Troy is only cooking one chicken thigh, Joe observes. Is he being too confident in not making a back-up in case it doesn’t cook properly? Dara is confident that her wings are going to be gourmet enough to get her to the final. With 20 seconds to go they are busily plating their food.

Troy is first up for tasting with his chicken thigh with Romesco sauce, served with spaghetti squash and zucchini salad. Gordon says it looks beautiful – personally I think it looks a little clunky and amateurish, not as finessed as the other dishes. The sauce is very fresh and delicious, Gordon says.  He slices through the thigh and unfortunately finds it’s still raw inside. A thigh takes a minimum 20-25 minutes in the oven, and Troy completely under cooked it. It’s so raw in fact that Gordon won’t even take a taste from the outside. Joe says the Romesco sauce is delicious and Joe reminds him that he should have had that second thigh cooking to make sure he had one cooked properly.

Next up is Dara with her soy & ginger wings with pickled vegetables. Graham says it’s beautiful the way she’s cleaned the wings, and Dara says the pickles are a family recipe. The wings could be the best thing he’s had the entire show, Graham says. Joe says “Wow”, it’s more than restaurant quality but could be a restaurant “signature dish.”

Alexander follows with his chicken liver pâté over garlic crostini, with balsamic glaze and a cherry reduction. He went with a board for plating to complement the rustic feel of the dish. Gordon says it tastes delicious. Joe says the dish is remarkable, not only beautiful to look at but truly a masterpiece. Troy seems to know he’s going home at this point, now that Dara and Alexander have done so well.

Jack is last – can his dish stand out as much as Dara’s and Alexander’s? He’s made chicken breast roulade wrapped in prosciutto with grilled asparagus and roast potatoes. Gordon says it looks beautiful, and he’s lost for words. It’s delicious, the chicken is moist, it was a very technical dish and he did a great job on it. Graham says it’s awesome, it’s moist and seasoned well and maybe the best thing Jack’s created so far.

The judges say it’s going to be one of their most difficult decisions to make ever. Troy thinks it’s going to be Dara and Jack. But who will it be? The first person going through is Alexander, they announce. The second is Dara. Jack and Troy are done. Troy seems composed about going home while Jack is in tears.

My thoughts on the semi-finals

I can’t say I was surprised to see Dara and Alexander as the final two; they would have been an easy pair to pick from early on. Not only were they two of the older “junior” chefs but they certainly had performed well, overall, from the start.

However, did they really have the strongest chicken dishes last night? That’s what I find a bit questionable. Alexander’s chicken liver crostini looked good, but to be honest that’s not that difficult a dish to make – certainly not if he had received any instruction or guidance ahead of time. And considering he said he’d never tasted chicken livers before, let alone prepare them, don’t tell me he didn’t get some guidance in coming up with that dish and how to prepare it (he was shown trimming and prepping the livers in a way that I don’t think most home chefs would know how to do, let alone a kid who had never even eaten chicken livers before.)

Dara’s wings and pickled vegetables looked good, but again perhaps not the most challenging plate presented. Asian-pickled vegetables are something I prepare almost every week in some form or fashion; it’s a simple dish to make with a quick pickle in rice wine, sugar and perhaps just a touch of salt.

Meanwhile, Jack has prepared a roulade of chicken breast! And it was actually cooked through to the center and moist, something it seems most of the adult MasterChef contestants can’t get right half of the time. Plus he prepared side vegetables that looked beautiful and received no complaints.

I really feel like Jack deserved to be in the finale, if the choice was really just based on these chicken dishes alone, and not overall performance. Because it’s true, Jack may not have had as many standout dishes as Dara and Alexander, but he’s done well overall and certainly performed terrifically for his younger age. It didn’t quite seem right to me, but then again, I can’t taste the three dishes to say for sure like the judges did.

Your thoughts: did the judges make the right call?

Leave me a comment in the guestbook below to tell me what you think!


Fifty Shades of Chicken: A Parody in a CookbookCHECK PRICE

Chicken and Egg: A Memoir of Suburban Homesteading with 125 RecipesCHECK PRICE

For more on MasterChef Junior…