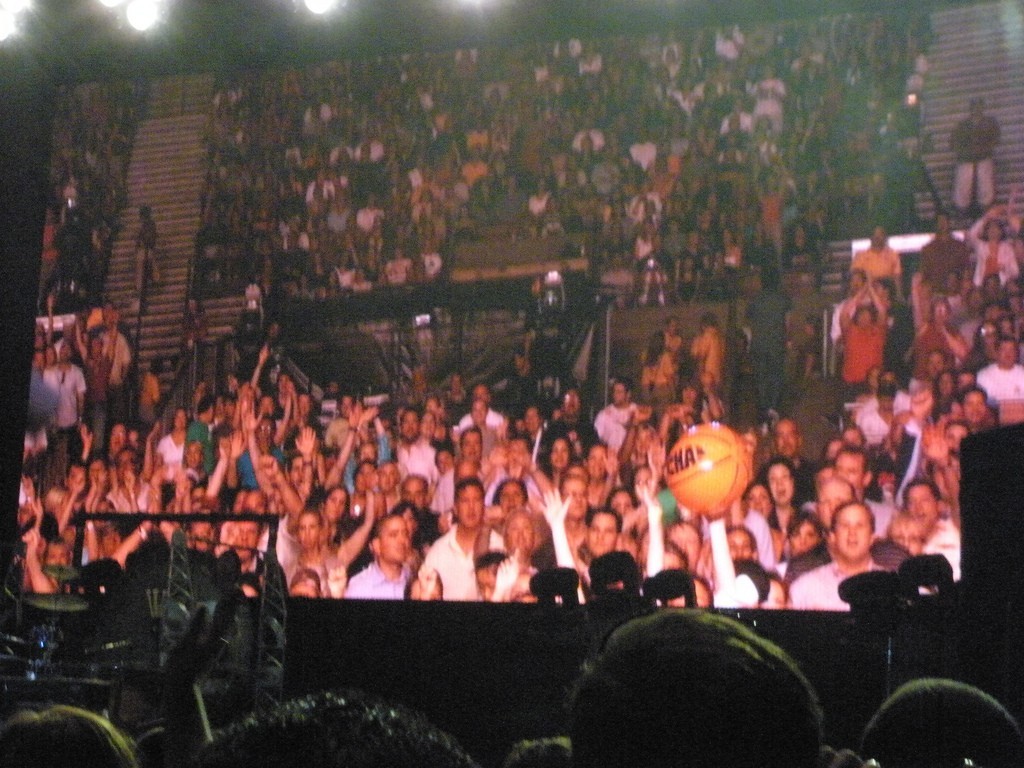 Have fun at the show – but don’t ruin it for others. All photos below by the author, sockii.

No doubt it’s happened to almost all of us at one time or another. You save up and splurge on tickets to a rock concert or show you’ve been looking forward to for ages. The anticipation and excitement leading up to the show is tremendous. Maybe you’ve been waiting years, even decades, to see a particular act or specific musician live. Maybe it’s someone who only tours rarely, or you’ve just never had the chance before to see them. Maybe it’s a band you see every year they’re on the road, but it’s always one of the highlights of your summer.

You get to the venue, find your seats, and everything seems perfect – until that person shows up. That single individual with a seat beside you, in front of you, or behind you who manages to ruin the entire show with his inconsiderate behavior. There’s often not much you can do about it, either, unless alcohol or drugs are involved to such an extent that the disruptions become obvious to the ushers and the offender is escorted from the building—or passes out from over-indulgence.

Below are some of the most rude and obnoxious things I’ve personally encountered at rock concerts. They can ruin the entire experience for other concert goers, or at least dampen one’s enjoyment of a long awaited event.

Does any of this behavior sound familiar to you? If you might have been guilty of it in the past, think twice before going to another show and engaging in such behavior again!

Don’t Be a Seat (or Space) Thief 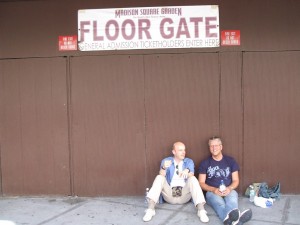 These fans are waiting all day to be at the front of the floor for a concert. Don’t steal their space!

Whether in a General Admission or Seat-Assigned venue, no one likes a space thief.

If I’ve been on my feet for hours, maybe even an entire day, to secure a spot at the front of the GA pit, right along the barricade, don’t try to squeeze me out or push me aside the moment the band comes on stage. If I’ve got great aisle seats near the front of the floor, don’t try to ooze into my space from your seats further inward, or block the aisle by rushing to the front when your seats are way in the back. I’ve had women try to step into the tiny space between my chair and the row in front of me, blocking my view and whining when I told them to back off.

I’ve had huge brutes try to push their way through crowds of younger, smaller women just because they think they can intimidate everyone around them. You got the seats you got; stay in your spot and respect the spaces of others. 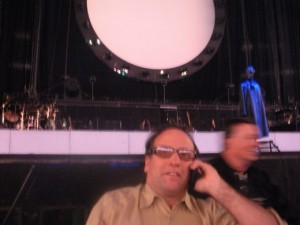 I’ll even yell at my sweetie for doing this: once the show starts, put the phone away!

We’ve probably all run into this guy at a rock concert: The one who spends an entire concert calling up his friends to brag about what concert he’s at, and what a great seat he has, and it seems like the only reason he even went to the show is to brag about it since he’s clearly not listening to the music.

Or the chatterboxes who spend the whole concert, even any soft, quiet numbers, shouting over the music to talk about seemingly everything except the show going on in front of them. Both types of behavior are extremely rude and disruptive to others who might actually, shockingly, be there to focus on the music – not the personal lives of strangers around them.

Wave Your Banner Sparingly – If You Must Bring One at All 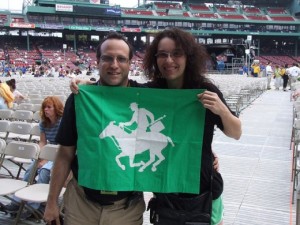 Keep your banner small – and don’t fly it all the time!

More and more concert venues are banning the display of crowd banners – most thankfully. There’s nothing like having the view from your fabulous fifth-row seats blocked by some jerk who’s got to wave his hand-written banner on a giant bed sheet about how “It’s my birthday!” or “I love you!” all night long. Here’s a pro-tip: most rock stars don’t care. If you really need to bring and wave a banner to draw attention to yourself, save it for the least annoying moments, such as between songs, or if/when the object of your banner’s focus is right in front of you and might actually see it. And once/if you’ve been acknowledged, put the silly thing away. Your concert neighbors will appreciate it. When fans of Stewart Copeland organized a flag project for the 2007-2008 Police Reunion Tour, there were strict rules of conduct enacted so that their small banner could make a showing at as many concerts as possible, without being obnoxious to other concert goers. It would be great if other fans could follow such a lead.

A Concert is Not a Non-Stop Screaming Contest

I generally always bring earplugs with me to rock concerts. Sometimes I need them less for the decibel level coming from the amplification system than for the people around me who feel the need to screech, whistle, and yell out song requests through the entire show. Expressing enthusiasm is one thing. Being a loud, obnoxious jerk is another.

Take Off Your Giant Hat, Please

Some of us are vertically challenged, so it’s bad enough when there’s a tall person sitting or standing before us in a crowd. It’s just doubly-annoying when that person decides to wear a giant, floppy or high hat for the entire show. Leave the fashion statement at home, please.

Have these people forgotten where they are? It’s a rock concert, not a symphonic hall performance!

Rock is meant to be enjoyed, and for many of us that involves dancing or at least moving to the music, on our feet. Of course, if one is in a section where everyone is staying seated, it would be rather inconsiderate to be the only person up flailing about. In such a case head to the back of the section or somewhere else you can find the freedom to move. But if most of a section is on their feet, don’t be the one grumbling – or even throwing things! – at the person in front of you who is standing. That’s just not cool.

I’ve never understood getting so drunk at a rock concert that you ruin the experience for those around you – and likely retain no memory of the show the next day.

If you’re spending hundreds of dollars to go to a concert, wouldn’t you want to be able to remember it afterward? I’ve had drunks at a rock show fling their beers all over me, and once even vomit on my back. Another time I had a guy slump backwards, head into my chest. I thought he was making some kind of bizarre pass at me, but he’d actually passed out drunk.

Drunks are usually some of the most guilty of the other infractions listed above, such as obnoxious yelling and shouting, trying to steal other’s space, and then on occasion trying to start a fight when called out on their bad behavior. So have a beer or two if you must, during a show, but don’t turn it into a binge-drinking contest.

Be Respectful of Others When Taking Photos or Video 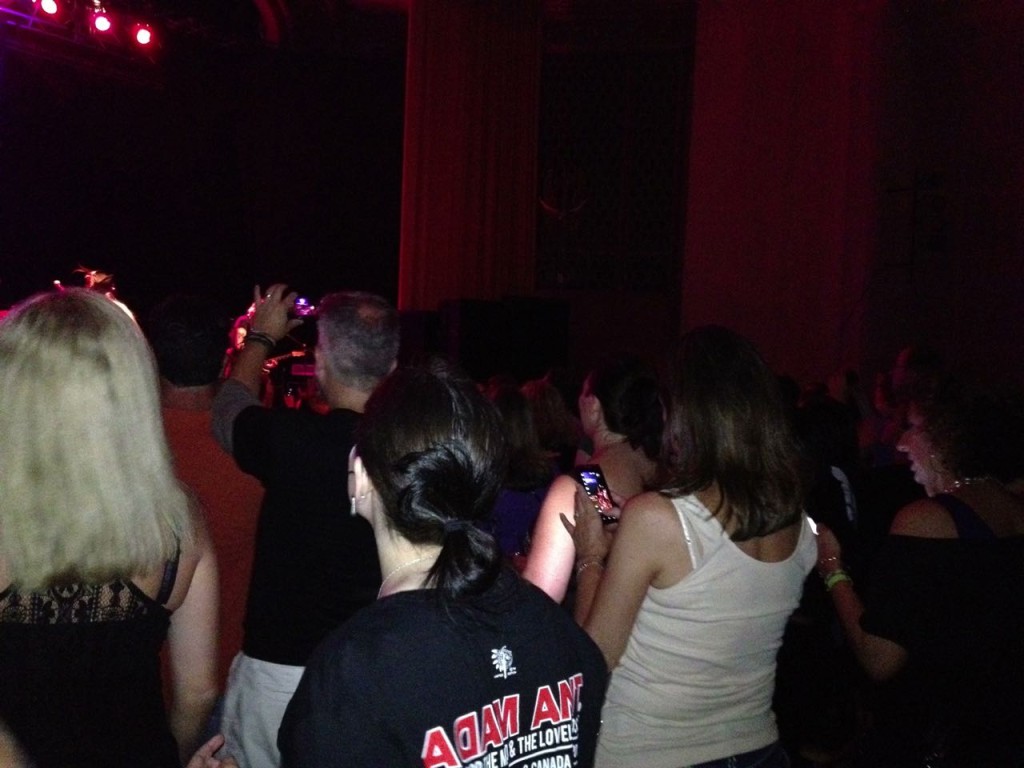 Are you even paying attention to the music, or just spending the entire evening trying to get photographs to prove you were there?

Modern technology has made it much easier for everyone to take their own photos and videos at concerts. But it gets annoying to those next to or behind you if you’re constantly holding your camera up high, in their line of view, to get shots above the crowd. And who wants to spend an entire concert staring through a camera lens instead of enjoying it with your own eyes?

This has gotten increasingly annoying as smart phone technology has improved. Some shows it seems like everyone is just watching the show through the Android or iPhone. What happened to going to the show to enjoy the music?

Going to a rock concert is all about enjoying music you love and having a good time while doing so. But make sure that your good time doesn’t interfere with the ability of others to experience the same. I’ve listed my biggest pet peeves about poor concert behavior in this article – what are some of yours?