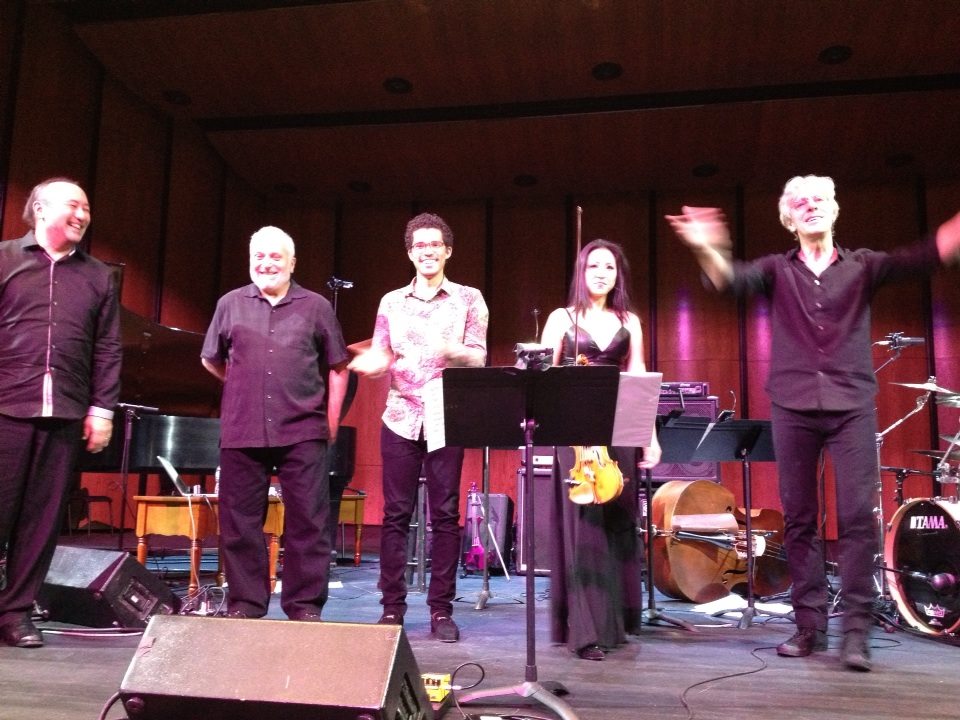 An impressive ensemble of talented, diverse musicians recently completed a 5-date tour of college concert halls across the United States. Led by legendary drummer and composer Stewart Copeland and award-winning pianist Jon Kimura Parker, the band led listeners “Off the Score” with an energetic, challenging, and varied collection of music that ranged from Igor Stravinsky to Outside, from re-interpreted Police songs to newly-commissioned classical work.

Joining Copeland and Parker on this musical journey was young violinist Yoon Kwon, who began her professional career at only 13 an has been a member of the first violin section of the Metropolitan Opera Orchestra for nine seasons. Marlon Martinez, on double bass, has been studying with the legendary Stanley Clarke since he was fifteen. (Clarke himself has collaborated with Copeland on numerous projects including their band Animal Logic.) Last but far from least was Judd Miller, a leading proponent of the Electronic Valve Instrument (EVI) who has been frequently involved with Copeland on his movie and television soundtrack work since the 1990s.

I was fortunate enough to catch the last two performances of this unique band’s tour: March 27 in Indianapolis, Indiana at Clowes Memorial Hall  and March 28 in Sewanee, Tennessee at Guerry Auditorium. Based on these two performances, I do hope we’ll be seeing more out of this ensemble in the future. They were far too impressive together to be only a short-lived collaboration.

The set list was the same for both performances that I attended, save for the second encores. The evening began each night with “Birds of Prey”, a bright and frenetic composition originally from Copeland’s 1994 ballet “Prey”. I’ve heard several different performances of this piece through the years and I must say this ensemble’s interpretation is my favorite to date. It’s a complicated and somewhat busy composition which I’ve seen larger groups struggle with; here, with just five exceptionally skilled musicians, the music soared as it was truly meant to.

After starting the evening off with such a bang, Copeland took briefly to the microphone to introduce the band members and let the audience know a little bit about what to expect for the rest of the night. The next piece he introduced only as “Toronto”, although it’s listed in the program book as “Coincidence or Convergence?” Commissioned by the Royal Toronto Conservatory and set for its official premiere in May, we were told to forget hearing it immediately after it was performed—not likely! I’m always delighted to hear new music from Stewart and this was classic Copeland, starting softly and ominously on the piano before launching into a swinging, playful beat. Kwon and Kimura showed a strong feeling for the complex rhythms and melodic passages and on both nights I could see other members of the audience quickly getting into the mood created by this new work.

Next, Kimura and Copeland faced off against each other in a piano/drum improvisation battle set to Serge Prokofiev’s “Finale from Piano Sonata No. 7“. I cannot confess to being much of an expert on Prokofiev’s work (or 20th century Russian classical music in general) but this was a challenging listening experience, one I was better able to appreciate the second night knowing a little bit of what to expect. Apparently this finale has been described by others as “an explosive burst of rock ‘n’ roll with a chromatic edge” which certainly fits. Every time things seemed to be descending into atonal chaos, the two gifted musicians would pull it back together with thunderous intensity.

After that auditory assault, both the musicians on stage and the audience needed a little reprieve! Copeland departed for a brief break and Yoon Kwon took the spotlight for an achingly beautiful rendition of Astor Piazzolla‘s “Oblivion”. Accompanied by Kimura and Martinez, Kwon nearly brought tears to this listener’s eyes with the emotion and clarity she brought to the composition. Kwon then introduced the next piece, one where she’d have the chance to do some “fiddlin'” for a change: American composer Paul Scoenfield‘s “Who Let The Cat Out Last Night?” A fun and quirky mix of country and classical styles, it made for an amusing transition in the mood and showcased her and Kimura’s versatility.

Copeland and company returned at this point for a piece that strongly featured Martinez on the bass, “Rebop”. Originally written by Copeland and Stanley Clarke, you could close your eyes and just about hear Clarke himself here. And so much for Stewart’s frequent assertions that he hates jazz!

In another shift in mood, Kwon was again featured next in a pensive performance of Johann Sebastian Bach’s “Sarabande”. This perfectly led into Copeland’s “Celeste“, one of my favorite of his compositions, originally commissioned by Daniel Hope for the Savannah Music Festival in 2008. It’s delightfully playful and one of a series of pieces named after his daughters. “Right now Celeste is sneaking into her big sisters’ rooms to play with their toys. She is the Princess of Siam.”  Here is a 2009 performance of the piece, for those unfamiliar with its delights:

What then followed was an extended suite of music, beginning with Ravel’s “Adiagio from Piano Concerto in G” which was a perfect vehicle for Kimura’s talents on the piano. This led into Outside’s “To Forgive But Not Forget”, where Kwon rocked the electric violin for a change and the rest of the band followed suit on a trippy journey into electronica-land. Rounding out the suite was a joyful and swinging version of Mike Garson‘s “Jazz ‘Paganini’ Variations” where—as was so often the case both evenings—the band members seemed all smiles and as delighted to be performing together as we were to experience hearing them.

The final number for the main set was a selection from the “Rite of Spring”, Igor Stravinsky’s famous work which, as we were told, caused a riot the night of its premiere in 1913. There was no rioting in either Indianapolis or Sewanee, but the audience was on its feet both nights by the end. No one seemed ready for the performance to be over, and indeed both evenings the ensemble returned to the stage for two encores. The first was an instrumental reworking of “Darkness”, a favorite Copeland composition from his Police days. The bass and piano anchored this version, as in the original, which then gave each musician a chance to shine in a solo spotlight. For the second encore, Copeland apologized that they would have to play something they’d already performed earlier that night as they don’t have any other material rehearsed, but no one seemed to mind. In Indianapolis this second encore was “Birds of Prey”, and in Sewanee it was “Coincidence or Convergence?” 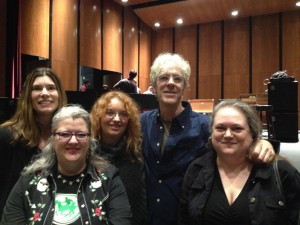 Fans (including yours truly) with Stewart Copeland, March 28 2015.

After the performance in Sewanee, many in the small crowd lingered behind to talk with the musicians as the crew packed up their gear. Most were of course waiting for Copeland, who came out after his ritual post-performance shower. He was as gracious and generous with his fans as I’ve always found him in such situations, a non-stop whirl of energy on and off stage—just ask anyone who tried to get a non-blurry photograph of him!

Our group of traveling “Nutters” (as Stewart calls us) who had filled up most of the front row that night had a chance for several group photos and to chat about what is coming up next on Stewart’s schedule. In just about two weeks, he will be in Dallas to attend the premiere of “Dare to Drum”, a documentary about his 2011 collaboration with D’Drum and the Dallas Symphony Orchestra. One more performance by the Off the Score ensemble is scheduled for May 20, 2015 in Toronto for the 21C Music Festival, but again I hope there will be more shows in the future so that others may enjoy this impressive band for themselves. It’s not often one gets to experience a single evening of music combining classical compositions, rock and roll, jazz improvisation and electronica—and to have it work so well together.