Jazz lore tells it, that in 1969, before Jimi Hend 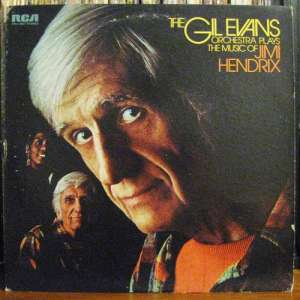 rix met his demise, he had discussed a collaboration with the jazz arranger Gil Evans and jazz trumpeter Miles Davis.

Believe it or not, Jimi even discussed bringing Paul McCartney into the group. The timing was never right, as the Beatles had their own issues, and Miles his, and so the window closed on such a dream as the Sun set on Jimi’s life in September of 1970.

One project that was released after Hendrix’s death was the Evans’ collection of Hendrix tunes done jazz orchestra style.

Now I know this may sound strange, and believe me most of the purists didn’t like this music, but Gil does a wonderful job, presenting the spirit of the Hendrix music and actually putting his own gigantic stamp on the music.

Gil Evans was not a prolific recorder, but when he did, it was good stuff, so if Gil collaborated with you, or did his take on your music, you were special indeed.

Since I am an avid fan of modern progressive big band music, as well as progressive rock and jazz rock fusion, logically there was a chance I’d like this.

Gil Evans Plays the Music of Jimi Hendrix released in 1975, is a combination of all those styles and I find it to be a spectacular performance. The highlight tracks for me are ” Voodoo Chile’ Slight Return” A tune best known for Jimi Hendrix’s guitar wah-wah driven intro.

On this particular rendition of “Voodoo Chile'”, it’s the use of the most awkward instrument of them all, the tuba! Played expertly by Howard Johnson.

To replace the lead guitar in that song with the tuba, is one of craziest things I have ever heard of in recorded music, yet somehow it works. Howard Johnson has to be given credit for doing his best Hendrix impression, it is a startling performance to say the least.

The album is a wonderfully conceived compilation of other Hendrix songs, my favorites being “Angel”, “Crosstown Traffic”, and “Up From the Skies”. The textures and instrument combinations are wonderfully executed, the music breathes. If you are a rock fan, there is enough of the real rock vibe going on to keep you interested too.

This music was not appreciated by those Jazz establishment types who like their jazz as a museum artifact, not a living breathing organism, where surprise is a rule not an exception. I like all kinds of music, and this album is for the open minded.

This particular vinyl copy featured here from my collection, was found for less than 10 dollars, you could easily find a copy yourself for a similar price now.