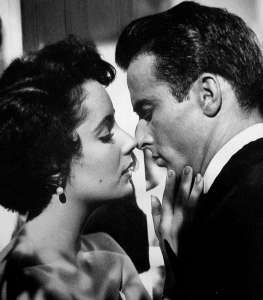 Elizabeth Taylor and Montgomery Clift were two of the biggest young stars in the movies by the late 1940s. It was inevitable that Hollywood would pair these popular actors together on the silver screen. A Place in the Sun turned out to be the first of three movies they would appear in together.

I’m sure almost anyone would agree that Taylor and Clift made a great movie couple. They had a very strong chemistry together, both on and off screen. They formed a friendship while filming A Place in the Sun that would last until Montgomery died when he was only 46.

It’s hard to believe, but Elizabeth was only 17 when this film was made. It was one of her first adult roles. She’s absolutely beautiful, and her wardrobe alone makes the movie worth seeing. It’ was filmed in black and white, but it works well here.

What A Place in the Sun is About

Theodore Dreiser wrote An American Tragedy in 1925 ,basing his novel on real life events. The story of romance, scandal and heartbreak was a perfect one for the big screen. Hollywood’s version was somewhat different, but  still largely based on the tragedy that  occurred in the early 1900s. All the characters were given different names.

George Eastman (Montgomery Clift) was a drifter who moved to a small town to work for his wealthy uncle Charles. George was raised in poverty, and had nothing in common with his affluent relatives, They treated him like an outcast. The only exception was Charles, whom George addressed as “Mr Eastman” rather than Uncle.

He was hired at first to do menial jobs. George began a fling with a shy young woman he met at work named Alice (Shelley Winters), even though dating was forbidden between co-workers. George desperately wanted to escape his dreary life and wished he could enjoy the same lifestyle that George and his family took for granted.

George’s life changed forever when he met a sweet and charming socialite, Angela Vickers (Elizabeth Taylor) at a party. The two became smitten with each other. George did not end his relationship with Alice, even though it obviously would have been the right thing to do. He didn’t  have the courage to break up with her, so he led a double life. Angela knew nothing about Alice, but Alice eventually found out about Angela.

Things got really complicated when George and Angela wanted to get married, and Alice announced she was pregnant. Alice was well aware that George did not love her, but she was determined to marry him anyway. Also by this time, George had impressed his Uncle enough to give him a big promotion at work. George was finally beginning to realize his dreams.  What lengths would he go to in order to remain with Angela, and be done with Alice?

My Thoughts On A Place in the Sun

There is one aspect of this story that is obviously dated. A single woman having a baby is not a scandal today, but it certainly was in 1951, when this movie was released. Aside from that, however, the story is an ageless one.  I consider this to be the quintessential love triangle.

George made a fateful decision to get involved with Alice because he was bored and lonely. Alice would not give him up, because she feared no one else will love her. Angela was overjoyed to have found the love of her life, unaware he was living a big lie and deceiving her. George may be a cad for his behavior, but he’s a sympathetic character regardless. That’s what made this movie so compelling and ultimately heartbreaking.

George was a social climber, but he  really did love  Angela.  He wasn’t willing to take responsibility for his actions, and that is what eventually caused is downfall. He was motivated not only by his love for Angela, but greed as well. My favorite scenes are the ones at the Eastman party where George and Angela first met. Their dancing together was so romantic and lovely. They also share one of the best screen kisses from any movie of that era.

Montgomery Clift is excellent as George. He shows all the emotions you would expect George to have as the story unfolds. Elizabeth Taylor as Angela is equally good, playing a character that is at times very naive. In the end she shows a very strong maturity beyond her years.

Shelley Winters is wonderful as the dowdy, introverted Alice. Her anger is palpable as she realizes she has been lied to. Shelley apparently really wanted to play Alice, as it was an extreme departure from her other roles to that date. She dressed down for her screen test in order to prove she could convincingly be that character.

In later years Elizabeth Taylor and Montgomery Clift would appear together in Raintree Country and Suddenly, Last Summer. A Place in the Sun is the best of the three in my opinion, and one of Montgomery’s best roles. 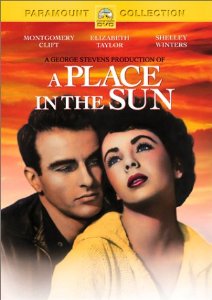 A Place in the Sun. See it on Amazon.