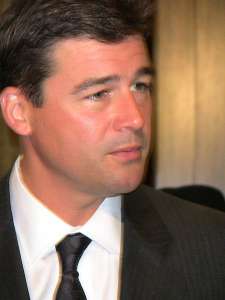 Early Edition was a fantasy/drama that was featured on CBS from 1996 to 2000. This show was a crowd pleaser: something you could watch with friends on a Saturday night, along with Dr Quinn, Medicine Woman, which aired immediately before.

What made the show so appealing? Well, it didn’t hurt that Kyle Chandler. one of the hottest men to ever appear in a series, played the lead character. The scenario of the show was unusual. It was something that had never been attempted before. It was innovative, intriguing, and good entertainment for all ages.

The program was filmed on location in Chicago. Many familiar Chicago landmarks are featured in the show, which are interesting to see.

What Early Edition is About

Early Edition is about a guy named Gary Hobson (Kyle Chandler) who receives a newspaper each morning with stories that are a day in advance. A big, orange cat always delivers it at the same time every day. Gary has foreknowledge of future events, both bad and good. He then spends the day doing what he can to prevent tragic events from occurring.

Gary must do this while others remain unaware of his knowledge. Only a handful of people know about the newspaper, including two  friends, Chuck (Fisher Stevens)  and Marissa (Shanesia Davis-Williams). Gary has no idea why he mysteriously receives this news, or why he was chosen to be the one to stop tragedy from happening. However, he decides he is going to use it for good, rather than for profit.

Chuck would like nothing more than to make money from reading tomorrow’s news. That’s the way many would react. In a similar situation, many people would like to know the winning lottery numbers,or which sports team was going to win the big game. However, Gary will have none of that. He’s not even tempted to profit on what he knows.

Gary Hobson is a heroic man, but he’s not a saint. He sometimes feels conflicted about what he is doing. After all, a huge responsibility has been given to him. He doesn’t understand why an ordinary guy like himself was given this gift. Once in awhile he must make tough decisions by choosing which person he is going  to help at any given time. This is one aspect of the show that makes it so interesting. What would you do if you were in Gary’s place? This question is asked during the opening narration. It’s a fascinating thing to ponder as we watch Gary problem solve and help others, who are unaware of the imminent danger they are in.

The supporting cast are excellent. Chuck’s initial motives may have been selfish, but ultimately he was supportive of Gary and believed he was doing the right thing. Marissa had a very compassionate nature, and she provided a lot of emotional support. She’s the type of person anyone would like to have for a friend. Fisher Stevens left after the second season, although he returned for guest appearances.

Early Edition is an uplifting, positive show with good values. If you like a family oriented drama with a heavy dose of fantasy, you will enjoy this series.

Check out this clip of Kyle being interviewed by Ellen. Kelly Clarkson is  not the only woman with a huge crush on Kyle!

I was not the only person who was heartbroken when the program was cancelled. A petition was sent to CBS (which I remember signing) asking them to reconsider the cancellation. However, CBS did not reverse their decision.

Many people remain fans of this excellent program. Three fan conventions have been held in Chicago since it ended. We also have had a long wait for Early Edition to appear on DVD. So far, only the first two seasons have been released. I’m hoping the remaining two will be available soon, but there has been no announcement about this. 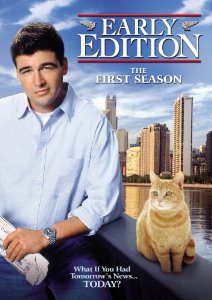 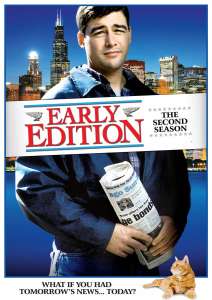