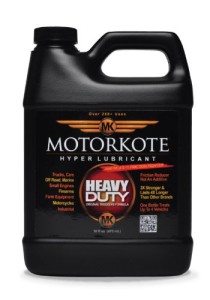 I have been a fan of the American Truckers Network radio program that originates out of Cincinnati Ohio. Usually I can last the first few hours of the show, as it starts Midnight Eastern time.

For many years, the makers of Motorkote would buy entire 4-5 hour blocks of programming on the late night radio program.

Basically the show was an infomercial for the product, but the quality of these shows were quite high due to the ATN hosts Steve Sommers or Bubba Bo. Also company spokesman Ed Gibbs, as Mr. Motorkote comes across as a genuine guy.

Check out Motorkote for yourself

Over time the regulars were calling in and offering info on what they use the products on, or asking when the network would be going to have another infomercial so they could get special deals.

This really made me think, “Man this must really be a quality product”.

Honestly, I don’t see these veteran truckers being giddy with excitement over something they didn’t find useful. Everybody really seemed to think the friction fighter worked to make their gas and diesel engines run smoother.

What do I use Motorkote for

I own a compact car that typically gets 32/38 MPG. But after heavy use my little gas saver was not really doing all it could, it was running hot, and not idling well.

I put the Motorkote Hyper Lubricant in after my oil change, and it was not long I did notice a difference, mainly the idling was smoother right away, and I noticed the fan would not come on at all sometimes at a drive thru.

I also noticed my gas was lasting longer. Before the friction fighter, I would fill up and maybe get 300 Miles before the next 10 Gallons, now I would get 350 miles easy.

One time on an interstate trip, I squeezed 370 miles out of fill up. The friction fighter worked for me without a doubt.

I now use the Fuel Optimizer as well as the spray lubricant. I can promise you this, that Spray Lubricant

is the best by far I have ever used.

Motorkote Hyper Lubricant only has to be used every 4th oil change, but better results have been reported with more frequent use, only you can judge for yourself.

What About Motorkote Fuel Optimizer Other Uses?

I started using the fuel optimizer after I thought the engine treatment did such a fine job. I honestly don’t know if my little gas saver is responding any better or not, we are not talking about a high performance engine or anything.

I did use it when It looked as if my 10-year-old lawn mower was passed the point of saving. I just put a cap full in with the tank of gas, primed and waited 15 minutes…

That sucker started up with ease, I had spent 2 days trying to start it, the fuel optimizer just blew that grime right out I guess? I suppose this is what it does for your car as well? I have done this with the mower for many summers in a row for that first spring start. I also use a few caps of the hyper lubricant mixed in with the oil.

After years of using the above mentioned Murray push lawn mower, I was forced to replace my old mower because of a non engine issue. The used lawn mower I replaced the Murray with was a 50 dollar Honda push mower.

The first 2 cuts without Motorkote mixed in seemed to be a gas hog, a little less than a 1/2 acre lot was using a full tank of gas. I noticed after the motorkote mixed with the oil, I now get 2 cuts per tank.

I realize this isn’t scientific, perhaps only a coincidence?  I know I have not had a mower give me that type of use per gallon of gas before.

Still using this product, and yes I still stand by it. The fuel optimizer has made a difference in my Yaris, and my Wife’s Chevy Cobalt. Start ups improved, and I personally notice a difference in performance after using it in both cars.

Been using these products for over 6 years now

Don’t forget those truck drivers out their hustling day and night over the road, many times working the holidays away from their families so we can enjoy stocked grocery shelves.

I marvel how the trucker keeps plugging away year after year with many times unreasonable Government regulations, these guys deserve a better deal, but yet they keep on truckin’ because it’s in their blood..

Don’t forget to read all the directions carefully for the Motorkote products you choose, make sure you have the exact product for the job you need it to do. You wouldn’t want to put the fuel optimizer where the hyper-lubricant is supposed to go, yeah don’t do that!

Photos used with permission via Amazon.com