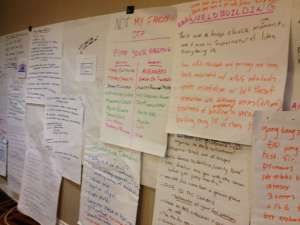 A CON.TXT tradition: panel notes posted along the hotel corridor. Photo by sockii.

Two weekends ago (June 13-15, 2014) I attended the CON.TXT fan convention, which is held biannually in Silver Spring, Maryland. CON.TXT is a slash-focused, multi fandom convention, so it is always interesting to see what are the most popular fandoms at the moment which will get a lot of attention in panel discussion, artwork, music videos and conversation. This year it was certainly the Marvel universe, including the recent release Captain America: The Winter Soldier and the television series Agents of S.H.I.E.L.D. But even if you weren’t into superheroes and comics universes, there was a lot to discuss and a good time to be had catching up with old friends.

CON.TXT was first held in 2006, and since then has typically seen around 170-200 attendees, according to figures reported at Fanlore and also my observations (I’ve attended as a dealer every year except 2010). This year it seemed slightly smaller; at the convention I saw mention of about 140 attendees this year. The dealers in the con suite were also fewer than normal—only five of us, three of whom were primarily/only selling jewelry. There was also one dealer selling fanzines and one selling some fannish merchandise such as mugs and t-shirts. Noticeably absent this year were any of the small press LGBT publishers, such as JMS Books, whom I used to see at the convention in the past. I was disappointed not to see any of them there as I have been reading far more “original slash”/gay fiction these days than participating in media fandoms and was hoping to find some new books to read. But perhaps they have not had good sales at this convention in the past and have since given up on attending?

I can say that my own sales were very slow, only about one third of what I used to be able to bring in at this convention in its early years (2006 and 2008). Lots of people were bemoaning the economy and not having the money to spend as they used to, something I’ve noticed across the board at the conventions and craft fairs I’ve been attending.

As sales were slow, I took the time to attend several panel discussions which had looked interesting to me (and they were scheduled against big Marvel topic panels in other rooms, so I figured no one would be shopping during those hours!)

The first was on the topic of “Monetizing Fandom”, a subject I always find interesting (and personally relevant as someone who is, in a way, “monetizing” my fannish interests by writing about fandom topics here on Spacial Anomaly, as a convention dealer, and someone who has in the past done fan art for profit.) There were only a few of us present for the panel but it was a very good discussion. We started out simply trying to determine why it was that monetizing fandom is seen as so “evil” to many in fandom and why so many double standards seem to exist. Why is it that, for much of fandom’s history, fan artists have always been rewarded with commissions and auction sales of their work, but to write fanfic for pay is verboten? Is it just another symptom of how society does not value “women’s work” as much as men’s work and interests? And what of fanfiction writers who end up going pro, like E L James with 50 Shades of Grey (a book which, if you are unaware, began as a Twilight AU fanfiction story.) Some such authors are still well liked in fandom and congratulated for turning pro; others, like James or Cassandra Clare, burned a lot of fannish bridges on their exit from fandom and as such tend to be looked upon in a negative light by many of their former “fans”.

This was overall a really good discussion although it was a little fanfic-centric for my tastes; I would have liked the topic of discussion to be a little more open to other aspects of monetizing fandom and their legalities. 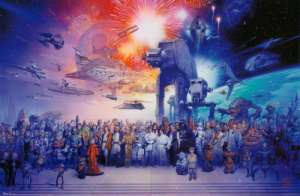 Star Wars – still as popular as ever? Image available at AllPosters.com.

The second panel I attended was on Star Wars and what fans were looking forward to—or dreading—in the new movies currently being produced. This was a very lively discussion that covered a lot of the history of Star Wars fandom developments and George Lucas’ strengths and weaknesses as a writer and creator. A lot of people at this panel worried about the possible “Disneyfication” of Star Wars, although with the caveat that Lucas was largely writing for kids/a young audience already. Many expressed disappointment that the upcoming movies weren’t scheduled to follow the timeline of the Expanded Universe, although we may still see some of those characters and story lines play out in different ways in the films. I mostly sat back and listened to this panel as I’ve (purposefully) avoided a lot of the spoilers and discussion of the films to date, but wanted to know a little about what had been “leaking” out to the fandom so far.

The third panel I went to was the “Small Fandom Support Group”, which was definitely the largest—and liveliest—of those I sat in on. This panel was, in my opinion, a bit chaotic and not as well moderated as it could have been. Perhaps it was just too large of a topic to cover, and issues in small television/film fandoms are different from issues in small comics or small RPF or small anime fandoms. The moderator was definitely coming from the media/tv side of things and the atmosphere got a little uncomfortable as she argued with one attendee over archiving small fandom fic at Archive of Our Own (AO3)  versus smaller/fandom specific ones. While I agree with the moderator that AO3 can bring some extra traffic/readers to small fandom fic (if you tag it well, making sure as I suggested to include any tropes/kinks that people will read no matter what the fandom), she seemed unwilling to accept that for many small fandoms, having a dedicated specific archive is more useful and effective—and they don’t all disappear suddenly or are necessarily less stable than AO3. It got kind of awkward after that, to the point of some attendees raising their hands to speak, only to tell the mod to please let this other person speak who’d had her hand up for a long time but was now seemingly being ignored. There was also a lot of debate/disagreement on whether writing AUs or “fusion fics” with more popular fandoms was a good way or not to draw in readers; some people like them, others hated that in archives like A03, their small fandom categories are difficult to navigate through with seemingly every other story turning out to be a fusion or AU largely focused on another fandom. 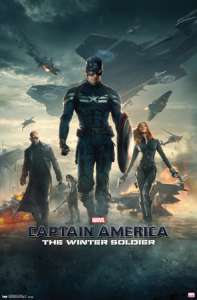 Captain America 2: The Winter Soldier – one of the popular fandoms this year at CON.TXT. Poster available at AllPosters.com.

As in the past, the Saturday night vid show was one of the major events at the convention. It’s been a number of years since I was active in fan vidding, so I was curious to attend and see how the medium may have evolved and changed since I was involved. There were a few vids that I thought were truly excellent; they worked as having a cohesive narrative, a great match of music to source/video, and were wonderfully entertaining. “Big Spender” for Person of Interest, “Disarm” for Harry Potter, and “Wishin’ and Hopin'” for White Collar were probably my three favorite in this category. I also loved the Alexander/Kings/Merlin video “The Lightning Strike”, which did an excellent job of tying together the three different fandoms, showcasing the parallels in character relationships.

A number of the other vids were less successful to me, seeming to be nothing but a lot of random, heavily edited clips set together to frenetic dance/modern-rock music that didn’t come together in a really cohesive way. Or, I just felt that the musical choice did not work with the source material—a Taylor Swift song being used for an Interview with the Vampire vid, for instance. By the end of the night my eyes and ears were pretty overloaded from all the fast editing, flashy effects and loud music. I had been thinking about going to one of the after-show room parties but was too worn out.

All in all, I had a good time at the convention even if my sales weren’t much to celebrate. In two years I might attend again, but I’m not sure I would return as a dealer—I might just go as an attendee to see some friends and chat about fannish things for the weekend, we’ll see how things go.