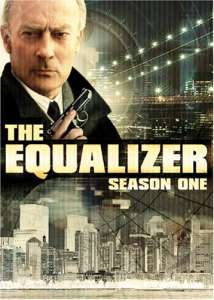 The Equalizer Season 1 on DVD. Buy it now at Amazon.

Another great action series of the 80s, one which had a more thoughtful and serious tone than many others of the decade, was The Equalizer. The series ran for four seasons on the CBS network, from 1985 – 1989, and combined vigilante-style action with undercurrents of political Cold War intrigue and spy drama. The continued cult following and popularity of the series has been such that a cinematic remake starring Denzel Washington is scheduled for release later this year. But can this new version capture the imagination and following the same way that the original did? That remains to be seen.

The Equalizer was a TV series about a former spy named Robert McCall (played by wonderful English actor Edward Woodward), who is retired from a CIA-like organization simply known as “The Company”. Based out of New York City, McCall now works as a private investigator-slash-vigilante, helping people in trouble who cannot receive assistance through normal channels. His clients find him via a newspaper ad with just the text above (oh, how times have changed…I wonder if “new” McCall with use a Craigslist ad instead, in the film remake?)

McCall mostly works alone, however he does have regular interactions and run-ins with others from his past. Those include “Control” (Robert Lansing), the New York head of The Company. Mickey Kostmayer (Keith Szarabajka) is a younger agent still employed by The Company, who helps McCall when he is not overseas on assignment. In between jobs, McCall is also trying to rebuild a relationship with his now adult son Scott (William Zabka), who goes from being resentful and critical of his father’s past to actively taking part in his current work and life.

Woodward would suffer a heart attack in 1987, which lead to a shift in focus of the series to reduce his workload and cover for him during his recovery. Another retired “Equalizer” was introduced, Harley Gage (Richard Jordan) and Robert Mitchum also joined the cast as Richard Dyson, a former higher-up at The Company and a good friend of McCall’s. In total 88 episodes of the series would be filmed and aired.

Numerous elements added to the lasting appeal of The Equalizer and makes it a series still well worth viewing today. The caliber of the acting was top notch, not just from Woodward and other regulars but from many notable guest stars. Some of those guest stars appeared on the show before they became breakout stars elsewhere: John Goodman, Kevin Spacey, Christian Slater and Macaulay Culkin, to name a few. The series was filmed on location in New York City which meant it could also employ actors working in the theater district at the time, such as Terrence Mann, Christine Baranski and Kevin Conway. Musical stars of the time including Adam Ant, Adam Horovitz (of the Beastie Boys) and Meat Loaf also made appearances.

The show also perfectly captured the gritty, dark and “dangerous” atmosphere of 80s New York like none other I’ve seen. My mother was working as a lawyer in Manhattan and living in Brooklyn at the time, so I spent plenty of time in NYC in the 80s and recall it as so different from the glossy, glittery and much safer place than it is today. Watching episodes of The Equalizer make me remember those days when every dark alleyway and empty street seemed filled with risk, when the Guardian Angels were a notable presence on the subways, and where people like McCall were what you needed to stay safe. 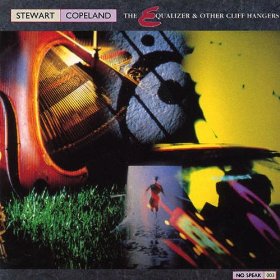 “The Equalizer and Other Cliff Hangers” album by Stewart Copeland. Buy it now at Amazon.

Also making the show stand out was the incredibly unique and noteworthy theme song and musical score by Stewart Copeland, drummer of The Police. The Equalizer was the first tv series Copeland scored, and the music was had a distinct percussive sound far different from anything else on the airwaves at the time. Some of the score would be adapted into tracks on his 1988 release The Equalizer and Other Cliff Hangers. (The Copeland tie-in to the series was of interest as well due to some speculation that the character of McCall was, in some ways, based on Stewart’s father Miles Copeland Jr., one of the founding members of the CIA.)

The Equalizer would enjoy a notable amount of popularity with fan fiction writers and ‘zine publishers in the late 80s through the early 90s, although it was never as popular as some other fandoms of the time. Equalizer fans wrote gen, het and slash fiction based on the series characters—Mickey Kostmayer and Control have been particularly popular with writers. Characters from the series would also appear sometimes in crossover stories with such series as The Man from U.N.C.L.E. and War of the Worlds. A small amount of current and older fan-fiction can be found today at FanFiction.Net and Archive of Our Own, and there is a dedicated Equalizer fan fiiction archive still actively updated today.

The first season of The Equalizer was finally released in the US on DVD in 2008, much to the delight of long-time fans who’d waited eagerly for an official release for years. However,  some of the original music used in the series was replaced (likely due to rights issues); the region 2 release from Universal Playback UK contained all the original music intact and uncut. Release of additional seasons in the United States has been delayed since, while they are all available in Region 4 format from Fabulous Films. In May 2013, however, Visual Entertainment obtained the rights for the series in Region 1, so U.S. fans remain hopeful that the rest of The Equalizer will eventually see the light of day on DVD in this country.

The Equalizer Resources and References